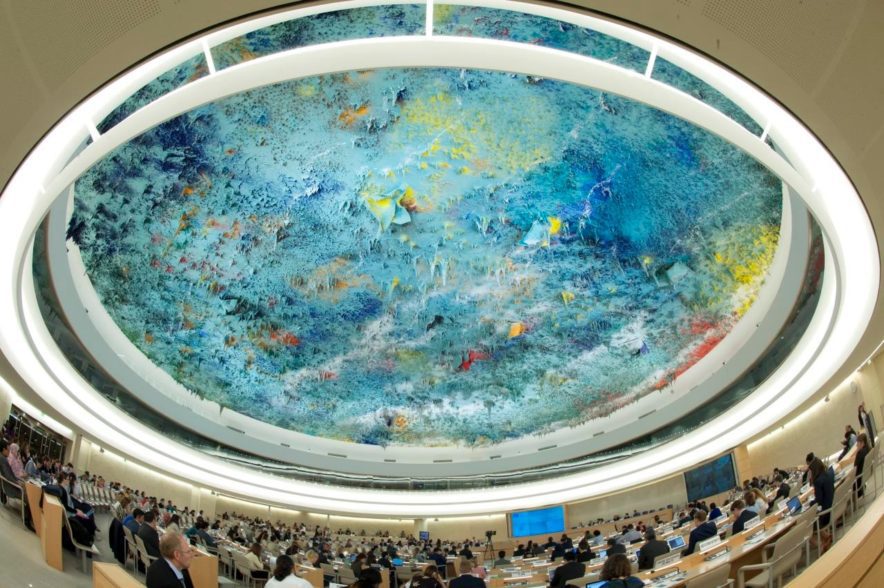 Heralded as one of the great innovations of the Human Rights Council (Council), the Universal Periodic Review (UPR) is a mechanism through which the human rights record of all 193 UN member States are reviewed by their peers. The UPR was conceived as ‘a cooperative mechanism based on an interactive dialogue, with the full involvement of the country concerned’, and to ‘complement’ the work of other human rights mechanisms. This mechanism provides an opportunity for States to present the steps they have taken to protect and promote human rights in their own country. At the same time it also provides States with an opportunity to exchange good practices and make recommendations to the State under Review on how to improve their human rights record.

When creating the Human Rights Council, the General Assembly tasked it with undertaking ‘a universal periodic review, based on objective and reliable information, of the fulfillment by each State of its human rights obligations and commitments in a manner, which ensures universality of coverage and equal treatment with respect to all States’. To this end the Council established the UPR Working Group, which consists of the 47 members of the Human Rights Council, and reviews the human rights’ record of all UN member States in four-year cycles. During the first two cycles all 193 UN Member States participated in the mechanism. The UPR is currently in its third cycle of reviews, which started in May 2017.

On average the Working Group reviews 14 States per session. These reviews are based on three types of documents: the national report containing information provided by the State under Review; the compilation report containing information based on reports of Special Procedures, treaty bodies, and other UN entities, e.g. UN Country Teams; and the other stakeholders report containing information from other stakeholders, including NHRIs and NGOs. The reviews take the form of an interactive dialogue between the State under Review (SuR) and UN member States during a session of the UPR Working Group. Participation in the review of a State, however, is not limited to the members of the Working Group, but open to all UN member States. During the dialogue States may ask questions, make comments and/or recommendations to the SuR. These are then compiled in an outcome report, to be adopted at the next session of the Human Rights Council under item 6. In this outcome report the SuR indicates if it accepts or notes (rejects) the recommendations received.

The review of each State is facilitated by a ‘troika’ of three States, who are members of the Council. Every SuR has a different troika, selected through the drawing of lots from the different regional groups. If requested by the SuR, one of the slots can be filled by a State from the same regional group and/or be substituted (only on one occasion). The troika can receive written questions raised by States and relay them to the SuR. After the Working Group session, it will prepare a report summarising the process.

During item 6 of a Human Rights Council session the 14 States under Review at the previous session of the UPR Working Group have the opportunity to further respond to questions and clarify their position on the recommendations received. Member and observer States moreover have the opportunity to make statements, as well as NHRIs and NGOs. On this occasion the Council also adopts the final outcome report of the Working Group and its Addendum.

The SuR will report on the implementation of their UPR recommendations at their next Review. It can also, on a voluntary basis, provide the Council with a mid-term report of progress already made halfway through the cycle.

For more comprehensive information on the Universal Periodic Review and the Third Cycle see the Universal Rights Group policy report ‘Towards the third cycle of the UPR: stick or twist?”

More information on how to participate with the UPR process can be found here.

To facilitate the participation of developing States in the UPR, particularly Least Developed Countries, the Human Rights Council requested the UN Secretary-General to set up a Voluntary Trust Fund for Participation in the Universal Periodic Review. In the same resolution, the Council also requests the Secretary-General to set up a Voluntary Fund for Financial and Technical Assistance to provide both financial and technical assistance to countries to help implement UPR recommendations, in consultation with and with the consent of the country concerned.

The first Voluntary Trust Fund allows for the financing of travel to Geneva by one official representative of a SuR or of a member of the troika in order to facilitate the universal participation to the UPR mechanism. It also allows for the financing of preparatory briefings prior to the sessions of the UPR Working Group. In 2017, government representatives from 15 States benefitted from financial support of the Trust Fund to attend sessions of the Working Group.

The second Voluntary Trust Fund, provides a source of financial and technical assistance notably to develop national capacity to implement UPR recommendations, to establish and/or strengthen mechanisms of follow-up, as well as to integrate support in the wider UN Country Team Programme on the UPR (for instance in the context of the UN Development Assistance Framework).

More information on the Trust Funds can be found here.