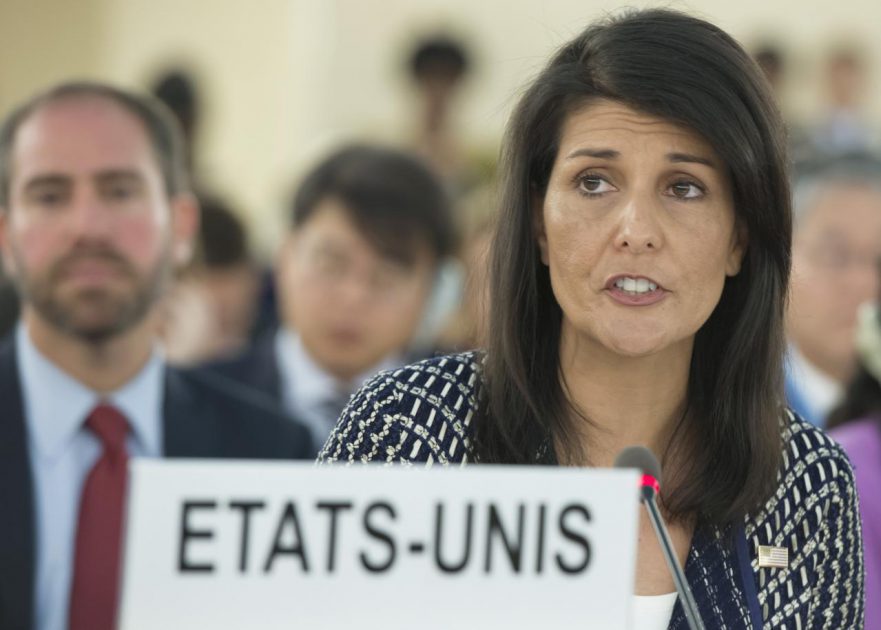 As expected, all the talk on day one of the 35th session of the UN Human Rights Council was on the visit of America’s Ambassador to the United Nations, H.E. Ms Nikki Haley, and the message she brought about the Trump Administration’s views and position on the Council and the US’s role therein.

In the end, Ambassador Haley’s visit to Geneva, which encompassed a speech to the Council, a side event on the situation in Venezuela, and a public event at the Geneva Graduate Institute, confirmed what many had expected: that the Trump Administration has still not made up its mind on whether the US should remain a member of, and stay engaged with, the Council (or with the UN’s human rights pillar more broadly) – or should pull out.

From Ambassador Haley’s demeanour and statements, it appears she, by instinct if not necessarily by conviction, leans towards the ‘stay engaged – for now’ wing of the US Administration. But only just.

During her speech to the Council she offered some praise for the body. For example, she acknowledged that ‘when the Council has acted with clarity and integrity, it has advanced the cause of human rights,’ and also recognised that ‘at its best – when it is calling out human rights violators and abuses, and provoking positive action – [the Council] changes lives, it pushes back against the tide of cynicism that is building in our world.’

However, such praise (premised, as it is, on a very limited interpretation of the Council’s mandate – which is far broader than just addressing situations of violations) was carefully juxtaposed with sharp criticism:

‘But there is a truth that must be acknowledged by anyone who cares about human rights: when the Council fails to act properly – when it fails to act at all – it undermines its own credibility and the cause of human rights. It leaves the most vulnerable to suffer and die. It fuels the cynical belief that countries cannot put aside self-interest and cooperate on behalf of human dignity. It re-enforces our growing suspicion that the Human Rights Council is not a good investment of our time, money, and national prestige.’

‘The Human Rights Council,’ she continued, ‘has been given a great responsibility. It has been charged with using the moral power of universal human rights to be the world’s advocate for the most vulnerable among us. Judged by this basic standard, the Human Rights Council has failed… The world’s foremost human rights body has tarnished the cause of human rights. The UN must now act to reclaim the legitimacy of universal human dignity.’

‘America does not seek to leave the Human Rights Council. We seek to reestablish the Council’s legitimacy.’

For that to happen, she made clear, she would need to see (and, more importantly, she would presumably need to ‘sell’ to the White House) ‘a couple of critically important’ reforms.

First, she said, the UN will need to improve the election process for Council membership, to prevent ‘the worst human rights abusers from obtaining seats on the Council.’

That would mean, in turn: an end to the practice whereby regional groups pre-cook ‘clean slate’ (i.e. non-competitive) elections so that, for example, 3 States ‘compete’ for 3 seats, (perhaps unsurprisingly, Ambassador Haley failed to mention that the US too has benefited from ‘clean slate’ polls); and the replacement of ‘secret ballots…with open voting.’

The URG has long argued in favour of Council electoral reform. As argued by Ambassador Haley, elections should, in all cases, be competitive, and candidates should be judged upon their commitment to human rights – as measured against the criteria set down in GA resolution 60/251. Unfortunately, it is difficult to see how, while respecting the sovereign right of States to stand for election, that the UN can formally prohibit ‘clean slates.’ What is possible however, is to encourage more States to stand for election (as of today, around 95 States – many of them democracies – have never held a seat on the Council, or even stood for election), to improve the availability of objective information about their commitment to human rights (this is the basic idea behind the Norway-URG portal yourHRC.org), and to ensure that voting States base their choices on that human rights information (rather than on behind-closed-doors ‘reciprocal support’ arrangements). On this latter point, Ambassador Haley’s proposal to replace secret ballots with open voting would probably help, though it would require a General Assembly resolution amending resolution 60/251.

One further idea not mentioned by Ambassador Haley would be to raise the threshold for election to the Council. According to GA resolution 60/251, candidates need only secure the votes of a simple majority of the members of the GA in order to be elected. This is different from the original proposal of the-then UN Secretary-General Kofi Annan in his report ‘In Larger Freedom,’ who proposed the creation of:

Second, and as expected, Ambassador Haley called for ‘the Council’s agenda item 7 [to] be removed.’ ‘This, of course, is the scandalous provision that singles out Israel for automatic criticism. There is no legitimate human rights reason for this agenda item to exist. It is the central flaw that turns the Human Rights Council from an organization that can be a force for universal good, into an organization that is overwhelmed by a political agenda.’

On this point, while her arguments were powerful – i.e. that ‘getting rid of item 7 would not give Israel preferential treatment, claims against Israel could still be brought under item 4, just as claims can be brought there against any other country; rather, removal of item 7 would put all countries on equal footing’ – Ambassador Haley did not offer any ideas on how she could achieve such a change in practice.

In fact, to remove item 7, the Council would need to pass a resolution amending its ‘institution-building package.’ This would then need to be endorsed by the General Assembly. While this is possible in principle, the risk is that any such ‘re-opening’ would offer other countries a chance to insert their own amendments, which might – for example – seek to also delete item 4 (situations that require the Council’s attention) or abolish all country-specific Special Procedures mandates. The key question is: is the US (together with its friends) ready to take that risk?

In closing, Ambassador Haley made clear that ‘these changes are the minimum necessary to resuscitate the Council as a respected advocate of universal human rights.’

Crucially, she also suggested that the US was ready to take the lead in pushing these reforms (i.e. as opposed to merely calling on other States to do so). ‘For our part,’ she said, ‘the United States will not sit quietly while this body, supposedly dedicated to human rights, continues to damage the cause of human rights…I call on all likeminded countries to join us in making the Human Rights Council reach its intended purpose.’