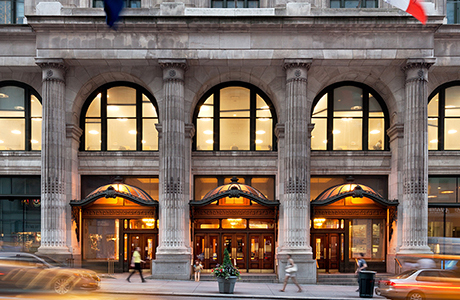 The new office is headed by Danica Damplo (US). Prior to joining URG, Danica worked as a Research Officer supporting the mandate of the UN Special Rapporteur on truth, justice, reparation and guarantees of non-recurrence. Before that, she worked with several NGOs, including Independent Diplomat, a diplomatic advisory non-profit in New York.

URG NYC’s offices are based in the Ralph Bunche Institute (RBI) at the Graduate Center of the City University of New York (CUNY). This is part of a wider partnership with RBI, which will see the two organizations applying for and implementing joint projects in the field of human rights and international relations, and organizing joint events with academics and UN policymakers. The agreement will also see URG publishing articles by CUNY-based academics, and taking on CUNY graduate and post-graduate students as interns and research fellows.

“URG has been working for the past year to establish a permanent and sustainable presence in New York. This is in recognition of the city’s crucial importance – as the home of UN headquarters – to the international human rights system and to multilateral diplomacy in general.

URG has in fact already been active in New York, organizing regular events and dialogues on issues including: Human Rights Council reform; Council membership and elections; and the relationship between the Council and the Third Committee. The establishment of a permanent office will allow us to significantly increase this level of activity, and will also help us to develop products and analyses tailored for a UN New York audience.

We are delighted that the new office will be led by Danica Damplo, who has worked on UN human rights issues in New York for a number of years.