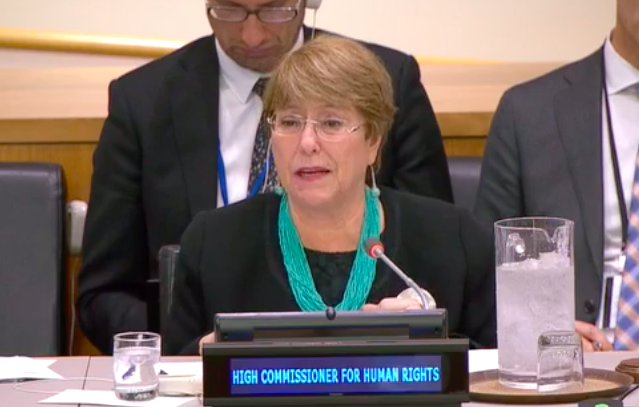 On March 11th, at UN headquarters in New York City, High Commissioner Michelle Bachelet gave her first address to the Security Council in her capacity as High Commissioner for Human Rights. She spoke at an Arria-Formula meeting, on the topic of “human rights, accountability, and justice: contributions to international peace and security” (watch it here). The High Commissioner briefed the Security Council alongside two other speakers: Miguel de Serpa Soares, Under-Secretary-General for Legal Affairs, and Theodor Meron, former President of the International Criminal Tribunal for the former Yugoslavia (ICTY) and of the International Residual Mechanism for Criminal Tribunals (IRMCT).

The concept note for the event detailed the Security Council’s past use of accountability mechanisms and justice initiatives, the recognition among States that serious human rights violations threaten peace and security, and the integration of human rights-related work at the Security Council. It stipulated that the meeting would be an opportunity for Member States to discuss how the promotion of human rights, prevention of serious violations, and pursuit of justice are critical for the Security Council’s mandate of maintaining international peace and security. The concept note emphasized that this is also essential for the realization of both Agenda 2030 for Sustainable Development and the Secretary General’s prevention agenda, while recognizing the intrinsic nature of UN human rights work in this endeavour, noting that “in this regard, the High Commissioner for Human Rights and her office play a significant role.”

The event was co-hosted by two Security Council Member States, Peru, and France. The representative of France noted that respect for human rights and the prevention and resolution of conflict are two sides of the same coin, calling for regular interaction of the Security Council with all mechanisms to protect human rights.

In her statement to the Security Council, High Commissioner Bachelet stated that sustaining peace and fostering reconciliation following large scale violations requires upholding justice to break cycles of violence and impunity because when “perpetrators are emboldened, and victims silenced, grievances will breed until they erupt in renewed violence.” The High Commissioner spoke in depth on transitional justice processes in her own country of Chile, and in neighboring countries, noting that “processes of justice and of truth, with willingness to patiently and diligently identify and confront root causes and provide for reparation, are equally important.” She commended governments who had the political will “to commit to, and stat the course” to deliver “long term benefits, despite short term political costs.”

High Commissioner Bachelet also highlighted the work of the Office of the High Commissioner for Human Rights (OHCHR) in supporting States through complex transitions to “re-establish the ordinary links of life in a shared space.” She also noted the indispensable work of civil society and the role of national consultations in transitional justice efforts. She linked the reclamation of human rights and rule of law as essential to the Security Council’s work on conflict resolution and prevention: “Human rights measures bind people together. Slowly, but steadily, they shape societies with a sense of shared institutions, founded on the impartial rule of law, and a shared future. I firmly believe these principles to be central to the Council’s ability to realise its peace and security mandate. And I look forward to engaging with the Council, and its members, on these issues of common interest in the coming years.”

All three speakers highlighted the contributions the Security Council has made to international criminal law and accountability; establishing the International Criminal Tribunals of Yugoslavia and Rwanda, referring cases to the International Criminal Court, issuing individual sanctions, deploying fact-finding missions, supporting regional, national and hybrid accountability mechanisms, and endowing peacekeeping missions with human rights and rule of law components. They encouraged the Security Council to ensure accountability for serious violations, while also considering the full breadth of transitional justice mechanisms called for by victims, that go beyond, but do not exclude, criminal proceedings. The speakers recommended improving coordination between UN institutions and mechanisms, collaboration with regional institutions, and the need for international community to financially and politically support existing justice mechanisms. Speaker Theodor Meron noted that “we cannot have enduring sustainable peace without justice, and we cannot have justice without human rights,” and while “accountability is vital we must not lose sight of larger goal that violations should not occur in the first place.”

In the ensuing interactive dialogue, several Member States remarked positively on efforts toward comprehensive transitional justice, including cases where the Security Council and UN human rights mechanisms have made a positive contribution. Switzerland for example, pointed positively to the increased attention given to transitional justice at OHCHR NYC.

In her statement during the interactive dialogue, High Commissioner Bachelet stated that prevention is not only about early warning, it’s about early action. She reminded Member States that the UN human rights apparatus possesses a plethora of tools essential for the prevention of human rights violations and conflict and that her office and OHCHR stand ready to assist the Security Council in its mandate.