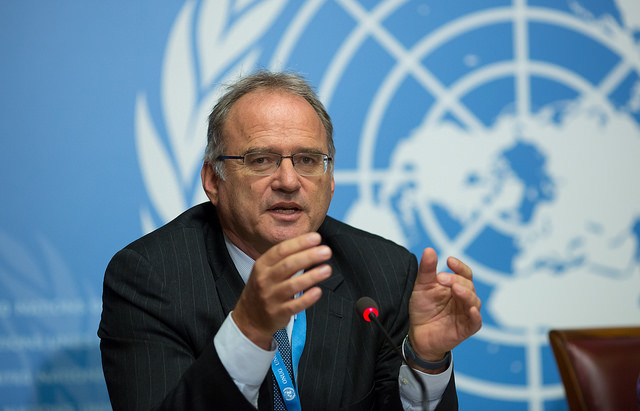 The Universal Rights Group (URG) is pleased to welcome Professor Christof Heyns, UN Special Rapporteur on extrajudicial, summary or arbitrary executions, to its Board of Trustees.

Commenting on his appointment, Professor Heyns said: “I am very happy to join the URG Board. I am a solid supporter of the URG approach: they facilitate important discussions, conduct relevant and credible research (often with a welcome historical perspective); and offer practical policy options, with the potential to increase the relevance of the international human rights system.”

Heyns was appointed as UN Special Rapporteur on extrajudicial, summary or arbitrary executions in August 2010, and is one of three independent experts currently conducting the United Nations Independent Investigation on Burundi (UNIIB), mandated by Council resolution S-24.

He is Professor of Human Rights Law and Director of the Institute for International and Comparative Law in Africa at the University of Pretoria. He has advised a number of international, regional and national entities on human rights issues. He also teaches human rights law at Oxford, and at American University, Washington DC. He has been a Humboldt Fellow in Heidelberg, Germany, and a Fulbright Fellow at Harvard Law School.

The URG Board of Trustees sets the overall strategic direction of the organisation and guarantees its independence and integrity. It is made up of eminent experts from the world of human rights, including current and former Special Procedure mandate-holders, current and former members of treaty bodies, former foreign ministers, international judges, heads of human rights NGOs and leading academics.