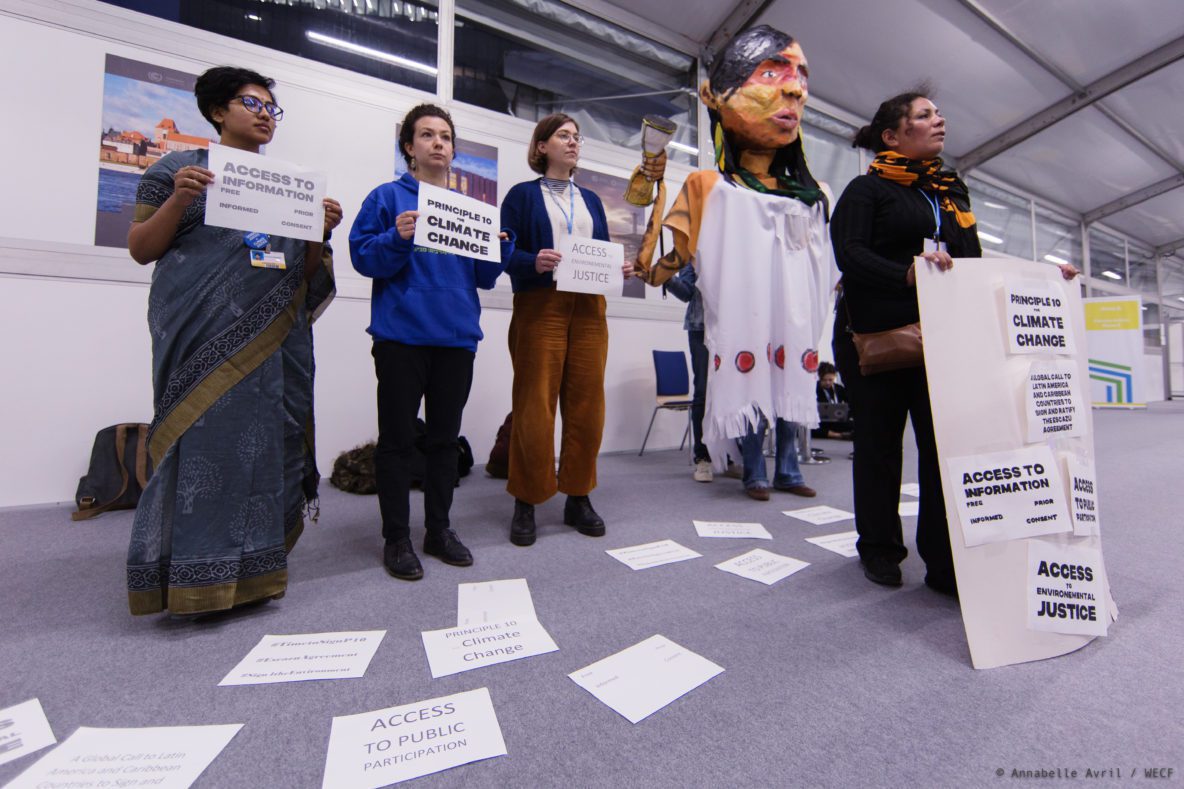 The international community eagerly awaits the Escazú Agreement to come into force in early 2021 after having secured 12 ratifications (one more than the minimum required – 11). The Escazú Agreement, which emerged from the 2012 United Nations Conference on Sustainable Development (Rio+20), is the first legally binding instrument in the world to include provisions on environmental human rights defenders (EHRDs) and is also the first environmental agreement adopted in Latin America and the Caribbean. Significantly, one of its main provisions includes recognising the right of present and future generations to live in a healthy environment. At a high-level event organised by the Economic Commission for Latin America and the Caribbean (ECLAC), the United Nations High Commissioner for Human Rights, Michelle Bachelet, stated: ‘the Escazú Agreement comes at a very opportune time because we can make a real commitment to change. It provides a cornerstone for environmental democracy, international cooperation and multilateralism and that must be at the centre of efforts to build back better using a human rights-based approach.’ Considering the high number of EHRDs killed as well as the ongoing climate crisis, the coming into force of the Escazú Agreement represents a momentous step toward protecting and promoting human rights in the region.

The UN Special Rapporteur on the situation of human rights defenders has defined EHRDs as ‘individuals and groups who, in their personal or professional capacity and in a peaceful manner, strive to protect and promote human rights relating to the environment, including water, air, land, flora and fauna.’ They are often local residents or indigenous people confronted with an increasing local population, the emergence of construction projects, or activities associated with extractive industries. EHRDs, who often reside near ecologically important areas, play a crucial role in protecting these areas and therefore make significant contributions toward reaching global climate and sustainable development goals.

However, EHRDs often work at great personal risk and are often criminalised for their activities. They experience a particularly high degree of danger in Latin America and the Caribbean, which represents one of the most biodiverse regions in the world and includes 60% of global terrestrial life. According to a 2019 Global Witness report, ‘84 of the 167 environmental defenders killed [in 2018] were from Latin America.’

Indeed, murders, intimidation, and attacks against EHRDs have become increasingly common as these crimes are often not properly investigated and perpetrators fail to be brought to justice. Even the case of Berta Cáceres, which has been symbolic to EHRDs in Latin America, remains one marked by impunity.

What is the Escazú Agreement?

The Regional Agreement on Access to Information, Public Participation and Justice in Environmental Matters, also known as the Escazú Agreement, is the first regional environmental human rights treaty in Latin America and the Caribbean. It was negotiated and approved in Escazú, Costa Rica in 2018, with civil society as well as human rights and environmental experts participating in this process and thus playing an essential role in the treaty’s adoption.

According to a Global Witness report, the most dangerous countries for environmental defenders are Colombia, Brazil, Mexico, Guatemala, and Honduras. Of these countries, only Mexico has ratified the agreement. Other dangerous States for EHRDs that have yet to ratify the agreement are Peru and Paraguay. Although Costa Rica and Chile (jointly with Colombia) were once the flag-bearers of the agreement and played a key role in its negotiations, they too have failed to ratify it thus far.

Meanwhile, the region continues to be the most dangerous for EHRDS. For instance, in 2019 Colombia had the highest number of the world’s EHRDs reportedly killed in recent history. One important reason is ‘the social stigmatisation of defenders, often orchestrated by government officials (including local public officials), law enforcement agents, corrupt businessmen and members of illegal armed groups, who regularly label them as “guerrilleros,” “anti-development extremists,” or “drug dealers.”’

Other factors that impact the high number of EHRDs killed include a lack of effective mechanisms to access justice and prevalent impunity, disregard for the rights of EHRDs, including their rights to participation and previous consultation, and a lack of transparency in the decision-making and implementation processes of projects that, directly or indirectly, affect the environment.

The Escazú agreement aims to solve these issues by guaranteeing the full enjoyment of the rights to access information and justice in environmental matters, as well as by facilitating public participation in environmental decision-making processes.

With regard to the agreement’s implementation, the Vice President of Costa Rica explained:

‘In Latin America, we have suffered tremendous attacks on environmental defenders, including indigenous people, rural leaders, activists from environmental organizations, leaders of Afro-descendent organizations, which in some cases have ended in death. Having a legal tool that protects them indicates that our region is not only committed to the environment but also protects environmental activists’ lives and rights. This is a fundamental step forward.’

Why is it so important?

The Escazú Agreement is a landmark multilateral instrument that provides a common framework on environmental matters and can be used to safeguard the human rights of vulnerable groups and individuals, including EHRDs. Furthermore, the agreement represents a milestone in international environmental law because, in the words of the Executive Secretary of ECLAC, Alicia Bárcena, it ‘aims to reach the most vulnerable, marginalized and excluded sectors through affirmative measures, and it aspires to remove the barriers that impede or hinder the full exercise of [environmental human] rights.’

Furthermore, the agreement indicates that States must provide adequate knowledge and assistance to the public, including vulnerable communities, to help them effectively exercise the rights specified in the agreement.  At its core, the treaty seeks to ensure equality and non-discrimination as well as oblige states to guarantee the human right to a healthy environment while promoting sustainable development.

Ultimately, the Escazú agreement offers hope in the face of increasing intimidation, harassment, and murders of EHRDs in the region. Its ratification by 12 States demonstrates that these countries have realised the urgency of this issue and are prepared to pursue efforts to protect the rights of EHRDs. Meanwhile, at the international level, this treaty provides an example for other states to follow. As stated by the UN Special Rapporteur on toxics and human rights, Marcos Orellana:  ‘It provides citizens and communities with the tools needed to hold States accountable for protecting and fulfilling the fundamental right to a healthy environment.’

Although the Escazú agreement marks a historic step in safeguarding the human rights of EHRDs, to date the treaty has only been ratified by 12 countries in the Latin America and Caribbean region. As such, further ratification is needed for the agreement to effectively serve as a widely accepted multilateral instrument. At the same time, while the agreement provides a strong basis for strengthening environmental democracy and upholding human rights across the region, its impact will ultimately depend on its proper implementation in each concerned State.