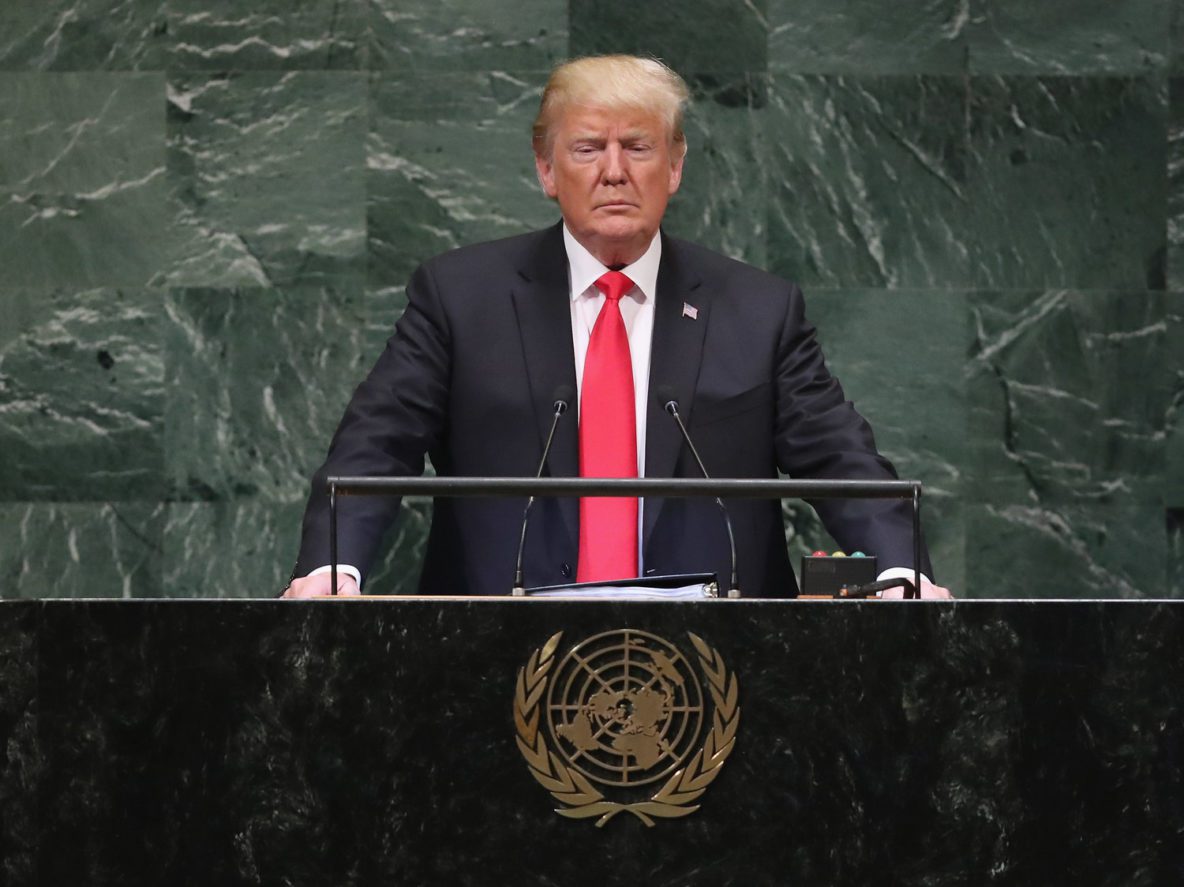 Over the past four years, the Trump Administration has slowly abdicated its role as a leader in multilateralism and as one of the top promoters of human rights at the UN specifically. At this year’s UN General Assembly (UNGA), President Donald Trump touted a narrow view of human rights, citing priorities of “religious liberty, opportunity for women, the decriminalization of homosexuality, combatting human trafficking, and protecting unborn children.” Furthermore, instead of championing UN human rights mechanisms, the administration has withdrawn from the Human Rights Council, dramatically cut funding to the Office of the High Commissioner for Human Rights, and even attacked human rights mechanisms ranging from the International Criminal Court to UN independent experts.

Not only do these actions damage the United States’ image as a liberal democratic leader, they also harm decades-long alliances with other human rights-promoting nations. The upcoming election in the US only gains in importance as the candidates stake out starkly different positions on multilateralism and human rights. The winning candidate and next US administration must prioritize investment in multilateralism and alliances in order to reassert the United States’ position as a protector and promoter of human rights, and by extension, a global liberal democratic leader and linchpin of the international order. Only though partnership and multilateral cooperation can the US successfully provide a counterweight to growing authoritarianism and human rights abuses around the world.

A referendum on rights

The Trump Administration has showed no indication of slowing or reversing these harmful actions at the UN. In fact, recent developments would suggest that these trends are accelerating: the administration has continued American disengagement and isolationism at the UN by withdrawing from multilateral institutions such as the World Health Organization, and promoting a selective and regressive view of human rights at the UN through the report of the State Department’s new Commission on Unalienable Rights.  On the other hand, Democratic nominee Joe Biden has pledged to rebuild American support for international institutions and reform UN human rights mechanisms through rejoining the Human Rights Council so that, “America once again stands for human rights.”

Ultimately, the American people will decide what type of engagement they want to see at the UN. Recent polls reveal that multilateralism is already a clear priority for the American people: a vast majority of Americans support redoubled commitment at the UN, in fact, 85% of voters say that it is important for the US to maintain an active role at the UN. Furthermore, there is overwhelming support for engagement on human rights specifically: in the largest survey ever undertaken by the UN for its 75th anniversary, respondents in North America listed respect for human rights as the second most important priority for the world, second only to environmental protection.

Re-engaging with the UN’s human rights mechanisms would provide multiple opportunities for the US to strengthen multilateralism and champion human rights, domestically and internationally. The Universal Periodic Review (UPR), for example, is one of the most broadly supported mechanisms of the UN and allows for an in-depth review and recommendation process on human rights in each UN member state, including feedback from civil society organizations. With the US review coming up on November 9th, the next administration should use this opportunity to consider tangible recommendations to address domestic human rights challenges as well as promote the UPR as a method to improve human rights globally.

As one of the three core pillars of the UN, human rights is not only a cross-cutting issue to almost all of the work that the UN does, but it is also a powerful tool to counter growing authoritarianism. UN human rights mechanisms such as treaty bodies, investigative mechanisms of the Human Rights Council, and UN independent experts help monitor human rights abuses in every UN member state, including some of the world’s most repressive regimes, and provide recommendations to improve human rights in-country.

Together, these mechanisms provide avenues to help states advance the many areas of human rights that the US has traditionally championed, such as democracy, women’s rights, and religious freedom, while also staving off further violations and a slip into authoritarianism. These tools also allow member states to “name and shame” authoritarian regimes for human rights abuses and draw attention and action in these areas. Working via these mechanisms not only provides clear avenues to make consensus-based progress on human rights, but also strengthens the effectiveness and legitimacy of the multilateral system while doing so.

Moreover, the next administration must first walk the talk by rebuilding our foreign service and diplomatic corps with the necessary resources and personnel, as well as the foreign policy prioritization befitting diplomacy’s role in maintaining global peace and security. As former Secretary of Defense James Mattis stated, “If you don’t fund the State Department fully, then I need to buy more ammunition ultimately.” Only with a strong domestic reinvestment in multilateralism can the next administration begin to rebuild its reputation as a global liberal democratic leader.

Furthermore, the US does not have to go it alone when working to protect and promote human rights through multilateral institutions. The next administration should call on old friends who have continued to carry the torch of multilateralism in the United States’ absence in order to double down on human rights priorities.

Over the past four years, as the Trump Administration has set out to implement its “America First” agenda at the UN through attacks against the UN human rights system and de-prioritization of international cooperation as a whole, US allies have begun to fill the void. In an attempt to reignite an appetite for international engagement, the governments of France and Germany launched the Alliance for Multilateralism in 2019 which seeks to bring together countries who are committed to the rules-based multilateral order and preserve international norms and institutions in peril. The Alliance has created coalitions for action on a number of human rights issues including gender equality, information and democracy, and international humanitarian law.

Re-engaging with our allies will certainly not be easy, especially when the share of the public in many of these allied countries with a favorable view towards the US is at an all time low. However, despite the actions of the current administration, the US still holds considerable sway in the international community as the largest funder of the UN and as a security partner to the EU through NATO. Therefore, scorned allies will nevertheless have a keen eye towards the next administration’s priorities at the UN and on multilateralism more broadly.

Furthermore, domestic pressure to reinvigorate our alliances continues to be strong, with seven in ten Americans believing that it is better for the US to work with allies and through international organizations than act mainly on our own.

Recent polls have shown that a majority of Americans support reinvigorating alliances and recommitting to the UN and human rights. The next administration should heed this call from the American people and recommit to multilateralism while prioritizing human rights as an area to advance mutual values and goals with likeminded partners.

Ultimately, only through reinvesting in multilateralism at home, at the UN, and with our allies, can the United States regain its position as a global leader and trusted ally on human rights protection and promotion. In less than a month’s time, the next US election will provide a fresh opportunity for the United States to heed the call of the UN Secretary-General: “Our future rests on solidarity. We must repair broken trust. We must reinvigorate our multilateral project. And we must uphold dignity for one and for all.”