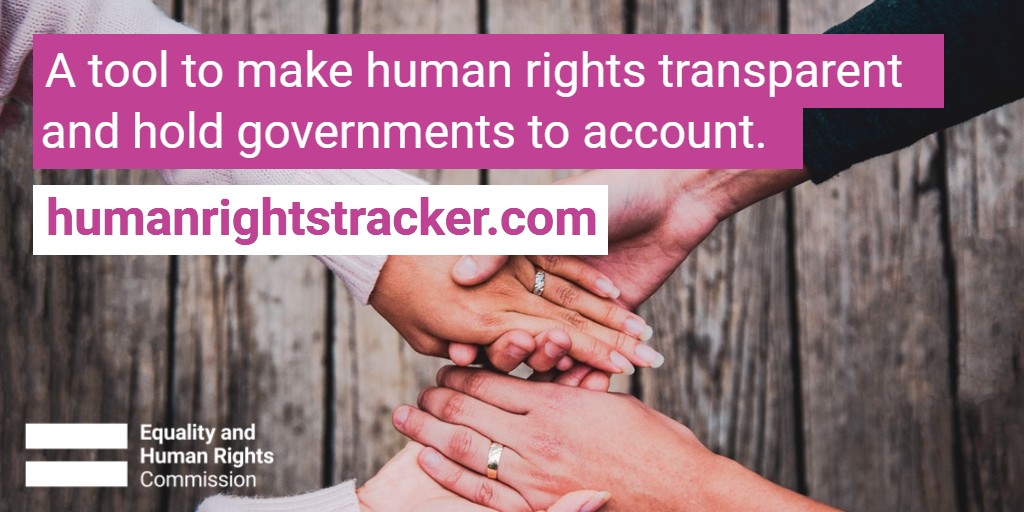 As Britain faces a future of ever faster and deeper change, it is more important than ever that its human rights record and related compliance with its international human rights obligations and commitments is completely transparent, so that the State can be held to account and we can see where improvements might be made.

That’s why the Equality and Human Rights Commission (Great Britain’s NHRI) has built HumanRightsTracker.com,a searchable online tool where anyone can learn more about human rights in Britain. Despite the fact that the UK Government has been signed up to various UN human rights treaties for decades, too few people are aware of their rights in international law and, in many cases, governments are failing to fulfil them.

The journey of creating our Tracker began in 2016 at a human rights conference in Belfast. We left inspired and energised by a presentation by the New Zealand Human Rights Commission, who were the first national human rights institution to create an online tool of this kind. We knew that a similar tool in the UK could be transformational, both for our work and that of our partners across the country.

First and foremost, the Tracker is a vital tool for building peoples’ capacity and understanding in relation to the international human rights framework. We know that one of the hardest things about engaging with this complex system is navigating the disparate and varied strands of information relating to each process.

The website provides information on each of the UN human rights treaties the UK is party to, as well as the Universal Periodic Review (UPR), including a short explainer, key deadlines, links to all published reports and guides for how to participate. This one stop shop will be used as a platform for training a range of relevant stakeholders, from government officials and parliamentary staff to civil society organisations and legal professionals.

It’s also a vital transparency tool. The Tracker provides a searchable database of every recommendation the UN has made to the UK in the last round of treaty body reviews and the UPR. This amounts to nearly 500 recommendations, which can be filtered and searched by topic, UN body, population group and related Sustainable Development Goal. We hope this will shine a light on what for many people can seem a confusing and opaque set of standards, processes and outcomes.

For those who are already engaged with UN reviews of the UK’s human rights record, we hope it also helps facilitate working across the different mechanisms. Women’s rights organisations who participated in the recent CEDAW examination have a brilliant opportunity to also influence the forthcoming civil and political rights review, or socio-economic rights campaigners can find out about what’s happening in relation to child rights, taking us all out of our usual siloes.

Our ultimate goal and responsibility as a national human rights institution, is to hold the UK and Welsh governments to account for the obligations the UK has signed up to under international law. In the next stage of the Tracker’s development we will take sub-groups of recommendations, such as on inclusive education or violence against women and girls, and map against them what laws and policies the UK and Welsh governments have in place to implement them. Critically, we will also provide our assessment of whether that Government action is sufficient, and monitor any progress made.

Much is made of the ‘proliferation’ of UN human rights recommendations, but the Tracker demonstrates that with the right coding behind you, these can quickly be collated into a much more manageable plan of action.

We believe this will prove a valuable and comprehensive source of information on the strengths and weaknesses of Government compliance with international human rights standards, and we hope this will spur further government action.

Despite the clear links and overlap between the various UN recommendations made, there is little evidence that the UK Government is taking a coordinated, cross-government approach to their implementation.

Following the UK’s UPR in 2017, the UN High Commissioner for Human Rights recommended that the UK establish a National Mechanism for Implementation, Reporting and Follow-up (NMIRF). Such a body would ensure a coordinated, effective approach to reporting to, and engaging with, human rights reviews, and provide a stronger accountability mechanism for overseeing the implementation of the UK’s human rights obligations. This call has been echoed by UN Treaty Bodies, as well as UK and Scottish parliamentary committees.

The Office of the High Commissioner for Human Rights’ global study into the creation of national mechanisms identified a wide range of innovative approaches by countries across the world.  While there is no ‘one size fits all’ approach, the study identified a number of common outcomes: enhancing the sustainability of domestic expertise and structures, supporting an inclusive and participatory dialogue across diverse actors and strengthening the scrutiny of legislation and policy.

There are also clear links between the international human rights framework and the Sustainable Development Goals (SDGs). Though all UK Government departments are now expected to link their work to the SDGs in their single departmental plans and report on progress on these plans to the Cabinet Office, no such coordination or link has been made in relation to the international human rights framework.

If the UK is to retain a reputation as a leader in human rights at the international level – particularly given plans to seek re-election to the UN Human Rights Council next year – it must establish a national mechanism as an urgent priority. The Welsh Government, too, can pave the way by establishing a similar mechanism in relation to those human rights obligations under their remit.

Going forward, we plan to set out a positive vision for what best practice from government would look like in relation to a NMIRF. In the meantime, we are calling on all human rights actors – from civil society organisations to academics, parliamentarians and legal professionals – to use HumanRightsTracker.com to hold the UK and Welsh governments to account. Together, we need to harness the human rights framework and use this tool to improve people’s lives and make Britain a fairer place to live.

N.B. The EHRC’s remit for human rights covers England, Wales and those issues in Scotland that are reserved to the UK Parliament. In Scotland, the Scottish Human Rights Commission and others are developing a similar tool to show how the Scottish Government is taking forward the UN’s recommendations. The Northern Ireland Human Rights Commission (NIHRC) produces an annual statement on human rights in Northern Ireland.