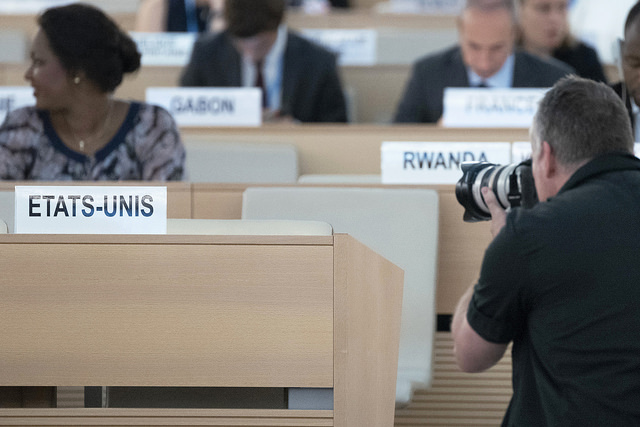 The US’s announcement that it is leaving the UN Human Rights Council should not surprise anyone, since the Trump administration has long made clear its disdain for many parts of the United Nations. But the damage that the decision is likely to cause could nonetheless topple an increasingly wobbly house of cards.

When the Human Rights Council was created in 2006, the US (then under the Bush administration) voted against its establishment and refused to stand for election to it, though it nonetheless provided the Council with significant funding and supported its work as the UN’s only intergovernmental human rights body. The US’s objections centred on the argument that the design of the Council did not do enough to address problems of politicisation, bias and the membership eligibility of well-known rights violators – problems that had dogged its predecessor. And those arguments have continued throughout the Council’s 12-year history.

Many countries and NGOs have criticised the Council’s bias against Israel, and the presence of grave human rights abusers (such as Burundi) as members of the Body. But even the Council’s harshest critics have generally recognised that to make effective changes, you have to be in the ring. The US’s decision to leave bucks that trend.

The Council has 47 members, elected for fixed terms, with seats distributed to ensure proportionate geographic representation. Because it is made up of States represented by diplomats tasked with protecting their national interests, it is an inherently political entity. Its remit is to promote, protect and develop human rights – but it only has “soft” powers, not legally binding ones. Instead, much of its work involves fact-finding, information-sharing, capacity-building, and technical assistance. On those fronts, it has often had great success, particularly in establishing international investigations into major violations worldwide.

But as would be expected with any political body – let alone one representing all nation States – the Council undeniably suffers from deep problems.

One of the most glaring and long-running issues is an excessive and disproportionate focus on Israel. There is no question that Israel commits human rights abuses in the Occupied Palestinian Territories, or that it is an occupying power in those territories. But since the Council’s creation, those human rights abuses have received more scrutiny than grotesque atrocities elsewhere.

Israel is the only country singled out for its own item on the Council’s permanent agenda, Agenda Item 7. There have been more Special Sessions convened on Israel than any other country, even Syria. And in total, Israel has received more of the council’s attention than the Democratic Republic of Congo (where millions of people have been killed or displaced in recent years), Darfur and Sri Lanka (where genocides were perpetrated), North Korea, and Yemen. And this is not just more than each of those countries – but more than all of them combined.

This disproportionate scrutiny undermines the Council’s credibility and diverts resources away from other areas that desperately require attention. But some countries have taken some steps to address the issue. The sessions convened around Agenda Item 7 are not well attended, with many States refusing to participate in the discussions about Israel at every Council Session. And pressure has been placed on the Organisation of Islamic States, a political bloc with 54 members, not to constantly raise Israel during discussions on all other regular agenda items.

Let’s be clear: even though there is disproportionate and excessive attention placed on Israel, the Council does focus on an awful lot of other grave and crisis situations. And that work is not overshadowed or cancelled out simply because of bias against Israel.

A second oft-cited criticism of the Council is that it allows well-known human rights abusers to take seats. But this is an intergovernmental body – and that means all States have the opportunity to stand for election. If elected by their peers, they have the right to be a member. There are “soft” membership criteria, and States make pledges and commitments during their campaigns – but, ultimately, it comes down to elections.

Some known rights abusers, notably Iran and Syria, previously withdrew their candidacies when it became clear that they wouldn’t be elected, while Libya’s membership was suspended in 2011 because of the serious human rights violations occurring there. But other violators have secured membership – most recently, Burundi was put forward by the African Group and elected to the Council despite its ongoing gross and systemic rights violations.

The Council is also used by some states to promote agendas that directly undermine human rights. Countries such as Cuba, Pakistan and Russia have been at the forefront of efforts to protect “the family” or “religious freedom” in order to justify state-sponsored violence and discrimination against ethnic, religious and sexual orientation minorities.

For these and other reasons, there have been some efforts to try to implement hard and soft reforms. The Trump administration initially made that reform agenda central to its engagement with the Council – in recent weeks it floated a draft resolution on reforms and sought allies to co-sponsor it. But while many countries and NGOs agreed with the substance of the proposal, it was strongly and publicly opposed by several organisations, among them Amnesty International, Human Rights Watch and the International Service for Human Rights.

Those NGOs wrote to 60 States setting out concerns that opening a formal reform process would likely backfire, with States hostile to human rights using that process to undermine rather than strengthen the Human Rights Council. Their intervention seems to have been the final straw for the US. But although the Trump administration has long made it clear that human rights and multilateralism are not its priorities, this move will have a major impact. Even America’s closest allies on the Council have expressed their disappointment at this decision.

The Council is the world’s main human rights body – and it is crucial that all States engage with its work. The US has long been a leader on human rights, particularly through its work and support for the UN’s Geneva-based human rights mechanisms. By abandoning ship, the US has made it that much harder for like-minded States to protect and promote human rights. And it has set a dangerous and worrying precedent that other countries, particularly those who commit grave violations, may emulate.

Dr. Rosa Freedman is Professor of Law, Conflict and Global Development at the University of Reading.
Featured photo: A photographer taking a photo of the plate of the United States of America at the 38th Regular Session of the Human Rights Council. 20 June 2018. UN Photo / Jean-Marc Ferré, licensed under CC BY-NC-ND 2.0.
This article first appeared on The Conversation, and has been reproduced with the author’s kind permission.