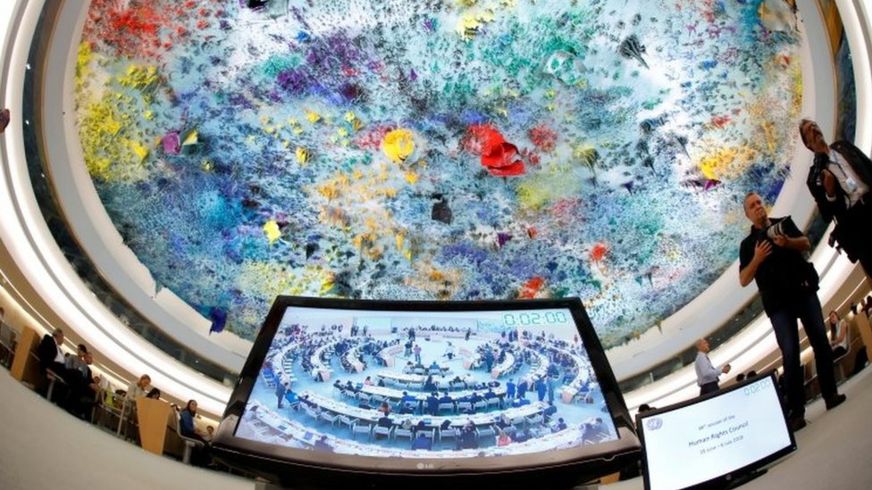 With a Presidential election less than 100 days away, over 150,000 American deaths from COVID-19, and a GDP freefall comparable to the Great Depression, the focus of the American voter is very much on domestic, rather than foreign, policy. Yet, a recent draft State Department report contains worrying implications about the human rights foreign (and domestic) policy of a second term Donald Trump presidency, indicating further isolationism and dismissal of international human rights frameworks. This stands in stark contrast to available information about the platform of Trump’s opponent, former Vice President Joe Biden, adding more weight to an already critical election.

The Trump administration’s foreign policy approach has been marked by withdrawal from international agreements, obligations and organisations, as part of Trump’s ‘America first’ isolationist and transactional approach to international diplomacy. Given the recent withdrawal of the US from the World Health Organization (WHO) amidst a global pandemic, there is no indication of an intended reversal of this approach.

On 16 July, the State Department Commission on Unalienable Rights, created by Secretary of State Mike Pompeo last July to provide a new view for the State Department on human rights based on the ‘nation’s founding principles’ and the 1948 Universal Declaration of Human Rights, released its first draft report.

The Commission’s report has elicited strong criticism from experts and practitioners. In fact, more than two hundred human rights, social justice and faith-based organisations and experts have signed a letter as an official comment on and objection to the report. The letter indicates that the report could ‘undermine American commitments to human rights and provide cover for those who wish to narrow certain categories of rights protection.’

One criticism is of the report’s antiquated and skewed rendering of the international human rights system that ignores considerable progress, including the advancement driven by the US and global partners. This negative appraisal can be interpreted as justification for, as the report suggests, the US ‘maintaining a position of selective constructive engagement with international human rights institutions’, despite this approach contravening the nature of human rights obligations.

The report criticizes the Human Rights Council, from which the Trump administration officially withdrew the US in 2018, citing irreconcilable differences and failed reforms. It is worth noting that while many countries and NGOs have criticised the Council’s biases, and the presence of grave human rights abusers as members of the Body, even the Council’s harshest critics have generally recognised that to make effective changes, one has to actually be present.

The draft report also critiques “the widespread proliferation of non-legal standards — drawn up by commissions and committees, bodies of independent experts, NGOs, special rapporteurs, etc., with scant democratic oversight — gives rise to serious concerns.” In addition to the conspicuously negative reference to NGOs amidst a global shrinking of civic space, the critique of Special Procedures follows a long period of radio silence from the Trump administration in response to requests for visits by UN Special Procedures covering different thematic human rights issues. Following the visit and report by the Special Rapporteur on extreme poverty and human rights Philip G Alston in 2018, who castigated the Trump Administration for policies that he claimed exacerbate inequality and extreme poverty in the United States, his report was strongly condemned by US officials who called the report political and its figures exaggerated.

The Commission’s report challenges the universal and non-hierarchical nature of human rights. It recognises that according to the Universal Declaration, human rights are ‘universal, indivisible and interdependent and interrelated,’ and yet proceeds to make a case for the prioritisation of religious freedom and property rights, and bases this on American traditions and interpretations. This draft report also asserts that States should have latitude to make their own decisions with regards to human rights, within the limits set by the Universal Declaration. This challenges the idea that human rights are universal and interconnected and should not be unevenly enforced based on the platform or caprice of the political party or leader in authority.

The Commission’s draft report disturbingly refers to abortion, affirmative action and same sex marriage as ‘divisive social and political controversies’ despite all three being guaranteed by the US Supreme Court and domestic laws, while international human rights law clearly recognises LGBTQI+ rights and sexual and reproductive rights. This follows efforts by the Trump administration to reverse gains in both these areas, on the domestic and international stage.

As this is an election, there is of course another candidate and another direction the US could take, and while there is not an equivalent report to that of the Commission, the Biden campaign and the Democratic party have directly commented on some of the key issues addressed above.

Former Vice President Biden has pledged to seek a return for the US to the global stage and to ‘rebuild American diplomatic capacity to support and defend human rights around the globe, including through international institutions.’ For many, as former President Barack Obama’s Vice President, Biden will usher in a return to similar policies. It was the Obama Presidency that led to the US serving on the Human Rights Council after the George W. Bush Administration had previously voted against its establishment in 2006 and had refused to stand for election to it.

The draft Democratic Party Platform (as of July 21) similarly pledges that a Democrat President would ‘re-join and reform the WHO, the United Nations Human Rights Council, and the United Nations Population Fund… We will work to modernize international institutions to make sure they are fit for purpose in the 21st century and responsible stewards of both public funds and the world’s trust.’  Biden has also explicitly pledged to re-join the UN Human Rights Council and ‘work to ensure that body truly lives up to its values.’

The pledge to return is matched with a promise to reform the international institutions, reform being an aspiration that predates Trump (and is not exclusive to the US). The Democratic Party Platform is subject to change and does not fully clarify what the reform or modernization of these bodies would entail, only a recognition that engagement it is critical to US interests and the promotion of universal human rights.

The Democratic platform also includes pledges to protect sexual and reproductive health and rights as well as LGBTQI+ rights, and on the issue of religious freedom, explicitly pledged to ‘reverse the Trump Administration’s politicization of religious freedom in American foreign policy.’ In response to the Commission’s report, Vice President Biden tweeted that:

‘As President, I will see to it that America once again stands for human rights. That doesn’t mean rights only for some, but rights for all – each and every American, and every person, everywhere, no exceptions.’

As the Commission’s report is a draft, and the Commission has promised to accept and incorporate feedback, it is possible that a report less incongruous with domestic and international human rights frameworks will be released. However, given that the panel was intentionally staffed with members who publicly hold views against abortion and marriage equality, and that, as mentioned above, many of the report’s key points align with the objectives of the present Administration, this does not seem likely.

While human rights is unlikely to receive much attention during this election cycle, the Commission’s report illustrates a stark contrast between the Trump and Biden approaches to human rights and international engagement.

This draft report not only indicates a continuation of the Trump administration’s pick-and-mix policy toward international organisations, but the potential use of this Commission to provide conceptual shielding for a foreign and domestic approach to human rights that risks isolating the US globally, from both scrutiny as well as progress, and that would privilege certain rights at the expense of others.