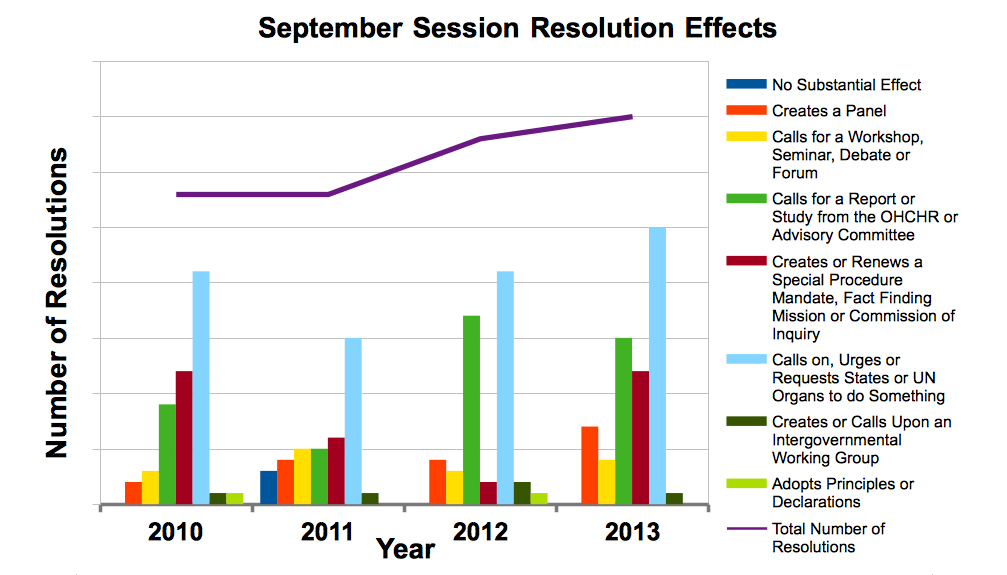 United Nations resolutions, short documents designed to present the will of the international community, are a basic building block of the work of the human rights system. Each session of the Human Rights Council ends with state diplomats voting on a raft of new resolutions covering a variety of thematic or country-specific issues. In preparation for this moment, those same diplomats will have spent months drafting, negotiating and trying to secure consensus (i.e. adoption without a vote) for the resolutions. Each of those documents attempts to set down the position of the international community on a given issue of concern and then encourages, calls on, requests or urges states or other actors to do something about it.

Since its creation in 2006, the Council has become an increasingly efficient and prodigious ‘resolution machine’, churning out ever greater numbers of them every year. In 2006, the three regular and four special sessions of the Council produced 43 resolutions/decisions. Within eight years, this number had increased drastically to well over double the 2006 levels. The graph below shows the number of resolutions passed by the Council during its September session over the past four years, and gives a breakdown of their effects:

But has this quantitative explosion been matched by a qualitative improvement? Has the increase in the Council’s output resulted in improved coverage, improved human rights promotion, and better protection for victims? In short, do all these resolutions matter or is the Council something akin to the Queen of Hearts in Alice in Wonderland, whose commands were ignored by everyone?

Such questions are of course nothing new, nor are they unique to the Human Rights Council. Its predecessor, the Commission on Human Rights, also saw an increase in the number of resolutions over a period of years, while in the 1980s and early 1990s the General Assembly was seen by some as a machine for producing paper solutions to real problems.

But just because these questions are not new does not mean they are not worth asking again today. There is a general feeling among the international community in Geneva that the Council is gradually strengthening its performance and is becoming a real force in promoting and protecting human rights around the world. Yet it is important to analyse the basis of this assumption. Is the Council, through its resolutions, proving itself able to exert real and tangible influence on the on-the-ground realization of human rights? Do its words matter? Do its decisions affect behaviour?

The Universal Rights Group (URG) is currently working on a project to look at the proliferation of Council resolutions and their impact on the enjoyment of human rights. To complement our quantitative analysis, we are undertaking a survey of policy-makers, NGOs, human rights defenders, victims, and members of the general public to understand the actual impact of resolutions.

The URG kindly asks you to complete the surveys below. One is for members of the general public and one is for policy-makers and NGOs directly involved with the work of the Council. The surveys are available in English, French, Spanish and Arabic.

The results will be incorporated into a major new report on the Council and its resolutions to be published later this year; a report that will make recommendations designed to improve the real-world effectiveness of the international human rights system.

We thank you in advance for your collaboration.

(i) General survey for the public: