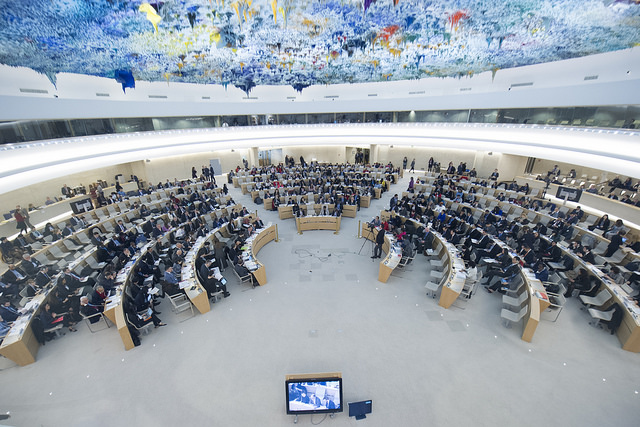 On 23 March 2018, the Human Rights Council concluded its 37th regular session, during which it addressed a wide range of human rights issues and heard 95 reports of human rights experts addressing 35 thematic and 50 country-specific situations. Among the 42 adopted resolutions, the Council adopted two complementary texts aimed at mainstreaming human rights in the implementation of the 2030 Agenda for Sustainable Development.

Reports on people of African descent, on the role of equity and inclusion in strengthening the right to education, on contemporary forms of slavery, and recommendations on the business and human rights dimension of sustainable development, all highlighted interlinkages with the Goals. Special Procedures have addressed the implementation of the SDGs in their thematic reports, issued open letters, participated in meetings, and raised matters related to the SDGs during country visits (see para. 40 of the report A/HRC/37/37). Moreover, establishing the link between human rights and the SDGs is one of the current strategic priorities of the Special Procedures mandate holders (see paras. 63 and 69 of the reportA/HRC/37/37). This priority is in line with the current trend relating to strengthening cooperation within the United Nations and enhancing cohesion between mandate holders. SDGs provide an excellent framework for such cooperation. In pursuing this priority, the mandate holders discussed interconnections between human rights, SDGs and resource mobilisation, in particular, the benefits of compiling recommendations, concluding observations, and general comments by Special Procedures and Treaty Bodies relevant to the implementation of SDGs (see report by the International Bar Association’s Human Rights Institute).

Finally, the resolution suggests relying on the standing agenda item 10 of the Human Rights Council to effectively assist States in implementing SDGs in a way that would be fully consistent with their international human rights obligations. This long-established mechanism of technical cooperation and capacity building includes a set of targeted measures aimed at helping States to remain faithful to their human rights obligations, particularly in times of armed conflicts or other crises.

In order to achieve closer coordination between human rights and the 2030 Agenda, the resolution mandates the Office of the High Commissioner for Human Rights (OHCHR) to organise two one-day intersessional meetings for dialogue and cooperation between States, the UN human rights mechanisms and other stakeholders. Importantly for a better coordination within the UN system, such meetings should interact substantively with the annual themes of the UN High-level Political Forum on Sustainable Development (HLPF) and should provide a summary report of the discussions that the HLPF can use in its activities. The first resolution, therefore, has a practical focus and an agreed method of work.

The second resolution entitled, ‘The need for an integrated approach to the implementation of the 2030 Agenda for Sustainable Development for the full realization of human rights, focusing holistically on the means of implementation’ (A/HRC/RES/37/25),* was tabled by South Africa and supported by 22 States. This resolution has a clear focus on the right to development, despite the lack of universal recognition of this human right. The resolution recalls the UNGA Declaration on the Right to Development, which recognises that States have “the right and the duty” to introduce development policies aimed at fair distribution of the benefits resulting therefrom.

In a similar manner to the first resolution, this text establishes a strong connection between development goals and human rights, with a special focus on gender equality and the empowerment of women and girls. In this context, and also recalling that all goals and targets of the Agenda 2030 are universal, indivisible and interlinked, the resolution expressly reaffirms that the 2030 Agenda ‘is grounded in and seeks to realize human rights and fundamental freedoms for all’. This interpretation has been confirmed by various stakeholders (see, for example,OHCHR and the Danish Institute for Human Rights). As a practical follow-up, the resolution invites the President of the Economic and Social Council (ECOSOC) to brief the Human Rights Council on an annual basis on the work of the HLPF and on the implementation of the 2030 Agenda in an integrated and holistic manner.

Taken together, the two resolutions contribute to strengthening of the normative framework that establishes mutual connection between human rights and development, in particular the 2030 Agenda. Apart from these two resolutions specifically aimed at mainstreaming human rights in the implementation of SDGs, a large majority of thematic resolutions adopted at the 37th session of the Human Rights Council, just as in previous years, contain a reference to the SDGs and aim at implementing a specific goal or target. For example, the resolution on promoting human rights and the SDGs through transparent, accountable and efficient public services delivery (37/7)* refers to Goal 16, which “encourages Member States to promote peaceful and inclusive societies for sustainable development, provide access to justice for all and build effective, accountable and inclusive institutions at all levels”. Resolution on the right to food (37/10)* refers to Goal 2 and other food and nutrition-related targets on “ending hunger, achieving food security and improved nutrition and promoting sustainable agriculture and on ending poverty in all its forms everywhere”. The resolution on adequate housing as a component of the right to an adequate standard of living (37/4)* specifically mentions Goals 1 and 11 and highlights the importance of making cities and human settlements inclusive, safe, resilient and sustainable. It calls upon States to implement the 2030 Agenda for Sustainable Development, including target 11.1 on access for all to adequate, safe and affordable housing and basic services.

Such interpenetration is a clear sign that implementation of the SDGs has been accorded a very high place on the current political agenda, and the States, as drafters and sponsors of resolutions, take their obligations relating to human rights and development seriously.

* The final text of the resolution has not been officially published yet. The current link leads to the draft text as adopted and will be replaced in due course. There may be minor editorial changes in the final official text.

Dr. Maria Smirnova is a researcher at the University of Manchester.

This article first appeared on ISSD SDG Knowledge Hub, and has been reproduced with the author’s kind permission.