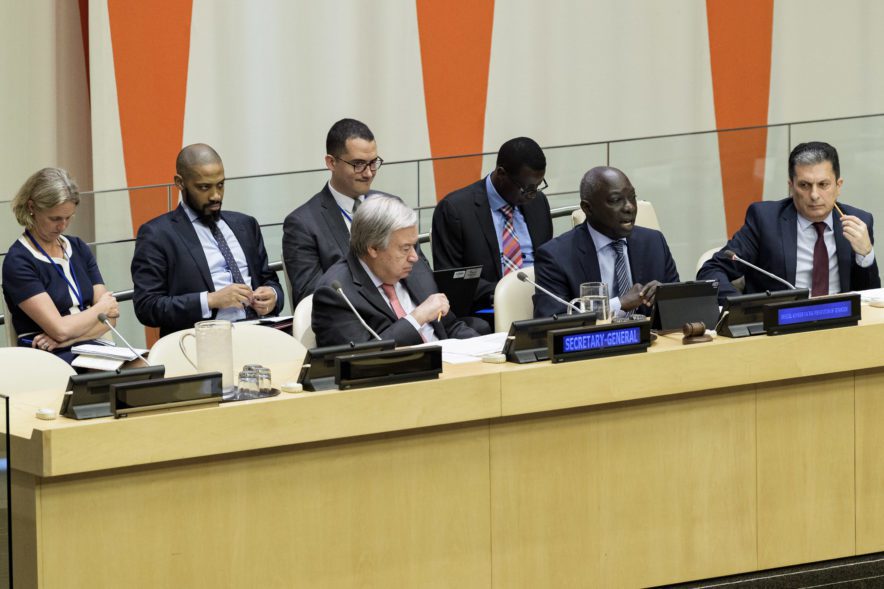 ‘Hate speech is a challenge from which no country is immune,’ stated Adama Dieng, Special Advisor on the Prevention of Genocide at the launch event of the UN Strategy and Plan of Action on Hate Speech. The system-wide strategy was launched amid a backdrop of surging levels of xenophobia, racism, and overall intolerance throughout the world. This trend has been amplified by social media and information communication technologies, which have become incubators for bigotry. Perspectives once considered extreme are moving into the mainstream in both liberal democracies and authoritarian States.

At the launch event, Secretary-General António Guterres argued, ‘hate speech has been a precursor to atrocity crimes, including genocide, from Rwanda to Bosnia to Cambodia.’ This link was also articulated in the independent inquiry into the involvement of the UN in Myanmar, composed by Ambassador Gert Rosenthal, in which he explains that sporadic episodes of violence directed at the Rohingya were ‘often fuelled by hate speech and intimidation.’ Tackling hate speech can therefore be a powerful tool for preventing armed conflict, atrocity crimes and violent extremism as well as protecting human rights and promoting peaceful, inclusive and just societies.

The UN Charter was drafted in the aftermath of ‘genocide on an industrial scale,’ the Secretary-General stated in his remarks. ‘Hate speech had sown the seeds, building on millennia of scapegoating and discrimination against the Jews, and culminating in the Holocaust,’ and he warned, ‘seventy-five years on, we are in danger of forgetting this lesson.’ For this reason, he tasked his Special Advisor Adama Dieng to develop a plan of action on addressing this important issue.

The issue of hate speech is not new to the UN. Historically, it has taken form in the broader context of religious intolerance. Although UN member States have made significant strides towards developing an international framework for addressing hate speech, multilateral efforts to mitigate this issue and implement policy at the national and global levels have been hampered by the sensitivity of the subject matter.

The impasse is a result of conceptual differences among States over how to combat religious intolerance. The European Union, along with the United States and other “Western” States, championed the freedom of religion approach, which maintains that freedom of expression should be near-absolute. Contrastingly, the Organisation of Islamic Cooperation (OIC) has traditionally favoured the defamation of religion method, which seeks to restrict freedom of expression when used to slander religions or its adherents.

Rather than prohibiting hate speech per se, international law criminalises the incitement to discrimination, hostility and violence. For decades, several States, including the United States (Brandenburg v. Ohio) and the European Union have maintained hate speech-legislation that prohibit specific inflammatory expressions of free speech. However, the precise threshold at which hate speech is believed to incite discrimination, hostility or violence is controversial and widely disputed.

Support for the OIC’s perspective has diminished over time. In 2010, acts of violence targeting religious minorities provided sufficient political will among the OIC States to find a compromise between the two competing schools of thought. This resulted in Resolution 16/18 on ‘combating intolerance, negative stereotyping and stigmatisation of, and discrimination, incitement to violence and violence against, persons based on religion or belief,’ adopted by the Human Rights Council in 2011. HRC Resolution 16/18, together with its intergovernmental implementation mechanism (the Istanbul Process), serves as the primary international framework for addressing hate speech. However, conflicting interpretations of the resolution have stalled progress on its implementation. OIC States argue that the resolution favours the United States’ interpretation of article 19 of the International Covenant on Civil and Political Rights (ICCPR) on the right to freedom of expression at the expense of paragraph 5(f) of Resolution 16/18 on criminalising incitement to imminent violence based on religion or belief.

Arguably, the most comprehensive attempt to bridge this divide was that of the Rabat Plan of Action—a set of recommendations compiled over the course of several expert-level workshops organised by OHCHR in Rabat, Morocco in 2012. The plan of action provides a six-point ‘threshold test’ to assess whether a given hate speech violates international law. Despite its promise, the Rabat Plan of Action did not alter the discourse on the issue of hate speech.

The UN Strategy and Plan of Action on Hate Speech

Realising the urgent need to address the recent surge in hate speech amid stalled intergovernmental efforts, the Secretary-General chose to provide greater clarity and understanding on this issue. The Strategy and Plan of Action defines hate speech as ‘any kind of communication in speech, writing or behaviour that attacks or uses pejorative or discriminatory language with reference to a person or a group on the basis of who they are, in other words, based on their religion, ethnicity, nationality, race, colour, descent, gender or other identity factor.’ Member States showed support for the initiative at the launch event. United States representative Courtney Nemroff endorsed the Plan of Action but stressed that it should not seek to set limitations on the freedom of speech, since doing so ‘has often served to protect those interested solely in maintaining the status quo or their own political preferences.’

The initiative’s objectives are twofold. Firstly, it seeks to enhance UN efforts to address root causes and drivers of hate speech. This goal is in line with the Secretary-General’s prevention agenda, which attempts to combat violence, marginalisation, and discrimination by prioritising early warning and early action as well as leveraging preventive approaches to human rights. Secondly, the strategy seeks to enable effective UN responses to the impact of hate speech on societies. To accomplish this, the initiative shoulders a compromise between the two schools of thought. While it accepts a relatively low threshold for what constitutes incitement to discrimination, hostility and violence, its plan of action addresses the issue by promoting positive counter-narratives as opposed to setting limits on the freedom of expression.

The plan of action lists 13 commitments that the UN will endeavour to take, including monitoring and analysing the root causes of hate speech, supporting hate speech victims, employing mediation techniques, making better use of technology and education, leveraging partnership with social media companies, building the skills of UN staff, and engaging in advocacy to highlight hate speech trends of concern.

Until recently, implementation of HRC Resolution 16/18 was at a standstill. Considering that the main obstacle to addressing hate speech is one of policy implementation rather than policy development, the Strategy and Plan of Action should support country-level efforts to tackle hate speech, particularly if the initiative is employed by Resident Coordinators. However, as each UN agency prepares its own plan to combat hate speech, the Special Advisor on the Prevention of Genocide must ensure that plans do not conflict with one another, inhibiting cohesive and coordinated system-wide responses.

As noted by the Secretary-General, ‘public discourse is being weaponised for political gain with incendiary rhetoric that stigmatised and dehumanises minorities, migrants, refugees, women and any so-called ‘other.’’ As hate speech is increasingly used by political leaders at the highest levels of government, the UN will have to carefully navigate between the lines of countering hate speech and respecting national sovereignty.

While the Secretary-General has tended to favour backdoor diplomacy over outspoken advocacy, in his words, ‘silence can signal indifference to bigotry and intolerance, even as a situation escalates and the vulnerable become victims.’ If the Strategy and Plan of Action is to succeed, it must confront hate speech at all levels. Setting double standards will only serve to discredit the initiative and empower future perpetrators.

Feature photo: Launch of the United Nations Strategy and Plan of Action on Hate Speech, 18 June 2019 by Manuel Elias. Licensed under CC-BY-NC-ND 2.0