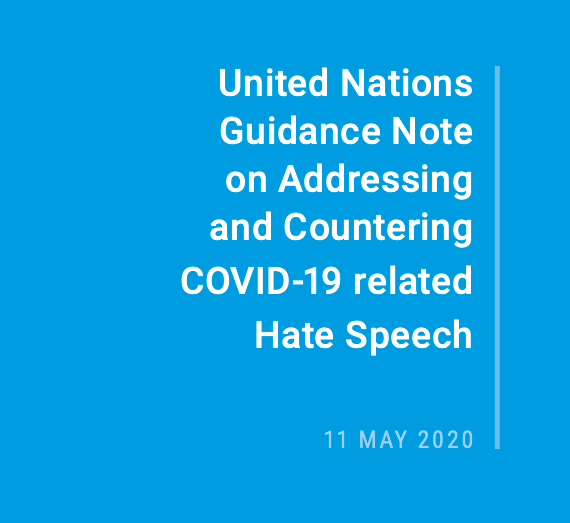 On May 8 the United Nations Secretary-General António Guterres launched a global Appeal to Address and Counter COVID-19 Hate Speech. A few days later, the UN published a Guidance Note on Addressing and Countering COVID-19 related Hate Speech. Both of these follow (and can build upon) steps taken by the UN in response to COVID-19, as well as the 2019 UN Plan of Action on Hate Speech.

The SG’s appeal also comes amid an increased awareness of how hate speech and discrimination have escalated during the crisis. Given the wide use of digital platforms and technology to disseminate hate speech, it’s also important that social media companies take notice; Facebook has just announced that it has removed a record number of hate-related posts from its platform. Back and April in the burgeoning world of digital meetings, webchats and webinars, the first ever RightOn webchat focused on how to combat hate speech and fake news, coming to similar conclusions as would appear the SG’s appeal.

The ‘Appeal to Address and Counter COVID-19 Hate Speech’ follows a number of statements and appeals issued by the UN Secretary-General in response to the COVID-19 pandemic. These include the Secretary-General’s appeal to governments to ‘make the prevention and redress of violence against women a key part of their national response plans for COVID-19,’ and his appeal for a global ceasefire.

At the end of April the SG launched an important new report calling for human rights to be placed upfront in guiding the international community’s response to and recovery from the COVID-19 pandemic. The report noted that the spread of the virus had been accompanied by a rise in hate speech. Under Section II ‘the virus does not discriminate; but its impacts do’, the report notes that ‘Member States have the primary responsibility to counter discrimination and hate speech but all actors, including social media companies, must play their part.’

In his appeal to counter hate speech, the SG notes that while global solidarity is critical during this crisis, ‘the pandemic continues to unleash a tsunami of hate and xenophobia, scapegoating and scare-mongering.’ These include anti-Semitic conspiracy theories, anti-foreigner sentiment, attacks on Muslim communities, vilification of migrants and refugees, and the notion that the elderly, considered most vulnerable to the virus, are expendable. He also notes that those on the frontlines of health care and information sharing during the pandemic, such as doctors, journalists, and human rights defenders, are at risk for such attacks because of their work.

The SG also highlighted the wide range of actors critical to combatting hate speech, including political leaders, educational institutions ‘to focus on digital literacy’, the media (particularly social media companies), and civil society.  The SG also specifically references as a critical tool the UN Strategy and Plan of Action on Hate Speech ‘to enhance UN efforts against the scourge.’ The initiative, launched in 2019, seeks to enhance UN efforts to address root causes and drivers of hate speech and to enable effective UN responses to the impact of hate speech on societies (for more on this, see our 2019 blog).

The UN has also issued a Guidance Note on Addressing and Countering COVID-19 related Hate Speech, which elaborates on the key points of the SG’s appeal. It also notes that hate speech, while spread by individuals, is being often advanced by mainstream and social media, and is most destructive when amplified by political leaders, public officials and religious authorities. The guidance note cautions that hate speech can further exacerbate the vulnerability of individuals and communities, not only to violence and the virus in the short term, but to intractable socio-economic inequalities in the long term. The note also advises social media companies, for example, on how to monitor and address hate-speech related content on their sites and recommends collaborating with relevant stakeholders including UN agencies and civil society.

The UN guidance note strongly echoes the SG’s recent report on COVID-19 and human rights, restating that human rights must be at the forefront of response and recovery efforts, stating that it is the role of the UN to support ‘States and other actors to develop and apply human rights-compliant measures to tackle COVID-19 related hate speech.’ The guidance note also frequently articulates the themes and findings of that report, including looking at countering hate speech as part of the effort to ‘build back better’ following the pandemic ‘by addressing the root causes of this phenomenon in our societies through promoting inclusion, solidarity and our common humanity.’

Both the UN guidance note and the SG’s appeal identify the role of social media, not only as a platform through which hate speech can be disseminated, but also as an opportunity for social media companies ‘to do much more to flag and, in line with international human rights law, remove racist, misogynist and other harmful content.’ On May 12, the Guardian reported that Facebook has found ‘a sharp  increase in the number of posts it removed for promoting violence and hate speech across its apps.’ Facebook reported having removed 4.7 million posts linked to hate groups in the first quarter of this year, up from 1.6 million in the previous quarter, as well as 9.6 million posts containing hate speech, compared with 5.7 million in the fourth quarter of 2019. According to the Guardian, Facebook attributed this increase to ‘improvements made to its technology for automatically identifying text and images’ and it ‘released the data as part of its fifth Community Standards Enforcement Report, which it introduced in response to criticism of its lax approach to policing its platforms.’

Last week, URG published a blog by Director Marc Limon on Facebook’s launch of a private sector-led human rights ‘Treaty Body,’ designed to monitor its own compliance with international human rights standards. Specifically, the tech giant’s new ‘Oversight Board’ will review Facebook’s decisions about what content to ‘take down’ (because, for example, it constitutes ‘hate speech’ or online harassment, or endangers safety or privacy) and issue final, transparent, unappealable decisions.

Combatting online hate speech during COVID 19 was the focus of the first ever Wednesday webchat held by the RightOn consortium. During the April 8 webchat, panelists discussed the priorities and actions that have been taken in relation to online hate speech. While they noted that hate speech has for a very long time been a concern for the UN, the Coronavirus outbreak demonstrated that no state is immune to racism, xenophobia, and discrimination. In order to combat the acceleration and dissemination of hate speech, the speakers emphasised the need for a strong human rights-based approach to COVID-19, given that the crisis impacts the entire spectrum of fundamental freedoms and rights. This reasoning is of course later reflected as well in the SG’s report on COVID-19 and human rights, as well as the UN guidance note on hate speech.

In regard to the involvement of the private sector, speakers agreed that on the need to involve tech companies. The creation of a social media council, analogous to the former press council, was proposed. The council would be independent of tech companies and would have the responsibility to develop common approaches in terms of regulation of hate speech. The next RightOn webchat can be found here.

The UN’s guidance note and the SG’s appeal both include references to the wide range of actors who have a role to play in either propagating or combatting hate speech, including social media companies, and civil society. This follows the increased recognition in UN documents and initiatives as to the role of a wider range of stakeholders apart from NGOs or State actors (such as religious leaders and labor unions) when tackling discrimination and hate speech. In fact the guidance note appears to be largely externally oriented, offering the majority of its recommendations to States, technology companies, media and civil society.

The explicit links in the guidance note to the SG’s recent report on human rights and COVID-19 is also promising and notable, indicating that this report does not appear to be a ‘one-off’, can and will be applied more widely as a framework to address COVID-19 related concerns, and potentially, to a process of ‘building back better’ that utilises human rights standards to build resilience that can immunise individuals, communities, States and regions to shocks that could otherwise provoke phenomena such as hate speech.

Given the emphasis on the guidance note and appeal on the role of social media platforms as pathways for hate speech, and that hate speech as escalated as a result of COVID-19, it is encouraging to see Facebook dramatically increasing the number of hate-related post it has removed. It is also positive to see Facebook utilise human rights standards as a guide to its responsibilities and approach to evaluating content. The group of experts participants in the April RightOn session came to the same conclusion, also reflected in the SG’s appeal and guidance note – that human rights is key to the identifying the dangers, root causes and appropriate solutions to hate speech.