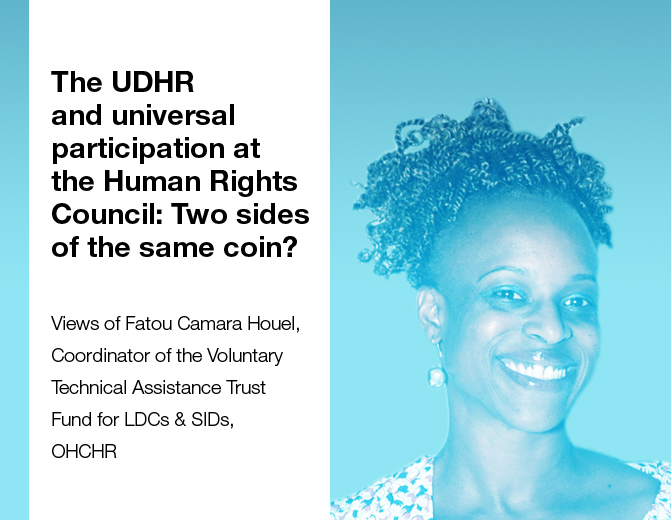 Ms. Fatou Camara Houel is the Coordinator of the Voluntary Technical Assistance Trust Fund to Support the Participation of Least Developed Countries and Small Island Developing States in the work of the Human Rights Council, administered by the Human Council Branch of the United Nations Office of the High Commissioner for Human Rights.

Do you know why the number 512 is associated with universality and why Friday 12 October 2018 is a landmark date for the United Nations Human Rights Council (HRC)?

512 is the current number of translations of the Universal Declaration of Human Rights (UDHR), making it the most translated document in the world.[1]

The Declaration was universal both in its letter and spirit primarily because the individuals who drafted the document came from various political, cultural and religious backgrounds. The main drafters included Eleanor Roosevelt, René Cassin of France, Charles Malik of Lebanon, Peng Chung Chang of China, John P. Humphrey of Canada and Hansa Mehta of India.

In the 12 years that have passed since the Council was established, 107 of the UN’s 193 Member States have been among the 47 Council Members. None of these countries had been SIDS from the Caribbean region until now. The election of Bahamas is recognised as a watershed moment because it signals the beginning of a new era of representation for a significant group of UN Member States, namely SIDS, in the main decision-making bodies of this global organization.

Why do I think that the number 512 and 12 October 2018 should be linked? Because both are based on fundamental principles of universality. Specifically, universality is encapsulated in the UDHR’s 30 articles while the Human Rights Council is founded on a universal approach to human rights and its commitment to deliberating human rights issues around the world. The question is therefore, how can we promote universality if we do not have genuine universal participation?

The role of the HRC is to address existing and emerging human rights challenges worldwide to ensure the full realisation of the rights outlined in the United Nations Charter, the UDHR and other international human rights instruments. A universal approach to human rights is fundamentally linked to universal participation in its work. In fact, universality was one of the founding principles articulated when the Human Rights Council was established.

Despite the letter and spirit of the UDHR and the founding documents of the HRC, as well as countless assertions of political will and a commitment to this ideal, it took 10 years for the Council to hold a universal session. It was on the occasion of its tenth anniversary, on 13 June 2016, that the HRC at last fulfilled its objective and held its first universal meeting. On that day, all 193 Member States of the United Nations met in Room XX in Palais des Nations to participate in the work of the HRC. Why was this amazing? Because two categories of States, namely, the Least Developed Countries (LDCs) and SIDS, representing more than one-third of the UN’s Member States, have always faced significant challenges in participating in the work of the HRC.

The degree of engagement of the LDCs/SIDS in the work of the HRC must be seen within the context of the challenges that they must overcome in order to participate. Today, there are still a dozen of LDCs/SIDS that do not have a Permanent mission in Geneva, making it difficult, if not impossible, to be fully engaged in the triannual sessions of the Council.

The LDCs/SIDS Trust: A game changer

Today, the LDCs/SIDS Trust Fund administrated by the Human Rights Council Branch of the Office of the High Commissioner for Human Rights, established pursuant to resolution 19/26, is widely recognised at the UN and among Member States and regional groups as both a success story and a game changer. A total of 100% of LDCs/SIDS from the Caribbean and Latin America and from Asia and Pacific and 91% of LDCs/SIDS from Africa have now benefited from the support of the Trust Fund. Of particular note: ALL of the LDCs/SIDS without a Permanent mission in Geneva have been assisted at least once by this 5-year-old Trust Fund.

The work of the Fund and the universality that informs its support for LDCs/SIDS to participate in the HRC falls squarely within the UN’s 2030 Agenda for Sustainable Development that was adopted by world leaders in September 2015. Given the importance of human rights, they should underpin the implementation of all 17 Sustainable Development Goals.

Taking the opportunity of a new momentum

The results of the 12 October 2018, HRC elections were impressive as two SIDS were elected to serve as Members. The Bahamas and Fiji were elected with 180 and 188 votes, respectively, out of 193. In their voluntary pledges, the Bahamas and Fiji referred to the work of the Fund. In addition, some countries that donate to the Trust Fund (Denmark and Italy) highlighted the importance that they attach to universal participation.

The recent elections represent an important opportunity for SIDS and may be a turning point for the HRC. To date, only two SIDS – Mauritius and the Maldives[2] – have served on the HRC. This is therefore the second time in the body’s history that two SIDS will be members of the HRC at the same time. It is worth noting that the resolution establishing the Fund was adopted when Maldives and Mauritius were members of the HRC. This is not a coincidence.

The announcement made by the Republic of Marshall Islands (RMI) at the last General Assembly that it would seek election at the HRC (2020-2023) was a welcome surprise and a positive signal that a country without a permanent mission in Geneva is keen to be part of the “Club of the 47.” At the time of writing this article, steps are being taken to open a RMI mission in Geneva.

Since 2016, the Trust Fund has enabled five government officials, all women, working in various ministries in this far away archipelago to participate in HRC sessions. Their experiences at the Council may certainly have contributed to RMI decision to seek membership on the Council.

In 2019, for the first time since the establishment of the Council, its President is coming from a LDC, namely, Senegal, which was also a beneficiary country of the LDCs/SIDS Trust Fund. If RMI succeeds in 2020, the Council will have 3 SIDS as Members. This will be a record number for the HRC!

How will the Bahamas and Fiji fulfil their voluntary pledges made at the time of their elections?

The Bahamas and Fiji can have a significant impact on the work of the Council by promoting the issues and topics that are important to many SIDS. They will have a golden opportunity to demonstrate that small Members of the HRC can make meaningful contributions to the promotion and protection of human rights, both at home and far away, and demonstrate, as I like to say, “the strength of the smallest in Room XX.”

It will also be of particular interest to monitor how the Bahamas will promote the Georgetown Declaration Towards 2022.[3]

One should, however, remain realistic and manage expectations. Despite the recent elections of these two SIDS, the total number of LDCs and SIDS that are Members of the HRC remains low.[4] This should serve as a strong reminder that although great developments have recently taken place, universality is not yet a reality.

In the period leading up to the two reviews, we should be guided by our firm conviction that “one size does not fill all” to ensure that “no one is left behind” on the journey towards the universal realisation of all human rights.

The views expressed herein are those of the author and do not necessarily reflect the views of the United Nations.

[1] The majority of the translations were carried out by volunteers who wanted to demonstrate their commitment to the text and help promote it so that it is better understood and therefore better implemented at the national level. The latest translations are in Fulfude, Hausa, Idoma and Ijaw, 4 languages from Nigeria.

[3] The Georgetown Declaration Towards 2022 is the outcome document of the first regional workshop organised by the Trust Fund for LDCs/SIDS of the Caribbean Region that was held in November 2018 in Georgetown, Guyana. It aims to facilitate the engagement of LDCs and SIDS with the HRC and its mechanisms.