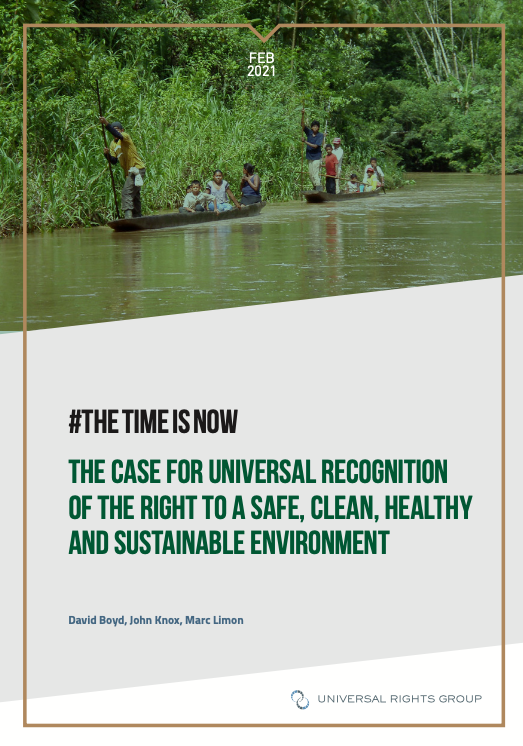 In recent years, there has been growing interest in, and movement towards, universal recognition of the right to a safe, clean, healthy and sustainable environment (R2E). Over one hundred national constitutions and several regional human rights agreements now recognise this right. This important historical shift is based on a recognition that a safe, clean, healthy and sustainable environment is necessary to human dignity, equality and freedom. In spite of the fact that the overwhelming majority of States already recognise some form of the human right to a healthy environment, the UN Human Rights Council and the General Assembly have yet to do so. Importantly, this situation might be about to change.

Over the past couple of years, senior UN figures (e.g., the Secretary-General, the High Commissioner for Human Rights, the Executive Director of UNICEF and the Executive Director of UNEP), a number of States, civil society organisations and UN independent experts, including the current and former Special Rapporteurs on human rights and the environment, have joined a growing chorus of support for universal recognition.

Moreover, in 2020 the Council’s core group on human rights and environment delivered two important statements that point towards the likelihood of universal recognition of R2E in 2021. The first was issued by Ambassador Stadler Repnik of Slovenia, who noted that the core group had initiated ‘a series of informal consultations on a possible global recognition’ of R2E. ‘I sincerely believe,’ she continued, ‘that the time has come to act together and to act now.’

With these historic steps, the international community has come within touching distance of what would be the capstone of a decades-long endeavour: the elaboration, declaration and UN-level recognition of the right to a safe, clean, healthy and sustainable environment.

Against this background, on 23 February, members of the Council’s core group on human rights and the environment, including Costa Rica, Maldives, Morocco and Slovenia, UN agencies and programmes including the Office of the High Commissioner for Human Rights (OHCHR), the UN Environment Programme (UNEP), and the UN Children’s Fund (UNICEF), UN human rights Special Procedures, the current and former UN Special Rapporteurs on human rights and the environment, David Boyd and John Knox, and the Universal Rights Group (URG), came together to organise a high-level event to set out the case for a final push towards recognition of R2E by the Human Rights Council and General Assembly.

The event featured high-level speeches and the launch of a new policy report telling the story of international discussions on human rights and environment, human rights and climate change, and the push for R2E, describing the broad normative contours of such a right, and explaining the benefits, for humanity, the environment and the climate, that would accrue from universal recognition.

H.E. Dr Mahendra Reddy, Minister of the Environment of Fiji, explained that the bill of rights in Fiji’s constitution includes R2E. ‘The words in our constitution mean that the protection of the natural world is as sacred as our right to free speech, our access to justice, our freedom of religion,’ he said. By including this right in the constitution, ‘we have safeguarded environmental protection as supreme law, a commitment that cannot blow with the political winds.’

The Minister explained that ‘threats to our natural world, like the climate crisis, are borderless. No ecosystem can be kept safe unless all are safe.’ This means that these interlinked crises can only be addressed ‘through humanity’s collective commitment’ – at the UN.

For that reason, ‘Fiji stands in wholehearted support of efforts to secure universal recognition of the right to a clean and healthy environment for all people.’ Fiji will continue to lead by example, he promised, ‘but unless the right is recognised at global level, and the environment protected everywhere across the green and blue economies – all of our rights are at risk. The time to act is now.’

H.E. Mr Rodolfo Solano Quirós, Minister of Foreign Affairs of Costa Rica spoke of his country’s ‘historic commitment to human rights and the environment.’ It is ‘one of over 155 countries that already recognises the right to a healthy environment,’ he said.

He expressed his firm view that ‘responsibility for the current health crisis, biodiversity crisis and climate crisis rests with humanity and our inadequate management of our relationship with nature.’ Universal recognition would thus represent an essential contribution to tackling these crises, and, more broadly, would bring ‘immense benefits for people and all life on the planet.’ This compelling case for universal recognition is, he said, clearly spelt out in ‘the report launched today.’

For these reasons, ‘Costa Rica will continue to lead international efforts to achieve this goal,’ promised the Minister.

H.E. Mr Abdul Ghafoor Mohamed, Foreign Secretary of the Maldives, then delivered a message on behalf of H.E. Mr Abdulla Shahid, Minister of Foreign Affairs. He spoke of Maldives’ pride at having led the charge at the UN, over the past 12 years, to link human rights, climate change and the environment, and explained that the Maldives had been one of the first countries to call for UN recognition of R2E. ‘We are nearly there,’ he said, ‘and Maldives, as a vulnerable Small Island State, will continue to lead the way as we face the final stretch.’

H.E. Ms Michelle Bachelet, United Nations High-Commissioner for Human Rights described the new report on the case for universal recognition ‘an important milestone’ for the international community. ‘I am proud to continue to contribute to this important cause,’ she said.

Universal recognition ‘is not just a legal question, although its legal foundation is sound. It is a question of survival, of what it means to be a human being and act in solidarity with others, it is about our rights – we are all dependent on the environment,’ said the High Commissioner. ‘Recognising the human right to a healthy environment means committing to advancing a safe and stable climate, healthy ecosystems and a non-toxic environment, with justice and inclusion for all.’

It would also serve to empower environmental human rights defenders, and those most vulnerable to environmental harm. ‘We should all have the right to stand up to protect our environment for present and future generations.’ Universal recognition ‘will empower everyone to exercise and defend this right through activist movements, political choices and through the courts.’ It will also, she argued, ‘encourage governments to implement this right, and the UN system to mobilise and support it.’

In conclusion, the High Commissioner said: ‘I am honoured to join you all in declaring that the time for recognition of R2E is now.’

H.E. Ms Henrietta H. Fore, Executive Director of UNICEF focused on what universal recognition of R2E would mean for children and their rights. ‘The environment crisis is also a child rights crisis,’ she said. ‘More than 1.7 million children under the age of five lose their lives every year because of the impacts of a degraded environment. Millions more suffer from preventable diseases for the same reason.’

That is why UNICEF supports global recognition of the idea that every person, every child, has the right to a healthy environment.

In that, UNICEF is also responding to the demands of young people around the world, ‘millions of whom are calling for change.’ Young people ‘are demanding urgent action to secure their right to a safe climate, to breathe clean air, to live, study and play in a clean environment, to drink clean water, to eat healthy food, and to protect biodiversity and the other species with whom we share our planet.’ UNICEF is listening, she said, ‘we hear their calls for change.’ She therefore called on more governments ‘to step up to commit to a safer, cleaner and healthier environment for all children.’

H.E. Ms Inger Andersen, Executive Director of UNEP noted that ‘it is almost 50 years since the right to a healthy environment first emerged at international level through the adoption of the Stockholm Declaration back in 1972.’ She noted the dual-way relationship in which ‘a healthy environment is integral to the full enjoyment of a wide range of human rights,’ while, at the same time, ‘protecting human rights is vital to protecting the environment.’

She expressed concern that the lack of recognition at global level is ‘creating protection gaps, especially for those who are particularly vulnerable to environmental degradation, including women, children and indigenous people.’ I am therefore in full agreement with the title of this meeting, she said: ‘the time is now.’ ‘Now is the time to recognise R2E at universal level so the right can exist for everyone, everywhere.’

With all this in mind, the head of UNEP declared ‘it is my pleasure [therefore] to join the call for universal recognition of the right to healthy environment.’ She urged governments to hear this call, and to act. Universal recognition of R2E is ‘not an option but an obligation,’ she said, an obligation ‘to protect the planet and to protect present and future generations.’

Closing the meeting, the chair (and author of this article), said that, on the basis of the strong statements delivered, the expert opinions of the past and current UN Special Rapporteurs, the momentum built over the past five decades, coupled with the large number of countries that have already recognised R2E, and the greater public awareness of the crucial inter-relationship between human rights and the environment that has emerged due to the climate crisis and the COVID-19 pandemic, together mean #TheTimeIsNow.