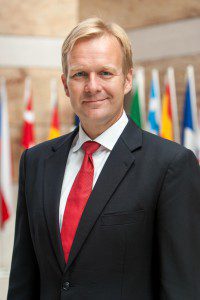 The weeks after a Human Rights Council session are a good time for reflection, a moment to take a step back and refocus. It is now almost one year since I took over as Head of the European Union Delegation to the UN here in Geneva, and much has happened during that time. For me, Geneva represents many things, but first and foremost I think of it as the human rights capital.

After a hectic 30th session of the Council and with the weather closing in, the summer seems a long time ago. Nonetheless, I am pleased to take this opportunity to reflect on an important moment for the EU’s global work to promote and protect the enjoyment of human rights. At the end of July, at the EU’s diplomatic headquarters in Brussels, intense negotiations culminated in the adoption, by 28 EU Ministers, of a new EU Action Plan on Human Rights and Democracy.

Today’s world is unstable and fast-changing, a world in which human rights and democratic values are often questioned – and in many places blatantly ignored. Human rights violations have increased in volume and intensity, civil society sees its activity curtailed, conflicts have become multi-faceted, and authoritarian regimes have become bolder. Globalisation entails new challenges, from increasing human mobility to the rising power of non-state actors; all of which makes the protection of human rights ever more complex.

In these circumstances, international attention is naturally focused on stability. However, lasting stability cannot be achieved through security and economic prosperity alone. It requires democratic societies where citizens are heard, societies with non-corrupt and accountable governments, independent judiciaries, vibrant civil societies, free media, and independent justice systems. The post-2015 sustainable development goals (or the “2030 Sustainable Development Agenda”, as we should now become used to calling it), adopted in New York in September, reflect this objective with their emphasis on human rights and women’s rights as self-standing goals. This is also why the EU is determined to keep human rights at the heart of its external action.

A new Action Plan for a new era

Covering the period 2015-2019, the new EU Action Plan on Human Rights and Democracy will strengthen the implementation of existing EU human rights policies and reinforce its policy tools, and also guide our work in the Human Rights Council. It reinforces the mainstreaming of human rights across all of the EU’s activities and policies. It pursues greater efficiency and greater coherence between what we do inside and outside our borders. And it attaches particular priority to gender equality and women’s empowerment.

The idea behind the Action Plan is not new. The EU formulated a Strategic Framework for Human Rights and Democracy already in 2012, and the same year launched the first Action Plan. Much was achieved over the following three years. We developed guidelines on key human rights issues including the the question of the death penalty, torture, human rights defenders, women, freedom of religion or belief, LGBT rights. Furthermore, we enhanced the effectiveness of our bilateral human rights and democracy work, promoted more coherent and coordinated action and outreach at multilateral level, and improved the mainstreaming of human rights across all areas of EU external action. The role of the first ever EU Special Representative for Human Rights, Stavros Lambrinidis, has been and remains instrumental in carrying forward our human rights agenda.

The new Action Plan (2015-2019) focuses on new challenges and on areas in which renewed political commitment and additional efforts are required. Focus areas include, inter alia: democracy support, which is going to be mainstreamed across a number of objectives; economic, social and cultural rights; addressing violations of human rights and international humanitarian law in crises and conflicts; the fight against discrimination, particularly against women, children, persons with disabilities and LGBTI persons, and also against members of religious minorities; and the fight against torture and the death penalty. The Action Plan also emphasises the need to increase the coherence of EU policies from a human rights perspective, and identifies as number of actions aimed at empowering agents of change in our partner countries (civil society organisations, human rights defenders, national and regional human rights institutions and mechanisms).

The new Action Plan contains 32 objectives, with timelines and clear attributions of responsibility to various EU actors. The objectives are grouped under five headings:

The new Action Plan does not endeavour to be exhaustive – it is strategic and focuses on priorities where additional political momentum and enhanced commitment are, in our view, most needed.

The EU runs several financial instruments that support human rights and democracy worldwide. These include the European Instrument for Democracy and Human Rights with a budget of € 1.249 billion (2014-2020), and the Instrument Contributing to Stability and Peace with a budget of €2.4 billion (over the same period). Other funding sources that incorporate the advancement of human rights and democracy among their objectives include the European Neighbourhood Instrument, the Development Cooperation Instrument, the Instrument for Pre-Accession Assistance, the European Development Fund, and, more widely, the CFSP budget.

How will the new Action Plan guide our work here in Geneva?

Human Rights are a key aspect of the EU-UN relationship. Multilateral human rights diplomacy is a core pillar of EU human rights policy and the EU is very active in UN human rights fora, regularly presenting initiatives on country situations of concern as well as thematic priorities, and actively participating in debates. The EU also often takes up human rights causes in international negotiations and supports human rights mainstreaming across the whole spectrum of UN action. The EU works closely with the UN secretariat and its agencies, funds and programmes, partnering on a range of global issues and challenges.

Many of the priorities presented in the new Action Plan mirror actions we are already taking at the Human Rights Council. We have vigorously supported the role of civil society organisations and human rights defenders in the Council’s work ever since the body’s creation. We have consistently spoken up in defence of the universality of human rights, as well as the independence of the OHCHR, the Special Procedures and the Treaty Bodies. We have continuously brought country-specific situations of concern to the Council’s attention, either through our own EU initiatives (such as on the situations in Myanmar/Burma, Belarus, and DPRK – the latter together with Japan) or by lending our support to initiatives led by others (as the case for resolutions on the situations in Syria, Iraq, Ukraine, South Sudan, CAR, and many more).

The EU has also led on a range of important thematic issues at the Council, including the rights of the child, freedom of religion or belief, the death penalty and use of torture, freedom of expression, gender equality and women’s rights, racism and discrimination, LGBT rights, and economic, social and cultural rights

In this respect, the new Action Plan is perhaps not ground-breaking. What it does do, however, is deliver renewed impetus to our human rights policy. The Action Plan, which has been endorsed at the highest political level, will help all relevant parts of the EU – including the European Commission, the European Parliament, the European External Action Service (EEAS) and its network of 139 EU Delegations around the globe – to mainstream human rights even more into their work, and promote coherence in our external action.

The value and the credibility of the Action Plan lie in its concrete goals and targeted actions, each with defined deadlines and responsibilities. A mid-term implementation review, set for 2017, will allow an assessment of the progress made, and will coincide with a review of external financing instruments. Responsibility for the Action Plan’s implementation now lies with the EU and its 28 Member States. But in order to realise the Plan’s objectives, and see words transformed into genuine improvements in the enjoyment of human rights for all, the EU will continue to rely on the support and partnership of our friends in the international community, including here in Geneva.