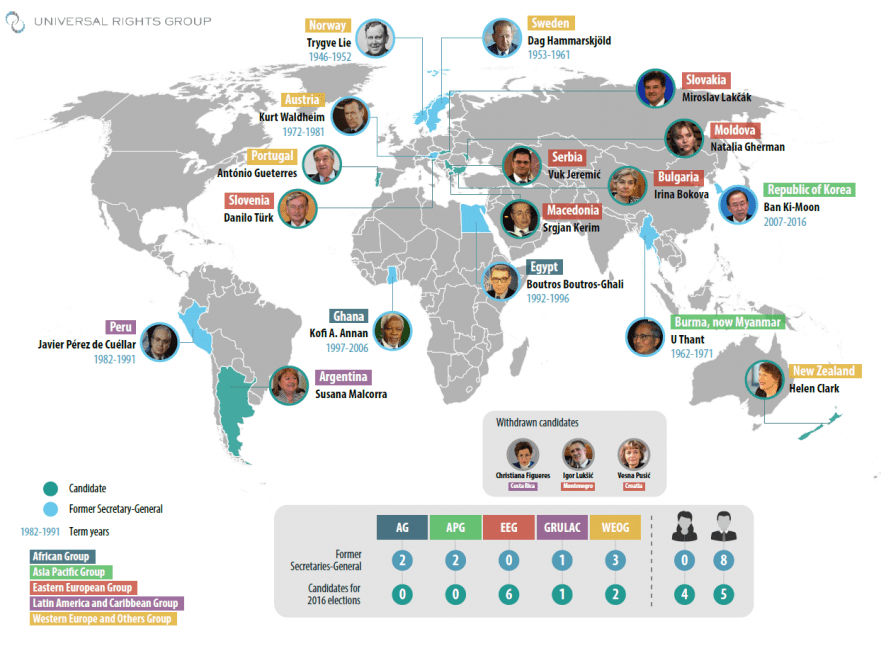 In January, a new UN Secretary-General will take over from Ban Ki-Moon. As described in URG’s recent policy brief: ‘Candidates for the post of Secretary-General: where do they stand on human rights?’ the selection process for the new Office-holder has been the most open and transparent since the founding of the UN. Although the formal inter-governmental decision-making process has not changed (for example, the Security Council does not publish the results of its straw polls), this year, for the first time, reforms have been introduced to open the process up to wider participation and scrutiny, by, inter alia, asking the candidates to provide vision statements, convening informal dialogues and ‘town hall’ meetings, and allowing civil society and the media, in addition to States, to engage with the candidates. This has, in turn, allowed for more debate on issues such as gender balance and geographic rotation. It has also allowed for greater public scrutiny as to where the candidates stand on key challenges facing the international community – including in the area of human rights.

Figure 1 – Original candidates for the 2016 elections of UN Secretary-General.

This year’s selection process has seen strong public demand for the UN to appoint a female Secretary-General. Drawing attention to the fact that all previous Secretaries-General have been men, campaigns such as the ‘Group of Friends in Favour of a Woman Candidate for Secretary-General of the United Nations,’ a cross-regional initiative of 48 States, have made the case that if the UN is serious about gender equality and equal opportunity, it is time for the Organisation to appoint a woman to its most senior post.

Unfortunately, despite these and other campaigns, it seems increasingly unlikely that the next Secretary-General will be a woman. While half (six out of twelve) of the candidates originally nominated by States were women (see Figure 1), the four ‘straw polls’ so far held by the Security Council have consistently seen States express greater ‘encouragement’ to male candidates than female ones (see Figure 2). 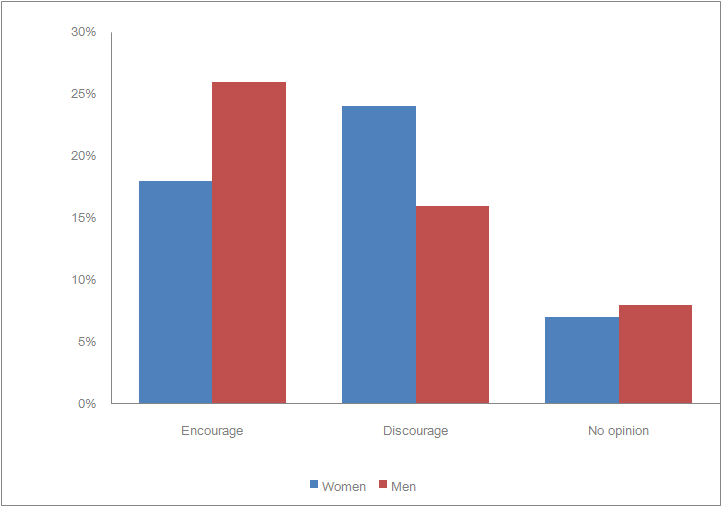 Remarkably, the (leaked) results of the last straw poll (see Figure 3) show the top four places all held by men. Early female favourites for the post of Secretary-General, such as Irina Bokova and Helen Clark, have struggled to win support. Indeed, only two women – Ms Bokova and Susana Malcorra – have ever featured in the ‘top five’ during the straw polls. Moreover, female candidates have dominated the bottom five places in all four straw polls. Finally, of the three individuals who have officially withdrawn their candidatures (Vesna Pusić, Igor Lukšić, and Christiana Figueres) two are women, (there are also rumours that Natalia Gherman will soon withdraw her candidature).This represents a stark reminder that world governments tend to be better at talking about gender equality than they are at putting the principle into practice.

There may, however, be a late ‘twist in the tale.’ There are rumours that another Bulgarian, Kristalina Georgieva[i], a current Vice-President of the European Commission, may enter the race, endorsed by Hungary, Latvia, Croatia and, perhaps, Germany. This would however (most likely) require Bulgaria to switch its support from Ms Bokova to Ms Geogieva, something that the country’s Prime Minister recently ruled out – at least until the next straw poll scheduled for 26 September.

Campaigning for the post of Secretary-General has also seen many arguments put forward in favour of appointing a candidate from the UN’s Eastern European regional Group (EEG). No individual from the EEG has ever before held the position of Secretary-General. Accordingly, despite the fact that Security Council Report has asserted that ‘the actual history of the terms allocated between the regional groups does not establish a clear practice’[ii] with regard to regional rotation, eight of the twelve candidates initially endorsed came from the EEG (see Figure 1).

As is the case with gender balance, there has been little indication so far, during the straw polls conducted by the Security Council, that States are inclined to give decisive importance to the promotion of regional rotation. The latest straw poll puts an individual from the Western Group, António Guterres (Portugal), in first place, (though there are rumours that the two ‘discourages’ he received in that poll were from China and Russia – veto-wielding permanent members of the Security Council).

That said, after Mr Guterres, the next five candidates who received the most ‘encourages’ during the straw poll were individuals from the EEG. Of those, Vuk Jeremić, the Serbian candidate, has consistently appeared within the top 5, while Miroslav Lajčák, from Slovakia, saw a significant increase in support during the most recent straw polls – jumping from ninth to second position.

Where do they stand on human rights?

According to URG’s recent analysis of the candidates and where they stand on human rights (contained in the above-mentioned policy brief), based on their vision statements and performance in the informal dialogues, Ms Bokova, Mr Lukšić, and Mr Guterres placed most emphasis on, and had the most ambitious vision for, universal human rights.

Their vision and proposals encompassed, inter alia, women’s rights, refugees’ rights, non-discrimination, and the interconnectedness of the three UN pillars. They all underscored the importance of promoting human dignity as a core aspect of the UN’s mission, and linked the enjoyment of human rights with the realisation of the 2030 Sustainable Development Goals. Mr Lukšić went perhaps the furthest in pressing for a strengthening of the UN’s human rights pillar, including by calling for the Human Rights Council to be elevated to become a main body of the UN, like the Security Council and ECOSOC.

The results of the straw polls so far do not give a clear indication of whether States have responded favourably to an emphasis on human rights. While Mr Lukšić was the second candidate to withdraw, Mr Guterres has topped the polls. 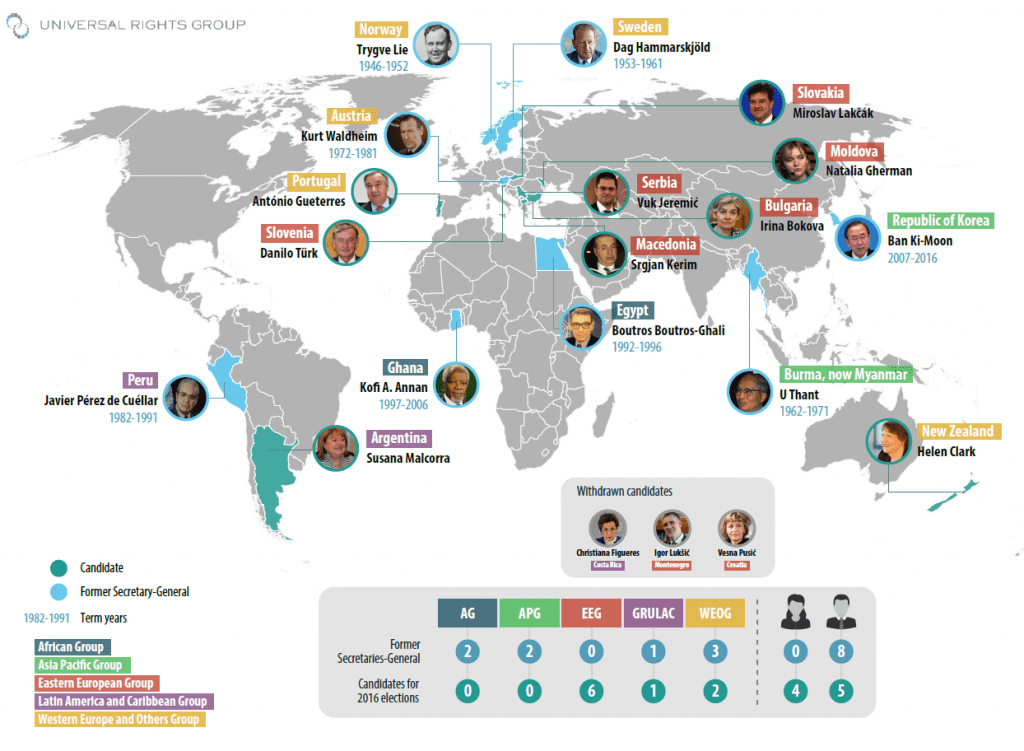