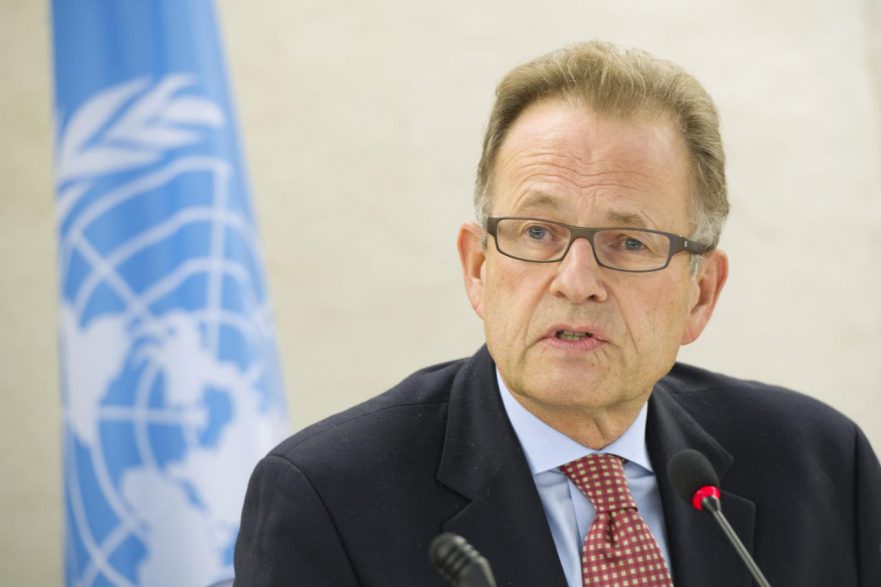 It was there from the beginning. In 1948, the United Nations General Assembly proclaimed the Universal Declaration of Human Rights. It’s a foundational text for the United Nations. A document that has been translated into more than 500 languages and displayed on countless classroom walls worldwide. Its drafters had the revolutionary – at the time – idea to expand the scope of human rights beyond the political or legal to include fundamental needs. Human rights now included the right to work, rest, healthcare, food, housing, social services, education, culture and many more. In short, they recognised the intrinsic link between human rights and the building blocks of development.

It is in part to reiterate the inherent bond between human rights and development that we are gathered here today. I would like to thank the Permanent Missions of Chile and Denmark, along with the core group – Ecuador, Luxembourg, Portugal, Rwanda, and Uruguay – and the Universal Rights Group, for making this timely event possible.

Timely because we are all embarking on an unprecedented exercise. For the first time, we have a collective, universal roadmap: the 2030 Agenda for Sustainable Development and its 17 Sustainable Development Goals. Now that we have drawn out the roadmap, however, it is time to set off on the journey. It is time to implement the SDGs at the country level. Yes, the 2030 Agenda was adopted in 2015 by the international community gathered in New York City. Implementation, however, won’t take place in New York and it won’t take place in Geneva. But, it will take place at the national and local levels, with the active participation of parliamentarians, regional and local leaders, civil society, the private sector and average citizens, to name just a few of the actors who must become the stakeholders in the SDGs.

Because while national governments have a central role to play, ‘localised’ implementation at the grassroots level is fundamental. The lessons learned from decades of development work are conclusive: solutions cannot be imposed top-down. Solutions must be based on the needs of local communities. They must be owned by local stakeholders. They must be open to bottom-up initiatives. They must not ‘leave anyone behind.’

Implementing the SDGs will be a complex equation, with many variables. Because, while the 2030 Agenda is divided into 17 SDGs, it is actually premised on the realization that progress in one field depends on action in another. That progress on development cannot be divided from action on the two other pillars of the United Nations: peace and security, and human rights. In other words, the traditional lines that divide disciplines from one another only serve to narrow our field of vision. All three pillars of the UN now have to pull together, in the same direction.

That is why there is no ‘SDG on Human Rights.’ The entire 2030 Agenda is premised on a foundation of human rights. The Agenda is universal, it is rights-based and it focuses on the most vulnerable. Human rights are part and parcel of every SDGs and if the implementation phase fails to take this reality into account then any progress made will ultimately prove illusory. Concretely, this means that human rights are not someone else’s responsibility. At the national level, this means that all line ministries have a stake in human rights, not just the ministry of justice. Within the UN System, it means that we all have a role to play in human rights, not just the Office of the High Commissioner on Human Rights or the Human Rights Council. Human Rights are at play when supporting Member States in bolstering healthcare institutions, setting up telecommunications infrastructure or facilitating financing of climate action projects, just to name a few.

Making this a reality requires a revolution in the way institutions – at every level of governance – operate. Bureaucratic divides and mentalities dating back to the post-war era must be broken. We can no longer afford to reward institutions and individuals for hoarding information and duplicating initiatives. Instead, we must incentivize partnerships and the sharing of information. We have to learn to contribute our competitive advantages to deliver on behalf of those we are meant to serve: first and foremost the most vulnerable among us. Since coming into office, our Secretary-General has led the way on this front in many ways. His focus on the prevention of conflicts is premised on a long-term commitment to sustainable development, the only way to address the root causes of conflicts. To deliver on the SDGs, he launched a far-reaching review of the entire UN Development System. This ongoing process aims to reposition the system to deliver on the SDGs and to mainstream human rights and gender equality. Part of this effort will involve a re-examination of the resident coordinators to make sure they have the quality, authority and impartiality to help make a tangible difference at the country level.

While implementation will not take place in Geneva, this city will play a central role as the global SDG hub. This role stems from three added values Geneva brings to the table. First, it is a unique ecosystem that brings together a wide range of actors with the expertise and knowledge to tackle conflicts, development challenges and human rights violations.

But Geneva is more than the sum of the individual actions undertaken by any entity. It’s also home to the cooperative mind-set required to bring the 2030 Agenda to fruition. It is a veritable laboratory, where the proximity of actors fosters collaboration, deep institutional knowledge is shared and parties are willing to experiment, to sometimes fail, but ultimately to make breakthroughs. Geneva is also more than a place where discussions take place. It is also a place where norms, standards and global decisions that impact all of our lives are made.

Finally, Geneva is unique for its convening power. Its ability to routinely bring together actors at the grassroots. Take the field of health for example. Home to over 100 UN and other international organizations, 178 representatives of Member States, some 400 NGOs, over 250 permanent missions and other delegations, a dynamic private sector and prominent academic institutions, Geneva offers a unique platform for both horizontal and vertical collaboration.

The 2030 Agenda is our best hope to leave future generations a safer, fairer and healthier planet, but it will fail if we cannot learn to reimagine the way we work. Like the drafters of the Universal Declaration of Human Rights, we must learn to see that development and human rights are interconnected. We must learn to incorporate a ‘human rights reflex’ into our actions at the grassroots, national, regional and global level.