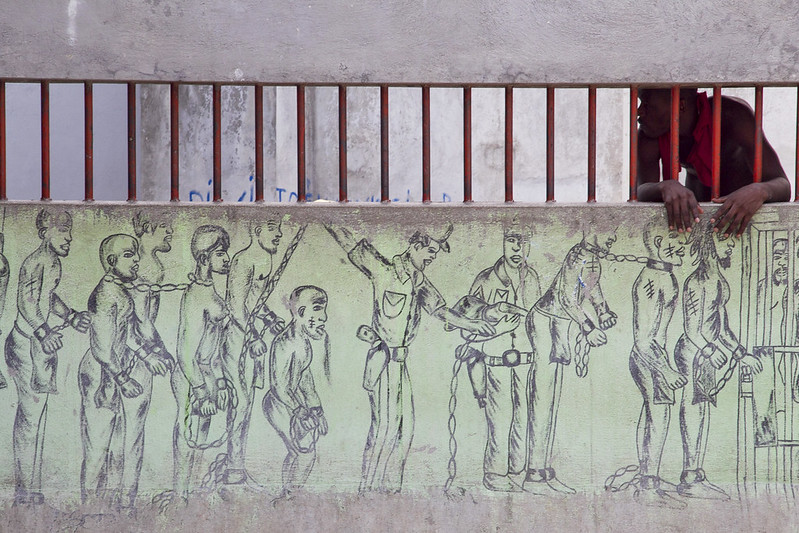 While the COVID-19 pandemic has exacerbated global health disparities, the group that has arguably been impacted the most is persons in detention. As the UN Subcommittee on Prevention of Torture (SPT), which supervises compliance with the Optional Protocol to the Convention against Torture[1], has pointed out, ‘persons deprived of their liberty comprise a particularly vulnerable group’. Nowhere has this been more prominent than during the pandemic.

For one, hard-won progress in the reduction of COVID-19 cases in parts of the developed world has been a result of, inter alia, the quick rollout of vaccination campaigns as well as social distancing, hand washing, and mask mandates. At a time when many prisons around the world are severely overcrowded, such hygiene measures have been near impossible to implement.

A recent OHCHR report entitled ‘Human rights in the administration of justice, including juvenile justice’, released ahead of the 47th Regular Session of the Human Rights Council, which concluded two weeks ago,  expressed concern about the convergence of a global health crisis with a prison crisis, which has led to a reduction in time out of cells, inadequate nutrition, and limited access to health services. During the session, the Working Group on Arbitrary Detention reiterated these concerns, drawing attention to the overcrowding of prisons and the impact this has on prisoners’ right to health, the right to mental integrity, and the right to be free from torture.

The Council session was an important step in raising awareness of the plight of persons in detention. Given the devastating impact of the pandemic on marginalised groups, perhaps the time has come for States to fundamentally rethink their prison strategies in order to ensure that nobody is left behind.

The human rights of persons in detention

The vulnerability of persons in detention often stems from their lives being placed in the hands of law-enforcement officers and prison officials. It is thus imperative that they receive the protection afforded to them by international human rights law.

The general prohibition against torture and other cruel, inhuman or degrading treatment enshrined in Article 7 of the International Covenant on Civil and Political Rights (ICCPR) and Article 2 of the Convention against Torture, to which 167 and 171 States respectively are party, applies with equal force to prisoners and persons in detention. Furthermore, Article 10 of the ICCPR stipulates that ‘[a]ll persons deprived of their liberty shall be treated with humanity and with respect for the inherent dignity of the human person’. Finally, in the context of a global health pandemic it is also important to refer to Article 12(1) of the International Covenant on Economic, Social and Cultural Rights (ICESCR), through which the 171 State parties ‘recognise the right of everyone to the enjoyment of the highest attainable standard of physical and mental health’.

In addition to these binding obligations, there are also non-binding guidelines which may serve as ‘authoritative guidance’ for the interpretation of States’ international legal obligations. Rule 24 of the Nelson Mandela Rules – the Standard Minimum Rules for the Treatment of Prisoners – provides that detainees are entitled to the ‘same standards of health care’ as other persons in the community; such care should be free of cost and administered without discrimination.

Additionally, regional guidelines and standards might complement international regulations. For States that are members of the Council of Europe, the European Committee for the Prevention of Torture (CPT) issued a set of principles on the rights of detainees at the start of the pandemic. European State authorities were cautioned not to allow COVID-19 prevention measures to infringe on detainees’ and their families’ rights to health and mental integrity. They suggested extending the use of bail for detainees where their imprisonment wasn’t imperative; to respect and implement the requirements of outdoor activity and fresh air; to allow detainees to maintain contact with their families, albeit over video communication, telephone, or email; to provide medical care to those in need; to ensure that psychological support is available; and above all, to reduce prison populations to enable social distancing.

How have these rights been violated during the pandemic?

Prior to the pandemic, a plethora of detainees’ human rights around the world were being violated, due to, inter alia, unhygienic living conditions and small spaces of confinement. The WHO has indicated that poverty, conflict, and discrimination contribute to ill-health, and that these three factors are rife in prisons. The pandemic has not only exposed but also exacerbated these violations and abuses, and reports from the CPT reveal that prison conditions often do not meet the health and safety guidelines recommended in light of COVID-19.

First and foremost, the ‘right to the enjoyment of the highest attainable standard of health’ has been curtailed. Often, prisons did not implement additional hygiene measures, and in the US, , with persons in detention being 5.5 times more likely to catch the virus than the general population. Other States, including the UK, vaccinated persons in detention in line with their national vaccination rollout plan, which prioritised certain groups – health care staff, the elderly, and then descending age groups. Despite calls from scientists, such as those from the Lancet, to make prisoners a priority group due to some suffering underlying health conditions and thus a heightened risk for contracting the disease, the UK government instead introduced tighter restrictions such as requiring detainees to stay in cells for 23 hours a day.

Detainees’ mental health was also severely affected. As the pandemic worsened, so did the mental health situation of persons in detention: vocational programmes and activities were suspended in countries such as Guatemala, and mental health services in many prisons were discontinued due to financial cuts. European countries like the UK, Belgium, and Denmark prohibited all family visits to prisons due to lockdown measures. In both Belgium and Denmark, this was compensated with extra calling time, but not all countries made such changes (the UK did not, for example). These inadequate responses not only violated the right to mental integrity of persons in detention, but they had repercussions for family members too, whose own mental well-being may also depend on visits, as emphasised in the European Prison Rules.

The most significant challenge, however, has been overcrowding. Synonymous with the global prison crisis, overcrowding violates both the right to physical health and mental integrity. Furthermore, in 2014, the SPT determined that prison overcrowding may constitute cruel, inhuman and degrading treatment, or even a form of torture when it is prolonged for months or years and combined with a lack of minimum acceptable material conditions. The precarious situation of the pandemic has worsened the issue in many countries around the world, including Mali, where a prison in the capital Bamako currently holds over 2000 prisoners – despite having been built for only 400 inmates. More recently, the Subcommittee on Prevention of Torture has warned that the COVID-19 pandemic might worsen the ill-treatment of detainees worldwide.

Similarly, the Special Rapporteur on the right to physical and mental health advised States to reduce incarceration where appropriate by closing compulsory drug detention centres, moving towards the decriminalisation of non-violent drug offences, and decriminalising same-sex activity and sex work. A study conducted in a Texas prison revealed that in order to keep COVID-19 transmission rates low, capacity would have to be limited to 85%, as opposed to the current 110% that one hundred States around the world have reported.

Yet few countries have heeded the call: less than 6 per cent of the global prison population had been released by June 2020. In fact, many States have done the opposite, and introduced prison sentences for those that disobey lockdown measures. In the Philippines, for example, since the start of the pandemic approximately 120,000 people have been imprisoned for violating curfew.

Although overcrowding has long been a human rights concern, States should view the pandemic as a catalyst to make long overdue changes to the global prison system. To alleviate overcrowding and the rise of COVID-19 infections, decarceration is imperative, and imprisonment for political offences, such as non-violent opposition to the government and peaceful assembly, should be ceased immediately. Drug detention centres should also be closed. Furthermore, early or provisional release of low-risk individuals – children, people with poor health, and people who have no history of violent offences – could further reduce prison populations.

To further protect vulnerable groups with pre-existing health conditions, it is essential that prison health services and public health authorities cooperate to ensure the continuation of treatment and care. All persons in detention should be regularly tested for COVID-19, treated as a vaccine ‘priority group’, and then vaccinated without delay and discrimination. This would facilitate family visits, which in turn would help ensure and protect both prisoners’ and their families’ right to mental health. Support programmes and networks must also be maintained so that detainees can remain in contact with the outside world.

Fortunately, prison authorities in some countries have adhered to the Special Rapporteur on physical and mental health’s calls, and initiated talks with public health institutions to help implement more effective COVID-19 measures. Prisons in Denmark are conducting testing for persons in detention; detainees in both Croatia and Morocco are transferred to hospitals if they test positive for COVID-19; and in Poland, when detainees that were previously homeless are released, they are taken to transitional facilities to help keep them safe, and then are rehoused in shelters. Certain States have expanded their psychological support services; in Argentina, for instance, there is a new protocol to support prisoners’ mental health during the pandemic.

But a more fundamental problem lies at the heart of the global prison crisis. As Eva Rieter, Professor of International and European Law at Radboud University, has noted, persons in detention are an inherently vulnerable group that often do not receive the care or rights they are entitled to, for the simple reason that they are an ‘unpopular political cause’. Long before COVID-19 upended our lives, detainee populations were suffering from a series of human rights violations which will persist once the aftereffects of the pandemic have subsided.

Whilst it is reassuring to see that at least some States are taking steps to prevent isolation, health emergencies and disconnection from communities amongst prisoners, such measures only solve part of the problem. Long-standing human rights violations of persons in detention can only be addressed at the root, and perhaps the time has come to fundamentally reconsider alternatives to incarceration.

[1] The objective of the Optional Protocol is to ‘establish a system of regular visits undertaken by independent international and national bodies to places where people are deprived of their liberty’ so as to protect persons in detention from torture and other cruel, inhuman or degrading treatment or punishment.