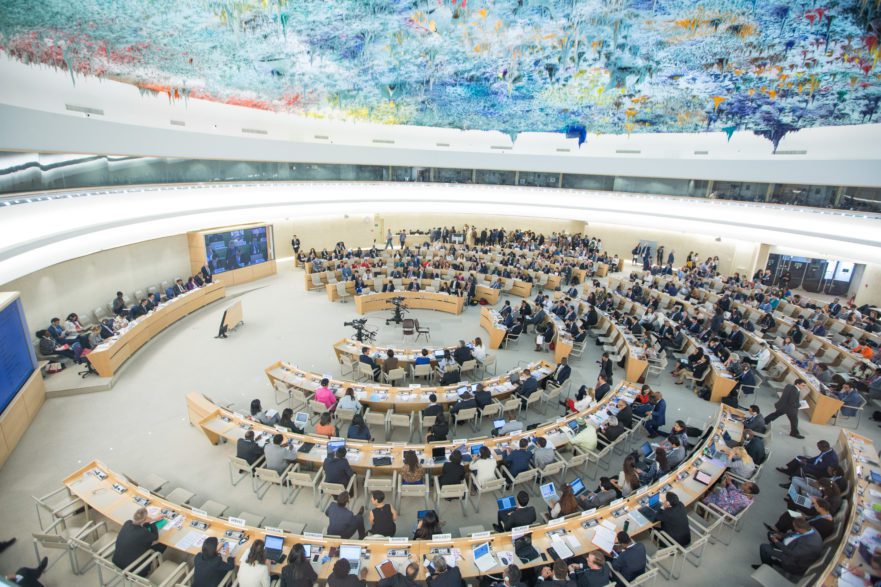 Last week (September 27) the Human Rights Council (the ‘Council’) adopted a number of resolutions that are relevant for Latin America[1]. However, one particular decision has taken the attention of human rights activists, professionals, and the media in the region. In a month that Latin America has seen a wave of news concerning the situation in Venezuela and its impact on the Bolivarian Republic’s neighbouring countries[2], the resolution on the ‘Promotion and protection of human rights in the Bolivarian Republic of Venezuela’ has attracted the interest of most.

Approved by a vote (with 23 in favour, 7 against and 17 abstentions) and sponsored by a group almost 30 States[3], the resolution ‘(e)xpresses its deepest concern at the serious human rights violations in a context of a political, economic, social and humanitarian crisis, as documented in the above-mentioned report; ‘(c)alls upon the Government of the Bolivarian Republic of Venezuela to accept humanitarian assistance in order to address the scarcity of food, medicine and medical supplies’ as well as the health issues currently afflicting its population; and further requests UN High Commissioner for Human Rights, H.E. Ms Michelle Bachelet ‘to prepare a comprehensive written report on the human rights situation in… Venezuela to be followed by an enhanced interactive dialogue, and to present an oral update on the human rights situation to the Council at its fortieth and forty-second sessions.’ 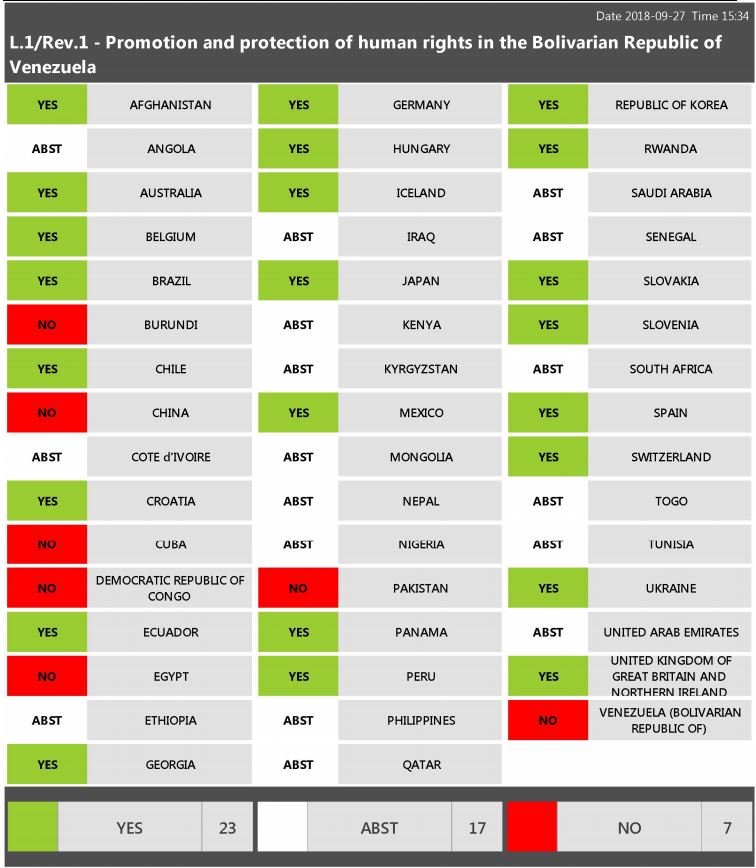 When presenting the resolution, Peru, on behalf of the sponsors, recognised the graveness of the situation in Venezuela, particularly for refugees, and remarked that the objective of the text is to give a voice to the millions of Venezuelans that are suffering a humanitarian crisis. States who voted against the resolution, i.e., Cuba and China, explained that for them the decision is not neutral but rather politically-based and selective. They further stressed that the text contributes to politicising agenda item 2, under which the resolution was adopted (see below).

Venezuela, as the concerned state, rejected the resolution and called it a hostile initiative that violates State-sovereignty and the founding principles of multilateralism. For the State, this decision is ‘the beginning of an interventionist escalation’ that responds to a political agenda.

Human rights activists, particularly in Geneva, have praised the resolution for considering it ‘unprecedented victory’ that places Venezuela in the loop of the international community. For them, it is an important first step that allows the UN to address the crisis that had remained outside the agenda of most global political fora.

However, another group of human rights defenders, mainly from Venezuela and Latin America-based, are not so happy. Against the backdrop of discussions on a possible military intervention and the rising numbers of murders, executions, and arbitrary detentions, among others; requesting a report from the High Commissioner is, for them, a ‘feeble’ solution.

Their disappointment is rooted in the fact that the OHCHR already has the authority to do such kinds of reports, and indeed, it just presented one that served as the basis for the Lima Group[4] ICC request and the resolution itself. They further argue that the decision does not mention specific violations and that it averts the establishment of a stronger mechanism, like, for example, a Commission of Inquiry – something that, for some experts in the region, might have been a better, sturdier alternative.

A more robust situation that prevents further deaths and conflict is urgent. For these activists, ‘it is too late to be taking first and small steps’ to address the crisis. For them, further political commitment and a serious investigation by an independent person or group of experts into the crimes allegedly committed by the Maduro regime, with a view to ensuring accountability, are what the country needs to start getting out of the crisis. Such a decision would have required, however, that the Council studied the situation in Venezuela under item 4 of the Council’s agenda[5].

But the Venezuelan resolution was adopted under item 2 – annual report of the United Nations High Commissioner for Human Rights and reports of the Office of the High Commissioner and the Secretary-General. It means the High Commissioner will include it within the summary of priorities she would present at the start of the 41st Council session. It also means that the Council is committed to addressing the situation, but outside of items 4 and 10.

It is, thus, as indeed Venezuelan and other Latin American activists have pointed, a small and first step. The question that remains is whether the outcome of this resolution will be timely and sufficient for putting an end to the crisis, ensuring accountability, restoring democracy, and preventing a military escalation.

[1] It, for example, approved a text on the rights of indigenous peoples and a decision maternal mortality and morbidity.

[2] In 26th September 2018, six States of the Lima Group – Argentina, Canada, Chile, Colombia, Paraguay, and Peru – requested the International Criminal Court to probe alleged crimes against humanity by the government of Nicolás Maduro. The unusual request – it is the second claim in which the complainants seek an investigation for alleged crimes that had not occurred in their territories, or in other words, a State has denounced another. The objective of the request is to turn into a preliminary examination already in progress into a preliminary investigation that would hopefully turn into a trial of President Maduro and other high-level officials.

[4] Six countries of the Lima Group, Argentina, Canada, Chile, Colombia, Paraguay, and Peru, signed and presented a formal request for the International Criminal Court (ICC) to open an investigation into the alleged crimes against humanity and human rights violations taking place in Venezuela on Wednesday 26th September 2018.

[5] To understand better the disappointment of the Venezuelan activists, it is worth mentioning that the Council typically adopts country-specific resolutions under three of its agenda items. Under Item 10 – technical assistance and capacity-building – the Council, studies the country-specific situations to which it can contribute to improving the promotion and protection of human rights. Under item 4 of the agenda- human rights situations that require the Council’s attention – the Council studies specific cases of human rights abuses. The result of item 4 resolution can be, either an OHCHR report, a country-specific special procedure, or a commission of inquiry. Item 10 decisions usually require the cooperation of the concerned State and have a more ‘positive’ connotation than item 4 decisions, which are regarded as signals of an already existing grave situation.