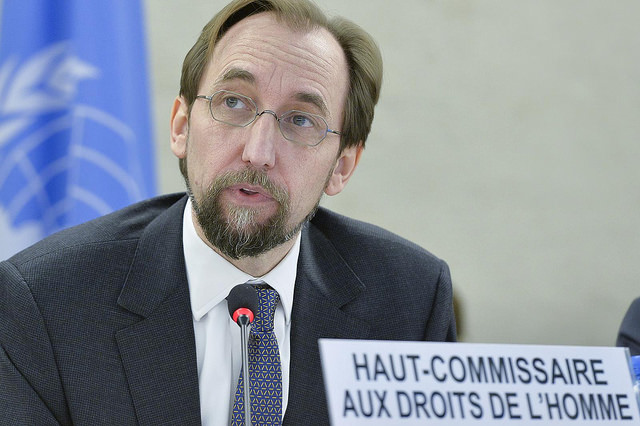 The former United Nations High Commissioner for Human Rights, Jordanian prince Zeid Ra’ad Al Hussein, ended his mandate on the 31st August and his successor, former Chilean President Michelle Bachelet, has just taken office. A large number of recent contributions praising Zeid’s term in office have cropped up and many paid tribute to his action at the head of the UN Human Rights Office. It is often highly valued that he denounced human rights violations wherever they occurred and seemed to have ignored diplomatic posturing and strategising. The media have notably focused on his public speeches, in particular the speech delivered at the Hague in September 2016, in which he criticised nationalists and populists, namely Viktor Orban, Marine Le Pen, Geert Wilders and even Donald Trump. For many, he is a “human rights hero”.

This is the mainstream perception. But for those who have a more thorough understanding of the UN’s inner workings, things are more complex and prince Zeid’s impact seems far more mixed. As fires broke out across the world, Zeid’s fiery speeches only fanned the flames instead of extinguishing them. What the last 70 years (since the adoption of the Universal Declaration of Human Rights) have taught us is that progress in this area requires diplomacy and strategies, which aim to encourage States to willingly support human rights. Public speeches or “megaphone diplomacy” can be part of this strategy, but it cannot be wielded alone. The High Commissioner’s untimely, aggressive and omnipresent public speeches contributed to the burning of any remaining bridges that may have existed with populist leaders already reticent at the idea of discussing human rights. Worse still, it also offended States favourable to human rights, who saw themselves burnt at the same stake as the worst dictatorships.

Zeid often positioned himself as the “last man standing” in the battle for human rights. Yet the High Commissioner is the head of a “Office of the High Commissioner” which, with a staff of 1,300 people approximately, constitutes the UN Secretariat branch in charge of human rights.. Meanwhile, Zeid also seems to have forgotten that the High Commissioner is not the only independent element of the human rights protection system: on top of the main political organ – the Human Rights Council, composed of 47 States – the “system” also includes a great number of experts, who are all completely able to speak up independently and denounce human rights violations and abuses around the world. Yet throughout the four years of his mandate, Zeid not only completely disregarded these independent organs’ potential, but actively participated in their weakening. While in control of the Secretariat’s resources, he maintained them at a strict minimum even at the risk of transforming these procedures into ineffective husks.

Zeid also forgot he was only one High Commissioner among many. Yet by declaring in a message to his personnel[1] that requesting a renewal of his mandate would amount to “bending a knee in supplication”, Zeid implied that his successor will not be able to operate freely, but will have to make compromises that he, “prince of human rights”, would of course have refused. This was a way of discrediting in advance the actions of anyone who would try to take up the mantle.

Today, however, nothing seems impossible if you understand that we do not need a romantic hero as the head of the Office of the High Commissioner for Human Rights. Above all we need a positive thinker, who knows how to make use of the energy and extraordinary potential of the human rights protection system, as well as how to work with States, case-by-case. Michelle Bachelet will need to rebuild the foundations: exercise real leadership in her Office to reassure and motivate those who work under her responsibility; strengthen the independent experts, who supervise and intervene in crises to save lives; connect their actions to the UN’s presence on the ground who can move issues forward on a continuous basis; use the political bodies to pressure and sanction States so that they respect their international obligations.

Our times are indeed difficult; but today we can count on a strong foundation of international obligations: nine “essential” Conventions; an unprecedented system for surveillance, which raises a flag almost in real time for each human rights violation in each country; intergovernmental organs, which openly discuss human rights, including through the mutual control mechanism, which is the Universal Periodic Review. In fact, never before have we had such tools for success.

On the eve of the 70th anniversary of the Universal Declaration of Human Rights, it is now more than ever time to find the hope, the combativity, but also the strategic thinking and the pragmatism, which animated its authors.