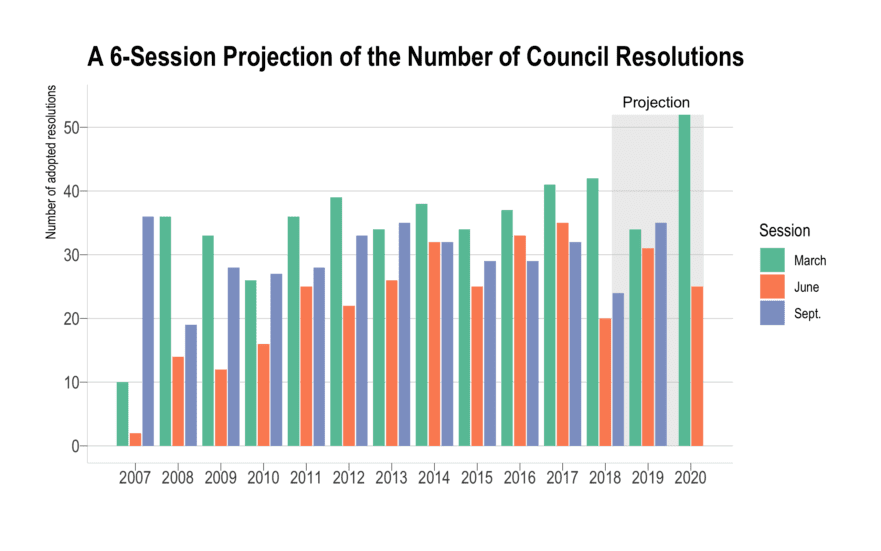 The 38th session of the Human Rights Council (HRC38) in June saw the largest drop in the number of adopted resolutions since the body’s establishment in 2006. This came against a backdrop of almost uninterrupted growth in the Council’s output over the past decade. Beyond providing an interesting talking point for Council delegates, the decrease (from 35 texts adopted one year previously to just 20 in June – see Figure 2 below) is potentially an important milestone for the Council – the moment the rapid quantitative expansion in its workload was brought under control, allowing (in principle) States and other stakeholders to focus on qualitative improvement and impact (i.e. strengthening the body’s effectiveness). But was the drop in June a sign that nearly four years of Council efficiency drives have finally started to pay off, or was it a one-off –  a temporary blip before its again business as usual?

In order to try to answer this question, the URG has created a computer model that seeks to predict, based on recent trends, how many resolutions are likely to be tabled over the next three and (with a lower degree of certainty/accuracy) six sessions of the Council. The results of this modeling are presented below.

The growing workload and output of the Council

Since its creation in 2006, members of the Council have drafted, negotiated and adopted 1,158 texts (mostly resolutions, though also decisions and presidential statements). From an average of around 70 adopted texts per year during the Council’s first years of operation, the number jumped from 2011 onwards, reaching a peak of 113 texts in 2017.

Each of these resolutions, it must be remembered, requires a great deal of time and effort on behalf of diplomats, officials in State capitals, NGOs and UN conference services. Perhaps even more importantly, most resolutions have ‘operative effects’ and related budgetary implications. For example, through an adopted text, the Council might decide to create or renew a Special Procedures mandate, dispatch a new Commission of Inquiry, convene a panel debate, or request a report from the High Commissioner. In other words, each resolution has a ‘ripple effect’ – placing ever-greater pressure on the Council’s programme of work, reducing the quality of debate, overwhelming small delegations and NGOs, and squeezing the time available for ‘genuine dialogue,’ and ‘results-orientated […] follow-up discussions to recommendations and their implementation.’[1]

In March 2014, Norway and Turkey began to deliver a series of joint statements (the first, at HRC25 was on behalf of 61 States) on ‘improving the Council’s methods of work.’[2] The statements drew attention to the growth in the number and length of resolutions, as well as unnecessary overlap with texts adopted in New York, and expressed concern at the implications of this expansion for the Council’s efficiency and, ultimately, its effectiveness.

Taking his cue from these statements, as well as from URG’s January 2015 policy report on ‘Ensuring relevance, driving impact: the evolution and future direction of the Human Rights Council’s resolution system,’[3] in February 2015, Ambassador Joachim Rücker of Germany, ninth President of the Human Rights Council, launched a first Council ‘efficiency drive.’ This was designed to respond to concerns that without remedial action the body might become ‘a victim of its own success,’ and that the quantitative expansion of its output should be brought under control, so that more emphasis might be placed on improving effectiveness and on-the-ground impact. One early result of this initiative was presidential statement PRST29/1 on ‘Enhancing the efficiency of the Human Rights Council’ (June 2015), which, inter alia, encouraged States to consider biennialising or triennialising resolutions (in line with relevant provisions of the institution-building package (IBP) and the five-year review outcome). Through PRST29/1, the Council also decided to ‘improve further the voluntary yearly calendar for thematic resolutions.’ Subsequent presidencies sought to continue this push, especially after the tenth President,  Ambassador Choi Kyonglim of South Korea, received a a letter from the Director-General of the UN in Geneva, Mr Michael Møller, warning member States that the UN’s conference services could no longer cope.

The current Bureau, led by Ambassador Vojislav Šuc of Slovenia, has sought to scale-up this drive for more efficient working methods by putting in place a more structured process of informal intergovernmental consultations which aims to: promote the rationalization of initiatives, create a more streamlined annual programme of work, and mobilise information technology.

Unfortunately, before June, these initiatives had failed to result in a discernible drop in the output of the Council. Indeed, the Council’s 37th session in March 2018 set a new record for the number of texts adopted in a single session: 42.

Then, at HRC38, the number of adopted texts unexpectedly and precipitously dropped to just 20 – the lowest number since June 2010.

But why? Was it the belated result of nearly four years of Council efficiency drives and thus the first sign of the emergence of a newly restrained Council? Or was it a one-off – a short-term anomaly?

How to predict the future

To answer this question, URG has constructed a computer model who tries to predict the number of resolutions that are likely to be tabled during the next three and (with a lower degree of accuracy) six sessions of the Council. The model is based on two variables: the periodicity of recurring Council texts, and the average frequency of new Council initiatives/resolutions.

To find the first variable, URG used its ‘Council resolutions portal’ to identify when a given recurring text is usually tabled during the calendar year (i.e. during the March, June or September session), and to assess whether it is (currently) tabled on an annual, biennial or triennial basis (based on the resolution’s history[4] rather than on the voluntary calendar of initiatives.[5]) With this information, it is possible to plot when future iterations of all recurring Council resolutions should be tabled (month and year).

The second variable is the average percentage of ‘new initiatives/resolutions’ sessions of the Council. This average was added to the model, to provide a ‘margin of error’ for the predicted number of resolutions per session.

After building this predictive model, URG tested it by using data to ‘predict’ the number of resolutions that should have been adopted at its 33rd to the 38th sessions. The test demonstrated a high degree of accuracy – even anticipating the drop at HRC38 (see Figure 1 – ‘An evaluation of the model performance.’[6])

The predictions of the model for the number of resolutions at HRC39, HRC40 and HRC41 are presented below (see Figure 2). 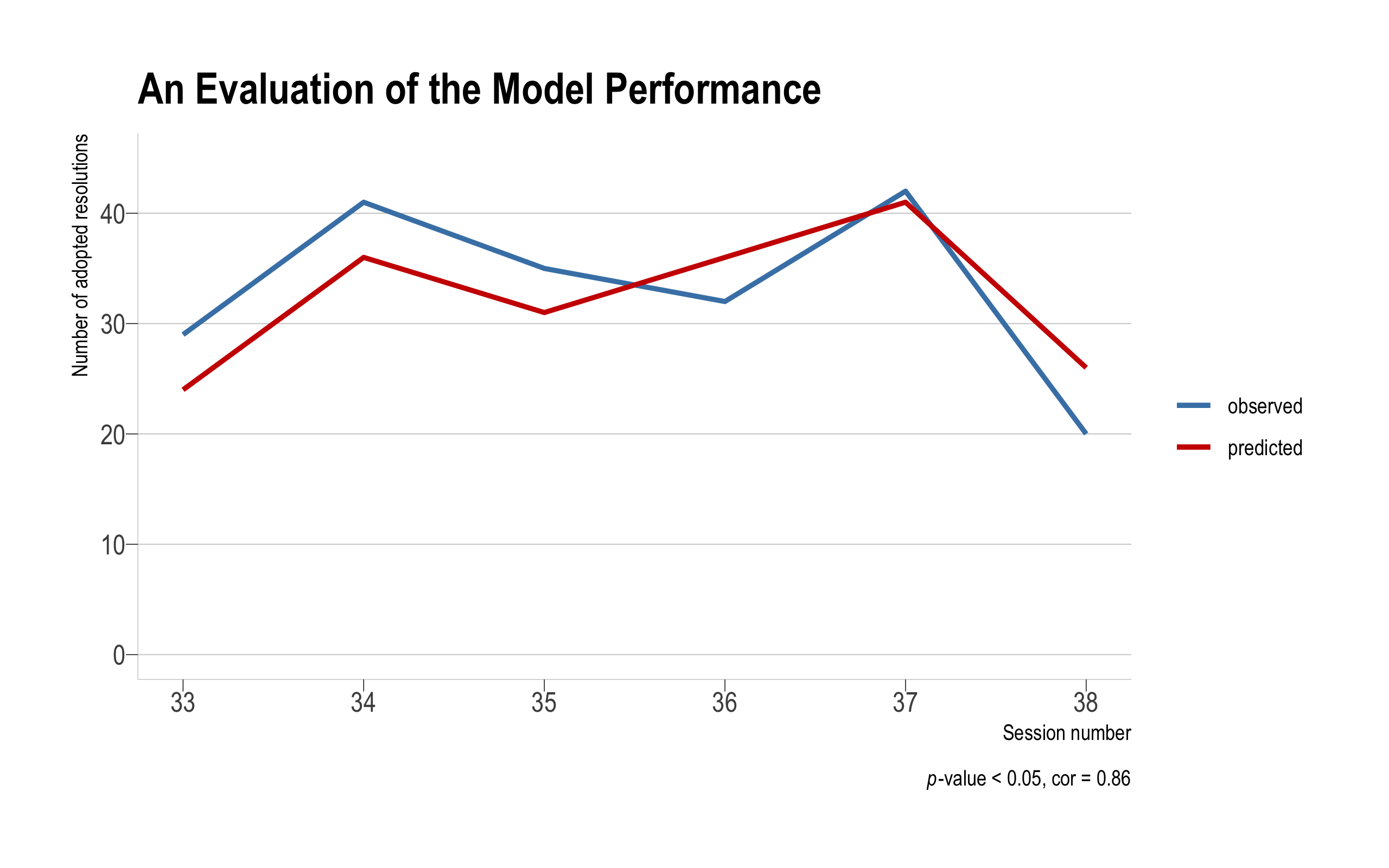 The results – what’s in store for the next three sessions?

The next three sessions of the Council (HRC39, HRC40 and HRC41) should all see a reduction in the number of adopted resolutions compared with the corresponding session (i.e. September, March June) of one year earlier.

Indeed, HRC39 (starting next month) is predicted to see a significant drop (around 24 texts) compared to HRC36 (when 34 texts were adopted). If correct, this would be the lowest number for a September session since 2008!

Similarly, HRC40 in March next year is predicted to see the adoption of 33 texts, nine less (42) than were actually adopted at HRC37. This is also a significant drop compared to adopted texts during the Council’s March 2017 and March 2016 sessions, though it is a roughly similar number to those adopted in March 2015 and March 2013.

Unfortunately, for June 2019, the news is less good. Our model shows that, based on current resolution periodicities (duly weighted for new resolutions), the number of adopted texts at HRC41 is likely to increase to 31 (from 20 in June this year). That said, even this number would represent a drop on the number adopted in June 2016 and June 2017. The next six sessions?

While the accuracy of our model has been tested only for a three session projection, we decided to extend it to try to predict the number of resolutions that might be adopted at HRC42, HRC43 and HRC44.

The results, which are presented in Figure 3, should of course be treated with a degree of caution. When and how often to table resolutions are political decisions taken by State representatives in Geneva and in capitals. They are therefore difficult to predict in the medium- to long-term. For example, a number member of the Council may decide to introduce a new initiative/resolution, or may pledge to reduce the periodicity of an existing initiative/resolution.

That said, based on current trends, it is predicted that the September 2019 session of the Council will see a sizable jump in the number of resolutions – up to around 35 (more than any June session since 2013).

But the real surprise (and a potentially unpleasant one at that) may lie in store in March 2020 (HRC43) when our model predicts that over 50 resolutions will be adopted! This is because of a possible ‘perfect storm’ when many annual, biennialised and triennialised resolutions are all due for tabling at the very same session. Whether this will happen in reality is, of course, open to debate; however, it does suggest that there should be no let up in the efforts of Council Bureaus to ‘reign in’ the number of Council resolutions. Indeed, URG’s findings suggest those efforts should be complemented by discussions on how to better ‘space’ and ‘synchonise’ the tabling of resolutions between years, and between March, June and September sessions.

However, the last predicted session, HRC44 in June 2020, may offer cause for renewed optimism. HRC is expected, based on current trends, to see a drop in the number of resolutions, from 31 (the number predicted for HRC41) to around 25. Although this is more than the 20 adopted this past June, it is significantly less than in 2016 and 2017, and would halt a pattern of cyclical three-yearly pattern of increases (for June sessions) going back to 2009. [5] The data used to build the model was based on the resolution’s actual history, which was mapped using the Universal Rights Group Resolution’s Portal, rather than on the vvoluntary yearly calendar of thematic resolutions. Preference was given to the resolutions actual history, as the voluntary calendar does not include country-specific resolutions. Furthermore, the voluntary calendar doesn’t appear to be up-to-date, as it still lists numerous defunct initiatives and does not reflect the biennalisation or triennialisation of other initiatives.

[6] The model faces some limitations. Firstly, the choice of some resolutions’ periodicity is open to interpretation. For example, it is sometimes unclear if a given resolution is annual or biennial. Secondly, the number of new initiatives by session is irregular, reducing therefore the predictibility of the model. Thirdly, the model anticipates neigher the changes in resolutions’ periodicity (for example from annual to biennial) nor their moves in monthly sessions (for example from the June to the September session). However, it is not a surprise that the contingent nature of politics reduces the performance of our model.