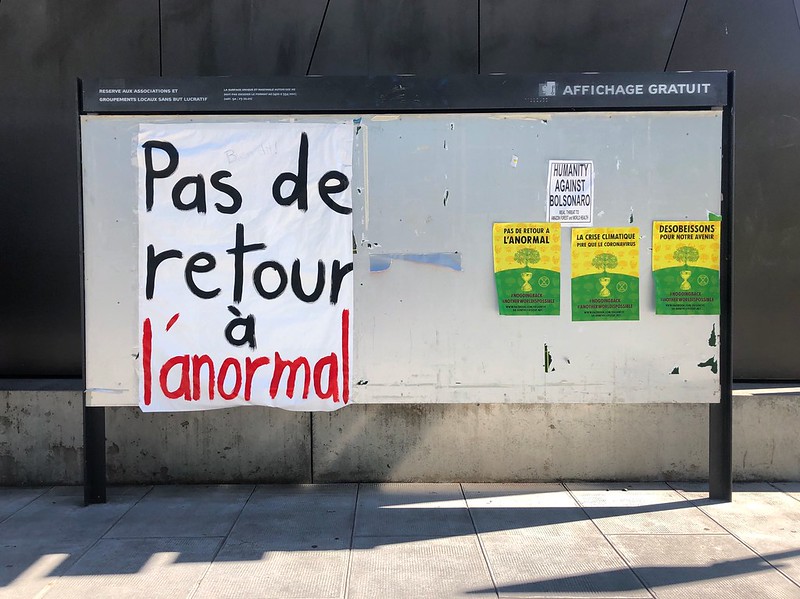 Oxfam recently published a new report, ‘The Inequality Virus’, which offers startling new data on the state of inequality around the world as a result of the COVID-19 pandemic. It demonstrates that COVID-19 has the potential to increase inequalities in almost every country at once – the first time this has happened since records began over a century ago. The virus has killed more than 2 million individuals and has trapped millions more in cycles of poverty, while the world’s richest individuals and corporations prosper. As such, the crisis has exposed existing inequalities, as well as the deeply flawed systems and structures of our current economies. Yet, the pandemic has also shown that returning to the status quo ante would be disastrous. Therefore, the international community and its individuals must strive to achieve more just and sustainable societies, and governments must commit to economic systems that serve everyone equally.

UN Secretary-General Antonio Guterres illustrated the multiple challenges posed by the COVID-19 pandemic when he stated: ‘COVID-19 has been likened to an X-ray, revealing fractures in the fragile skeleton of the societies we have built. It is exposing fallacies and falsehoods everywhere: The lie that free markets can deliver healthcare for all; The fiction that unpaid care work is not work; The delusion that we live in a post-racist world; The myth that we are all in the same boat. While we are all floating on the same sea, it’s clear that some are in super yachts, while others are clinging to the drifting debris.’

The pandemic lies at the origin of a ‘twin crisis’ affecting the world today, which includes not only the public health crisis but also the human rights crisis that followed economic collapse and increased levels of poverty in almost every country around the world. Moreover, due to intersecting inequities and embedded systems of structural discrimination, there have been disproportionate impacts on vulnerable and marginalised groups such as people of colour and women.

Oxfam’s report has come at a crucial time, demonstrating that while those at the top have been thriving, the majority, who were already living in poverty, saw their living conditions worsened. As stated in the report, COVID-19 spread across a world that was already extremely unequal. Meanwhile, the rise in inequality implies that it might take at least 14 times longer ( i.e. more than a decade) for the number of people living in poverty to revert to pre-pandemic levels than the nine months it took for the wealth of the top 1,000 billionaires, primarily white men, to recover. Moreover, Oxfam’s global survey of 295 economists from 79 countries illustrates that 87 per cent of respondents expect an ‘increase’ or a ‘major increase’ of income inequality in their countries, while over half of them agree that gender inequality will also increase because of the pandemic. The report reveals that current economic systems around the world only enable a small portion of the population to gain wealth during the worst economic downturns, while a large portion of individuals are left vulnerable to fulfil basic needs. The report also underscores the way in which the pandemic is deepening already entrenched gender, economic, and racial inequalities in numerous societies.

Since the start of the pandemic, the combined income of the world’s 10 richest persons (all men) has increased by half a trillion, which is enough to cover the cost of COVID-19 vaccines for everyone and to keep all people safe from the perils of poverty. While the richest are safe, millions have lost their jobs and have faced unemployment during the worst job crisis in over 90 years. Women have often been the worst affected by the pandemic because they are globally overrepresented in low paid jobs and in the informal sector, which were hit hardest by the pandemic. Notably, the Oxfam study found that if men and women were represented equally in these sectors, 112 million fewer women would be at a high risk of losing their jobs. It is also important to note that 70 per cent of the global health and social workforce is comprised of women, which puts them at a greater risk of contracting the virus.

The heaviest toll of the pandemic falls on people of colour and women, which further increases existing inequalities and vulnerabilities. The study found that Afro-Descendant people in Brazil are 40 per cent more likely to die of COVID-19 than those of Caucasian descent, while the mortality rate for Black and Hispanic people in the United States is much higher than for White people. Moreover, the likelihood of dying from COVID-19 is significantly higher if you are poor. In most of the poorer regions of countries including France, India, and Spain, infection and mortality rates are higher than in the richest areas. These inequalities form part of historical and contemporary stratifications based on race, gender, and ethnicity.

Despite the current grim situation, in which inequality is almost certain, it is not inevitable. Immediate action must be taken by governments around the world, who must act in solidarity to transform the current unequal economic system.

As everyone yearns for a return to ‘normal’ amid the current pandemic, we must not make the mistake of returning to pre-crisis levels of inequality. The pre-crisis economic system was increasing poverty and hunger as well as destroying the climate while a few privileged individuals accumulated wealth and millions of others suffered at this expense. Therefore, governments must take this moment of crisis as an opportunity to ‘build back better’ and ‘reinvent’, constructing economies and societies that are fair, inclusive, resilient, and leave no one behind.

According to the World Bank, if governments choose to take action to reduce inequality by two percentage points annually, we could return to pre-crisis levels of poverty within three years. If they do so, 860 million fewer individuals will be living in poverty by 2030 than if inequality levels are left to increase. Nevertheless, there is a shared international sentiment that this is not enough. Many argue that we should not return to the pre-crisis scenario but rather ‘build back better’ through radical reforms and recovery efforts. As outlined by Oxfam, this includes setting time-bound and concrete targets to reduce economic, gender, and racial inequality. Some of the measures that governments should take include: invest in free universal public services and ensure free access to vaccines for all; introduce income security and recognise, reduce and redistribute underpaid and unpaid care work that is done predominantly by women and ethnic minority women in particular; introduce progressive taxation of the richest members of society; prevent climate breakdown by ending all subsidies for fossil fuels; and end bailouts for fossil fuel corporations and their wealthy shareholders. In sum, governments must realise the urgency of taking action and build societies that are beneficial for everyone rather than a small group of privileged elites.

A policy brief issued by the Universal Rights Group entitled ‘A World Made New: Beyond COVID-19 to a low carbon, resilient and inclusive world’ offers a vision on how to achieve a more equitable world post-COVID-19. Specifically, it includes four strategic design principles and 15 practical recommendations to inform the development of stimulus and rescue packages:

Governments are already designing and deploying stimulus and rescue packages consisting of trillions of dollars. This money must be used wisely to restructure the economy for the benefit of all and address the root causes of inequality. The recommendations set out above provide important measures and principles that should be considered in the design and implementation of any reform strategy and to ensure that governments effectively ‘build back better’. As underlined by Gabriela Bucher, Executive Director of Oxfam International: ‘The fight against inequality must be at the heart of economic rescue and recovery efforts. Governments must ensure everyone has access to a COVID-19 vaccine and financial support if they lose their job. They must invest in public services and low carbon sectors to create millions of new jobs and ensure everyone has access to a decent education, health, and social care, and they must ensure the richest individuals and corporations contribute their fair share of tax to pay for it. These measures must not be band-aid solutions for desperate times but a “new normal” in economies that work for the benefit of all people, not just the privileged few.’

Another challenge that has gripped the international community is the question over equitable and non-discriminatory access to COVID-19 vaccines. In a UN General Assembly general debate that took place in September, world leaders urged for universal and equal access to vaccines to be recognized as a public good. However, despite pledges against ‘vaccine nationalism’, richer countries have used their wealth to get to the front of the vaccine queue and have willfully blocked poorer countries efforts to access vaccines. The International Federation of Red Cross and Red Crescent Societies (IFRC) has reported that nearly 70 per cent of the vaccine doses administered so far have occurred in the world’s 50 wealthiest countries. In contrast, only 0.1 per cent of these vaccine doses have been administered in the 50 poorest countries. In addition, reports suggest the World Health Organization’s COVAX programme, the main platform for ensuring equal access to the vaccine for low and middle-income countries,  is highly likely to fail in its objective to ‘deliver at least 2 billion vaccine doses by the end of 2021 to cover 20% of the most vulnerable people in 91 poor and middle-income countries, mostly in Africa, Asia and Latin America’.

This failure would mean that those living in poor countries could be left without any access to COVID-19 vaccines until 2024. Such unequal vaccine distribution would in turn further increase inequalities between and within countries, and result in major human rights implications for those living in poorer countries, especially on their right to health and the right to life. In this regard, Jagan Chapagain, Secretary-General of the IFRC, has warned that ‘without equal distribution, even those who are vaccinated will not be safe’. Indeed, fighting the COVID-19 pandemic requires international solidarity with a global solution. In this regard, Ambassador Umej Bhatia has underlined that ‘vaccine multilateralism’ can be the basis for us to build back better through a framework of international cooperation.

If sufficient efforts are not made to address rising inequalities – including in ensuring equitable access to COVID-19 vaccines for all – the startling trends of Oxfam’s report will inevitably continue. As such, it is imperative that the international community takes concerted action to build back better through transformative reform and recovery efforts.