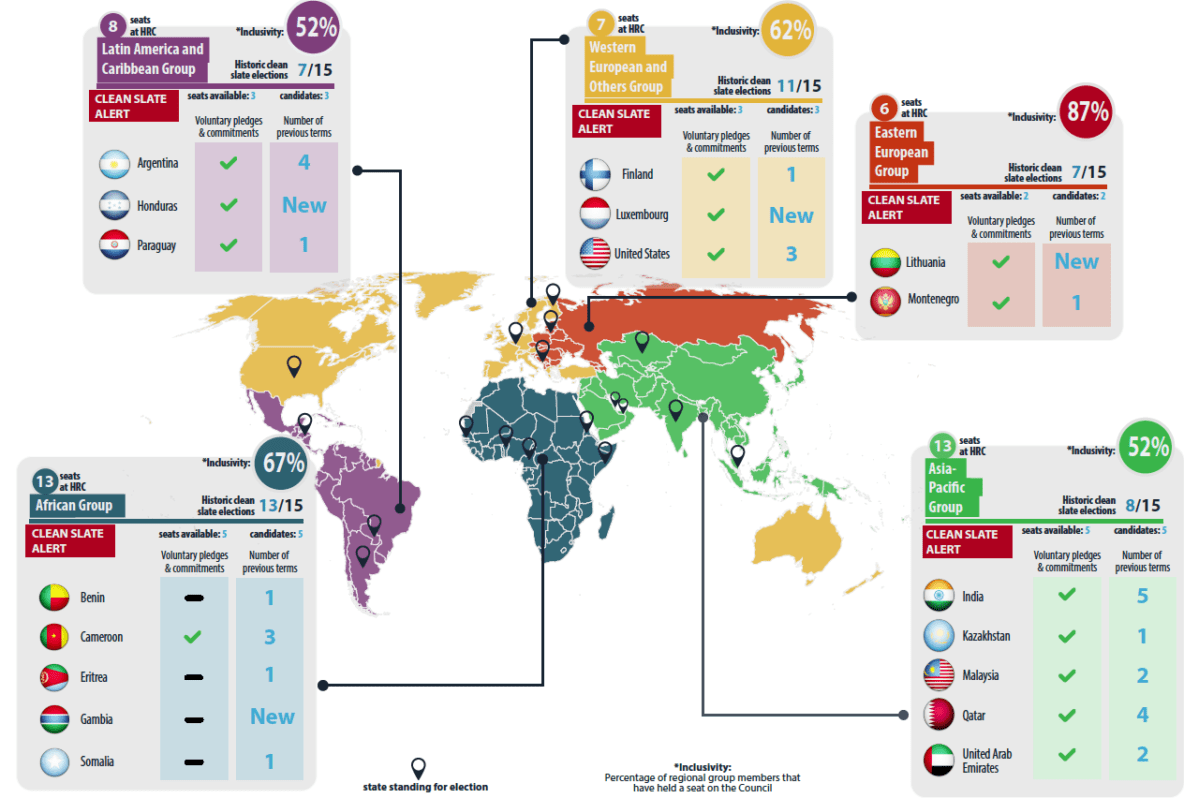 When UN member State diplomats sat down, in 2005, to discuss the size, shape, prerogatives and responsibilities of the new Human Rights Council, including how the new body would be different from its predecessor, the Commission on Human Rights, it is fair to say that the issues of elections and membership were at the forefront of their minds. The Commission had collapsed partly due to the repeated election of members (e.g., Libya, Sudan) that themselves stood accused of serious human rights violations. As a consequence, the US delegation to the General Assembly (GA), led by former Ambassador John Bolton, were adamant that the new Council should be a small body (of around fifteen members) made up, solely, of countries with ‘good human rights records.’ Others (especially developing countries), unsurprisingly, disagreed, arguing that the Council should not be significantly smaller than the Commission (53 members), and should be open to all UN member States, without distinction.

The eventual compromise, as set out in GA resolution 60/251, was a slightly smaller body (47 members), open to all, but with certain ‘criteria’ or ‘standards’ for election and membership. Notably, paragraph 9 of resolution 60/251 states that ‘members elected to the Council shall uphold the highest standards in the promotion and protection of human rights,’ and that when electing members, States should therefore ‘take into account the contribution of candidates to the promotion and protection of human rights [i.e., the required standards] and their voluntary pledges and commitments made thereto [i.e., the voluntary standards].’ The US, unhappy with this compromise, duly boycotted the new Council.

Things were to get worse (from a US/Western perspective). From the 2006 to 2015, even the relatively weak standards for election and membership set out in resolution 60/251 were largely forgotten or ignored. UN member States at the GA quickly reverted to basing their voting decisions upon largely (or even wholly) bilateral diplomatic concerns.

To counteract that trend, to remind States about the criteria for membership they themselves had set and agreed in 2005, and to encourage States at the GA to base their votes in Council elections upon human rights-based considerations, as guided by paragraph 9 of resolution 60/251, the Norwegian Ministry of Foreign Affairs and the Universal Rights Group (URG) launched yourHRC.org, a new online tool designed to contribute to international efforts to strengthen transparency around the Council and its membership. One of the key products of the yourHRC.org project is its annual Election Guide – a source of independent and objective information on candidates standing for election to the Council, including the degree to which they respect the criteria for election and membership set down in GA resolution 60/251.

The most recent election to the Council took place on 14 October at the GA in New York. Ahead of the election, Norway and URG disseminated, as each year since 2015, the yourHRC.org Election Guide to all Permanent Missions, and organised election events in both Geneva and New York. URG also released, for the second year running, candidate scorecards presenting synthesis ‘scores’ for each candidate, based on their ‘performance’ as compared to the criteria set out in resolution 60/251. Earlier, Amnesty International and ISHR also organised a pledging event for candidates, and released their own ‘scorecards’ comparing candidates.

For the 2021 elections, each regional group presented a ‘clean slate’ – meaning the same number of candidates were put forward as there were available seats. In some ways, therefore, the election results were a foregone conclusion (all candidates were elected).

Notwithstanding, it is still useful to look at the actual number of votes received by each candidate and compare that with the composite scores they secured in the yourHRC.org election scorecards. Such an analysis, which is presented below, provides a useful indicator of the degree to which GA delegations based their voting decisions on human rights considerations (in line with the criteria in resolution 60/251) or on bilateral diplomatic/geopolitical concerns. It is important to note, however, that yourHRC.org election scorecards are based only on the candidates’ cooperation records with the UN mechanisms and not on their promotion and protection of human rights on the ground.