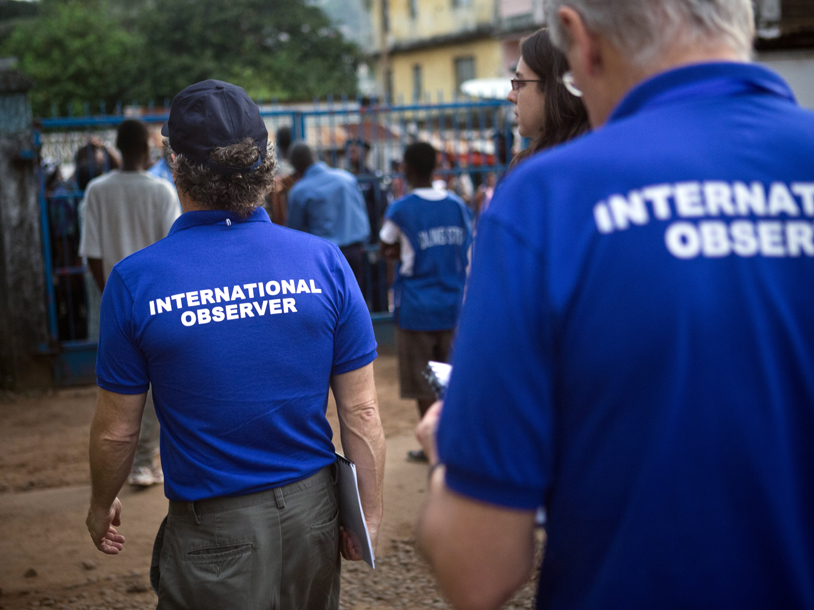 In 2018 alone, more than 100 electoral events took place around the globe, including in the United States where an estimated 113 million registered US voters turned out to cast ballots in a highly contested mid-term election. This year, elections will take place in every region of the world, including in two of the most populous nations, India and Indonesia.

The US is an outlier. Unlike most of the elections held in other parts of the world, the US mid-term elections were not widely observed by international elections observers. Large numbers of nonpartisan citizen elections observers did not deploy to polling stations around the country on election day. International technical assistance to administer the elections was not provided to any of the almost 10,000 jurisdictions responsible for administering elections across the United States. Unlike in the United States, technical assistance and the nonpartisan assessment of elections is the norm in most parts of the world and reflects international interest in promoting credible elections that advance security, facilitate full enjoyment of human rights, and reflect the will of the people. Roughly 85 percent of elections in ‘non-established’ democracies are observed.

Globally, elections are taking place in a rapidly changing and complex political and technological environment, with new challenges both for those working on elections and for those focused on human rights. Authoritarianism appears to be on the rise. Democracy and respect for civil and political rights, as well as trust in government, are reportedly in global decline. Participation in elections has, for some, lost its lustre.

At the same time, information technologies that promised more efficient electoral processes and more egalitarian access to a global community have shown their darker sides. ‘Technology’ can be used to cast a ballot, to count ballots, to tabulate vote counts, to verify the identity of voters and such. The internet and social media have changed how we communicate political opinion, receive information and organise, creating an opportunity for unprecedented connection. However, there are heightened concerns about how to protect freedom of expression and access to information and the right to privacy in an era of seemingly boundless memory. Technologies are also requiring human rights and elections experts, technologists and journalists to consider the unanticipated consequences of their use, including the use of technologies. In this context of rapid technological change, it is essential that the international human rights law upon which election assessments rely, and election assistance is built upon, continues to evolve to keep up. To do so requires a common approach and a shared understanding of how human rights values are implemented in the age of AI and algorithms.

If human rights and election practitioner share common goals and approaches to their work, what explains the lack of coordination to date? On the human rights side there has been hesitancy to address issues around elections and political participation that might be perceived as overtly political. However, this is changing. Recently, the UN Human Rights Committee gave concluding observations on electoral issues for a number of countries (e.g., Liberia, Democratic Republic of the Congo, and Madagascar) and will conduct follow up missions to assess implementation of election-related recommendations. In addition, special procedures are focusing more explicitly on the intersections between their thematic or country mandates and elections and political participation. As two recent examples demonstrate, in 2018, Dubravka Šimonović, the Special Rapporteur on Violence Against Women focused her thematic report to the General Assembly on violence against women in politics. Livingstone Sewanyana, the new Independent Expert on the promotion of a democratic and equitable international order, has also indicated that he will consider issues relevant to elections and political participation during the course of his mandate.

On the elections side, historically, practitioners have viewed elections as being at once a technical process, a political exercise upon which the legitimacy of government is based, and an expression of individual and collective human rights. These three elements are interrelated and cannot be divorced from one another. However, often the technical and political have taken precedence in the work of election organisations, prioritising concerns regarding political stability and conflict mitigation. For election observation organisations, a renewed emphasis on the human rights aspects of elections has proven less challenging in theory than in practice. In practice, ensuring that election assessments are consistently rooted in international human rights norms and standards requires robust methodologies for data collection and analysis. With an increasing number of rights-based tools and resources available to observation groups, important progress has been made in this regard. However, few election observation organisations have made effective use of human rights mechanisms as a means to advance the outcomes of their work and promote accountability for human rights and political participation. Conversely, international human rights mechanisms are not receiving the data-driven reporting that might be helpful as they consider issues related to participatory rights. For election assistance providers, whose principal constituent is the election management body, the challenge of balancing all three elements has been starker.

Practical challenges, a lack of communication between the communities and a failure to practically share information about each community’s work have compounded these larger issues.

In 2015, the Carter Center and the UN Office of the High Commissioner for Human Rights began the Human Rights and Election Standards project. Recognising the mutual interests and common goals of the two communities, but continuing gaps and lack of coordination between them, the HRES initiative began a conversation. Over the course of two years, participants in that conversation were broadened to include a range of human rights experts, representatives of civil society, representatives of states and others. Discussions focused on how election practitioners (particularly observers) could better engage with treaty bodies, special procedures and the Universal Periodic Review (UPR) process.

In 2017, the Human Rights and Election Standards Plan of Action was finalised at a culminating workshop. The Plan of Action summarises the practical and higher-level suggestions for cooperation and collaboration between the human rights and election communities, but also how they might together consider supporting norms and standards that reflect new challenges and embrace the all three elements of an election – the human rights, political and technical facets. Suggested action steps include an increased us of international human rights law and human rights mechanisms in the context of elections; identifying and addressing gaps in international law; exploring the need for new human rights mechanisms (as appropriate); improving communication and collaboration between human rights mechanisms and the election community; and supporting the role of civil society and NHRIs to promote electoral rights. Above all, the Plan of Action recommends that the conversation continue.

Find more information about the Carter Center and its Democracy Program here.

Avery Davis-Roberts is Associate Director of the Democracy at the Carter Center. She manages the Carter Center’s Democratic Election Standards Project, which seeks to develop the criteria by which observers assess a democratic process.