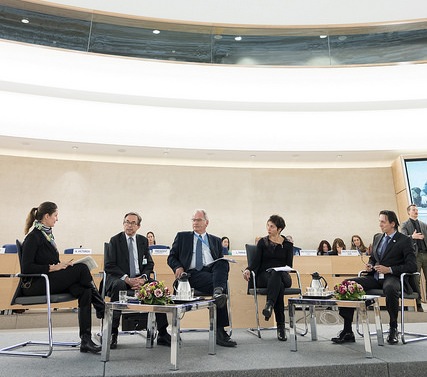 On Wednesday 28th February, the Human Rights Council marked the 70th anniversary of the Universal Declaration of Human Rights and the 25th anniversary of the Vienna Declaration and Plan of Action with a High Level Panel, as requested by Russian-led resolution 35/1. The discussion focused on the implementation of the provisions of these key human rights documents, including the benefits of enhanced international cooperation to that end. In a sign of renewed interest national-level compliance with universal norms, much of the discussion focused on the newly emergent ‘implementation agenda’ – how States might better translate their international obligations into improved laws and practices, and how the international community might better support them in that regard.

Recalling the conflicts and gross human rights violations that gave rise to the establishment of the United Nations and the adoption of the Universal Declaration, Mr Anatoly Victrov of the Russian Federation emphasised that these anniversaries provide an opportunity to reflect on how the international community might more effectively implement the promises made 70 years ago, and re-emphasised in Vienna.

In his opening remarks, High Commissioner Zeid stated that the panel was ‘as an occasion to reaffirm our commitments to these fundamental texts’ which enshrine the fundamental and principle that all human life is valuable. He reminded States of the consequences when universal rights are ignored or downtrodden. This view was echoed by other panellists including Mr Christian Strohal, former Special representative and Ambassador for the Vienna World Conference on Human Rights, Mr Christof Heyns member of the Human Rights Committee and former Special Rapporteur on extrajudicial, summary or arbitrary executions, who noted that the rights and principles set down in the Universal Declaration and the Vienna Declaration are, and must be seen to be, far more than a series of aspirations – they are inalienable rights protected under international law. States thus have an obligation to implement and realise them at national level, for the benefit of all.

During the ensuing debate, a wide range of States also called for a renewed commitment to implementation. For example, Australia, on behalf of the Mountains Group (Australia, Canada, Lichtenstein, Iceland, New Zealand, Norway, Switzerland), insisted that in order to ‘facilitate the implementation of both our human rights obligations and sustainable development commitments,’ States ‘must recognise and respect the interdependent and mutually-reinforcing relationship between human rights, democracy and development.’ Similarly, Mongolia stated that the most effective way to ‘promote and ensure implementation of these universal human rights’ is by ‘pursuing dialogue and cooperation and strengthening States’ national capacities,’ while the United Kingdom held that ‘we face a sustained implementation gap which we must re-commit to bridge with renewed focus on human rights as the third and indivisible pillar of the United Nations.’

The need to build a global human rights implementation and accountability agenda was also underscored by representatives of civil society. Human Rights Watch, for example, stated that: ‘During this celebration, it is important to acknowledge the gap between [the Declaration’s] promise and its implementation.’ Other organisations asked the panellists why, in their view, insufficient progress had been made towards closing the implementation gap.