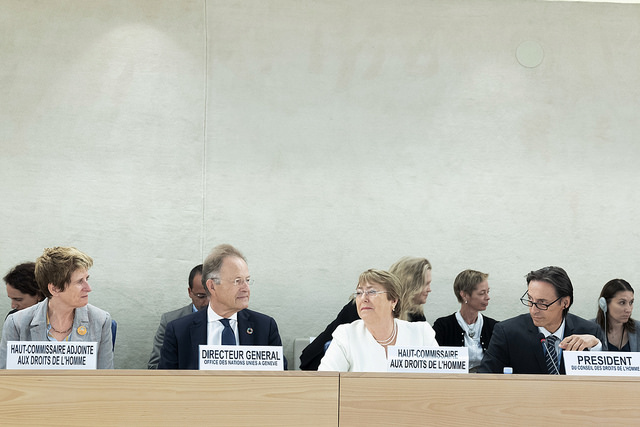 The new UN High Commissioner for Human Rights, Michelle Bachelet, marked the start of her tenure on 10th September with an inaugural address to the Human Rights Council (at the start of its 39th session). As with all inaugural speeches by new High Commissioners, the statement was closely watched by States, NGOs and the media for clues as to Ms Bachelet’s likely approach to the mandate, and any changes or innovations she may bring to the role. This was especially the case on this occasion, due to rumours that the UN Secretary-General, Antonio Guterres, wants to see a clean break from the approach of Ms Bachelet’s predecessor, Zeid Ra’ad al-Hussein, and that Ms Bachelet was appointed, in large part, with this wish in mind, (a situation extensively analysed in recent articles in Foreign Policy magazine, openGlobalRights, and URG Insights).

High Commissioner Bachelet delivered a strong and carefully balanced first speech. While she may lack the oratorical brilliance of High Commissioner Zeid, she nevertheless chartered a careful course between (and yet embracing) the widely different expectations and demands of different UN interest groups, and wisely focused on a number of key issues that will determine the future effectiveness of the international human rights system, and the wider UN.

She began by acknowledging the courage and achievements of her predecessor; rightly noting that he had become, during his time in Office, ‘the spokesman for those who are voiceless: the victims of human rights violations.’

The first part of the High Commissioner’s speech then sought to set out the broad parameters of her strategic approach to her mandate. In particular, she sought to simultaneously allay the concerns, on the one hand, of civil society and some Western States, which are concerned she may choose to avoid, or at least reduce the frequency and volume of, public condemnation of serious human rights violations; and on the other hand, of other States (especially developing countries), which would like the new High Commissioner to forge a more cooperative relationship with States, emphasising dialogue, consensus and quiet diplomacy.

The High Commissioner wisely understood that this was a false choice, and thus chose to commit herself to pursuing both goals – in line with the fullness of her mandate as provided by the General Assembly in its resolution 48/141 of 20 December 1993.

Regarding the role of the High Commissioner in calling out violations of human rights, and providing a ‘voice to the voiceless,’ Ms Bachelet was clear that this will remain a core part of her mandate and her work, and indeed, considering her personal background, it could never be otherwise. On the last point, she reminded Council delegations and NGOs that she has been ‘a political detainee and the daughter of political detainees; I have been a refugee and a physician – including for children who experienced torture, and the enforced disappearance of their parents.’

From this experience, and the wider experience of the brutal human rights violations committed by the regime of General Pinochet in Chile, she fully understands the importance of international condemnation of governments where necessary, and of the power of universal rights to engender and guide change.

‘Above all, I will advocate for the civil, political, economic, social and cultural rights that are the inherent entitlements of all people,’ she promised. ‘I will strive to be their voice and their strong defender, in complete objectivity, without fear or favour.’ ‘I bring with me’ she concluded, ‘my fundamental attachment to the courage, the dignity and selflessness of all defenders and activists for human rights.’

Furthermore, she reminded Council members that they too must never question or seek to diminish their responsibility, indeed their legal and moral obligation, ‘to speak out against every instance of human rights violations, regardless of sex, gender identity, race or ethnicity, religion, disability or migration status, or other characteristic. Irrespective of the type of political regime in a given country.’

After reaffirming her commitment to address situations of violations ‘without fear or favour’ and wherever they occur, Ms Bachelet revealed that she would nonetheless be different to High Commissioner Zeid, that she would chart a new course. In particular she explained her belief in working with States, which retain the primary responsibility for the promotion and protection of human rights, in a relationship characterised, where possible, by cooperation, dialogue and consensus.

While she had been a victim of violations, and the daughter of victims; she had, also ‘headed a UN body, and […] been honoured to lead my country, twice, as its President.’ She thus possesses the political skills and judgement, and an unwavering commitment, ‘to bridging the differences between communities.’

To drive real and sustainable human rights progress through the multilateral rules-based system, all parts of that system must work together and push in the same direction. Unlike High Commissioner Zeid who was often accused of dismissing or discounting the Council and its mechanisms, Ms Bachelet underscored her conviction that ‘we can only progress towards [our shared] vision together.’ ‘If we undermine multilateral institutions such as this one, we will fail to meet the challenges our people face.’

Notwithstanding ‘the political differences that may divide some of the countries in this room,’ she expressed her conviction that ‘this Council must strive for consensus.’ ‘I believe there should be more engagement by all member States – not sterile disputes; not withdrawals; but collective, coordinated and cooperative work to sustain core principles and common goals […] The most effective solutions are grounded in principle and in openness, in collective agreements and coordinated actions.’

‘It is States which have the primary responsibility for upholding the rights of their people. I will always listen to the concerns of Governments. As a former head of government and head of State, I have shared some of these concerns and faced some of the same challenges.’

‘I know that consensus is possible,’ she asserted. ‘I know that military leaders can commit to ending military intervention in democratic politics, and work to reconcile with the victims of oppression. I know that centuries of prejudice and discrimination – against women, against the peoples of the Global South and many other discriminated and exploited groups – can be pushed back.’

A close working relationship with the Human Rights Council

Following on from her expressed commitment to multilateralism, including forging (where possible) a close, cooperative relationship with States, and her expressed belief that the Office of the High Commissioner cannot secure human rights progress on its own, but only by working with other parts of the UN human rights pillar; High Commissioner Bachelet expressed her admiration and support for ‘the work done by this Council, its mechanisms and experts.’ The UPR, she noted, ‘ensures ground breaking scrutiny of the human rights record of every State in the world. The inquiries led by the Council’s fact-finding expert missions and Special Procedures have uncovered essential facts that must be addressed.’ ‘Your expanding agenda and increased workload are not only a testament to the world’s failures to uphold human rights; they are also a mark of your importance.’

In addition to expressing support for the role and work of the Council itself, she also underscored her strong belief in the importance of strengthening the position of the human rights pillar in a reformed United Nations. ‘Human rights express the core purpose of the UN: we can only attain peace, security and sustainable development for all societies when we advance the dignity and equality of all human beings […] The new reforms underway at the UN present an opportunity to advocate, as powerfully as we can, that a human rights approach be at the centre of the work of our UN partners.’

In particular, in order to strengthen the effectiveness of the Council, and of the interconnectedness of the three pillars of the UN, the new High Commissioner urged progress in three interconnected areas: national implementation of international human rights obligations and commitments; the contribution of human rights to the 2030 Agenda and the SDGs; and the UN’s prevention agenda.

On the first point, she called on all actors, including her Office, States, independent experts, NHRIs, parliaments, civil society and development actors, to ‘push forward together with the implementation of States’ [human rights] commitments.’ ‘Norms and laws are vital, but they must be applied. I am convinced that by building up national institutions, we can ensure powerful constituencies for rights, which can contribute to making rights real.’ As a key driver of the global ‘implementation agenda,’ the High Commissioner urged States and others to focus their attention on the development of mechanisms and tools at national level to coordinate the implementation, in an integrated manner, of ‘the recommendations of the Treaty Bodies, the Special Procedures and UPR,’ including with the support of ‘UN Country Teams and other actors.’

Strengthened domestic implementation will in turn contribute to both sustainable development and the prevention of violations and crises.

Regarding the former, she noted that ‘the 2030 Agenda […] opens a tremendous opportunity for greater integration of human rights goals, including the recommendations of the human rights mechanisms, into national policies and the work of the UN.’ Quite simply, in the view of Ms Bachelet, real progress with the achievement of the SDGs will not be possible unless States make progress in ‘the so-called sensitive area of human rights.’

Regarding prevention, the new High Commissioner drew attention to the important role of the Council, in cooperation with her Office and other relevant parts of the UN system, in building the human rights resilience of societies (to prevent violations from happening in the first place), and in responding promptly to emerging crises.

Making an analogy with human health, she reflected that: ‘Good doctoring is based on building resilience: strengthening healing processes and intervening to interrupt symptoms of pathology […] Human rights are a powerful medicine, which help heal wounds and develop resilience [of societies,]’ so that they are ‘more able to resist unpredictable shocks.’

With this in mind: ‘The Covenants, the seven other core human rights treaties, and the recommendations of all UN human rights bodies and experts, are fundamental contributions to the work of preventing, mitigating and ending human rights violations – including the inequalities and discriminations which torment so many of our fellow human beings.’

Where this ‘primary prevention’ fails, she called on the Council, with the support of her Office, to ‘build new strategies and stronger tools for prevention, early intervention and also accountability. I firmly believe that the power of justice can deter and prevent even the worst violations and crimes.’