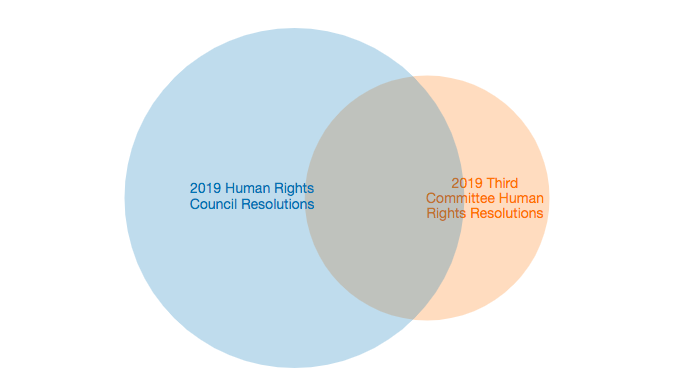 In recent years many have begun to take a closer look to the relationship between the Human Rights Council and the Third Committee of the General Assembly. As we near the end of 2019 now is an apt time to review the work done by both bodies this year and the level of efficiency achieved. Do these two key human rights bodies form a coherent whole, with each playing a clearly-defined and logical role in the overall UN human rights system? Or is the relationship more characterised by incoherence, duplication and contradiction? One way of answering such questions is to look at the degree of overlap between resolutions adopted by the Council and those adopted, in the same calendar year, by the Third Committee.

With this in mind, the Universal Rights Group (URG) has conducted a comparative analysis of the texts adopted this year in the two bodies. The methodology used for this assessment was the same as that employed for previous comparative analyses of the Council and the Third Committee covering the years 2017 and 2018.

The basic finding of the 2019 analysis is that there remains significant overlap and even duplication between the resolutions of the two bodies. 60% of Third Committee human rights resolutions in 2019 had a prima facie equivalent (judging by the resolution titles) adopted by the Council the same year. When looking closer at the actual content of these resolutions we concluded that 2.5% were functionally identical (same content), 7% elaborated upon corresponding Council texts, and around 5% had significant overlap. In total, therefore, 14.5% of Third Committee human rights texts in 2019 had a high degree of overlap/duplication with corresponding Council texts. If one adds those texts that displayed a lesser degree of overlap (though some overlap – i.e. more than 10% of content the same), the proportion jumps to 48.5%.

When compared to the same analysis, which URG undertook for resolutions adopted in 2018, we find a marginal improvement in reducing unnecessary duplication between the bodies. In 2018, 8% of texts were functionally identical, 8% elaborated on corresponding Council texts, and 5% had significant overlap. Overall, therefore, 21% of Third Committee human rights texts had a high degree of overlap/duplication with corresponding Council texts (compared to 14.5% in 2019). If one adds those texts with some degree of lesser overlap, the figure rose to 66% in 2018 (compared to 48.5% this year).

Given that a large number of resolutions in 2019 were biennial it is also worth looking at URG’s analysis from 2017. In 2017, 50% of resolutions had a prima facie equivalent as compared to 60% in 2019, a 10% jump. However, when we look at the substantive paragraphs we see an improvement in duplication. In 2017 6% of human rights resolutions were functionally identical, 6% were elaborated upon, and 4% contained significant overlap. Overall, 16% of all human rights resolutions in 2017 had a high degree of overlap, as compared to 14.5% in 2019. If one compares the amount of texts that displayed a lesser degree of overlap (though some overlap – i.e. more than 10% of content the same), we see 55% overlap in 2017 as compared to 48.5% in 2019.

Overall, therefore, compared to previous years, in 2019 the Third Committee adopted a lower proportion of resolutions with a high degree of overlap with corresponding Council texts (14.5%) than in previous years. Additionally, if one includes texts with some degree of overlap, 2019 was better (in terms of duplication – 48.5%) than 2018 (66%) and 2017 (56%).

While we saw an improvement in the level of duplication in the substantive paragraphs of the resolutions, we did see a rise in the number of prima facie duplication, rising from 54% in 2018 to 60% in 2019. This is likely in part due to one new resolution at the Third Committee: International Equal Pay Day . Additionally, for some of these prima facie resolutions, we saw that, in both places, the two resolutions discuss the same general topic but one focuses on a specific aspect of the topic and the other takes a broader view. For example, at the GA the resolution is titled ‘The rights of the child’, but the Council resolution focuses specifically on the ‘Rights of the Child: empowering children with disabilities for the enjoyment of their human rights, including through inclusive education’. While both resolutions discuss aspects of the rights of the child, such as violence against children and access to education, the resolution at the HRC focuses on these rights as they relate specifically to children with disabilities.

It is still worth questioning what this duplication achieves? As we examine the efficacy of the human rights bodies, especially when it comes to the relationship between Geneva and New York, this duplication (and the other high levels of duplication identified by URG) is worth addressing. There have been arguments made for and against duplication. One could argue, for example, that some key issues are worth discussing at both the Council and the Third Committee. On the other hand, the high number of resolutions at the Third Committee makes it difficult for States to engage constructively with every resolution and topic. With the upcoming 2021-2026 review of the Human Rights Council by the General Assembly, it is worth considering not only the efficiency and impact of the Council, but the relationship between the two bodies.

Another tell-tale sign of the level of coherence in the Council-Third Committee relationship is how the latter deals with the annual report of the former. In that regard, 2019 was a positive year as there was no attempt to ‘reopen’ the report of the Council. However, while it was ultimately adopted, the report was put to a vote. While it was adopted, some States criticised or refused to recognise country-specific resolutions passed by the Council. In addition, the usual argument was made by many States that instead of the Third Committee passing a blanket resolution on the Human Rights Council report, the report of the Human Rights Council should be considered in the plenary of the General Assembly and that the Third Committee should only consider, and when applicable take action on, the recommendations in the report.

For more detail on resolutions passed by the Third Committee in 2019, see URG NYC’s Post-Session Report.

For more detail on resolutions passed by the Human Rights Council in 2019, see URG’s Post-Session Reports and see yourHRC’s End of Year Report