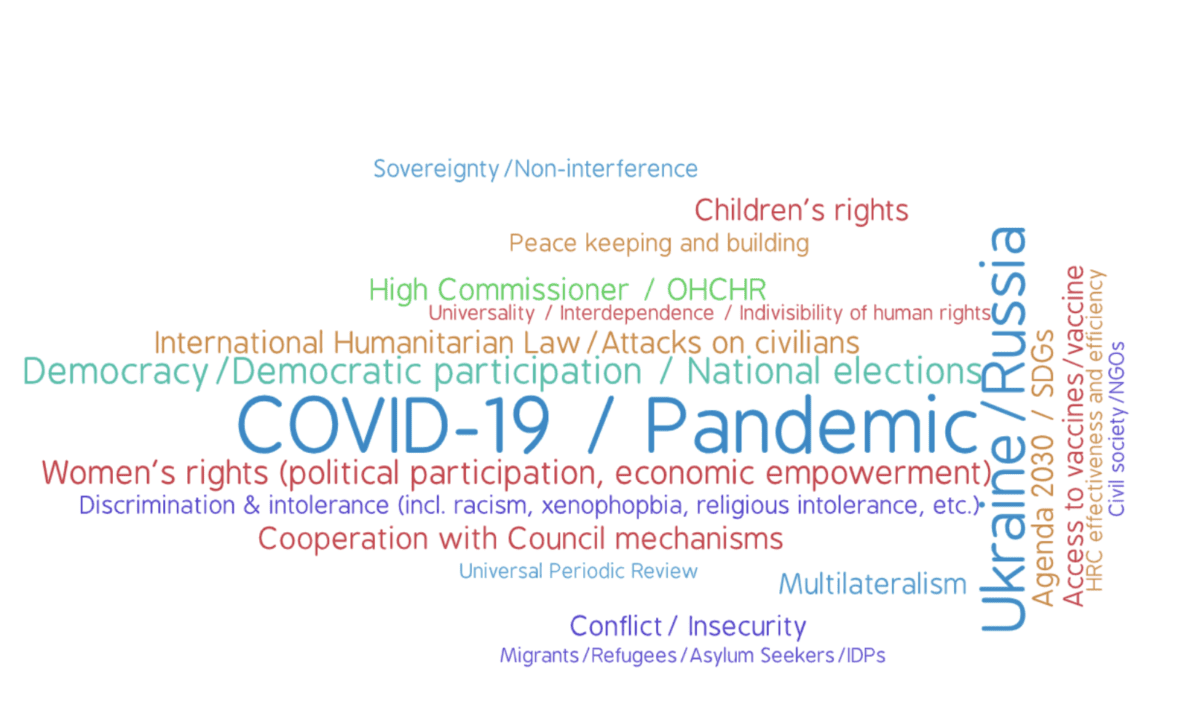 The High-Level Segment of the 49th session of the Human Rights Council, held from February 28 to March 3 2022, saw the active participation of more than 120 world leaders, including six heads or deputy heads of State, five heads or deputy heads of Government, and 107 ministers or vice-ministers. In the statements delivered to the Council, they addressed both domestic human rights concerns, developments and achievements, as well as their countries international priorities in the human rights sphere for 2022 and beyond. As such, the participation of High-Level representatives presented an opportunity to assess the level of attention and prioritisation given by various States to specific human rights topics and areas of concern.

The Universal Rights Group (URG) has analysed the content of over 120 statements made by State representatives, to identify the key human rights themes, debates, situations of concern, and priorities for 2022. The results of this analysis are presented below in a number of ‘word clouds’, where the size of the word reflects the total number of mentions of the relevant topic/situation. URG has identified a total of 104 topics that were highlighted by at least four different State Representatives during the High-Level Segment. These topics were grouped in six different categories and URG has generated individual word clouds for each of them. The categories are as follows: institutional topics related to the UN human rights bodies and mechanisms; civil and political rights; economic, social and cultural rights; groups in focus; country or regional situations; and cross-cutting themes. In addition, URG identified the ‘top 20’ most frequently mentioned themes across all categories, which is represented in the first word cloud. 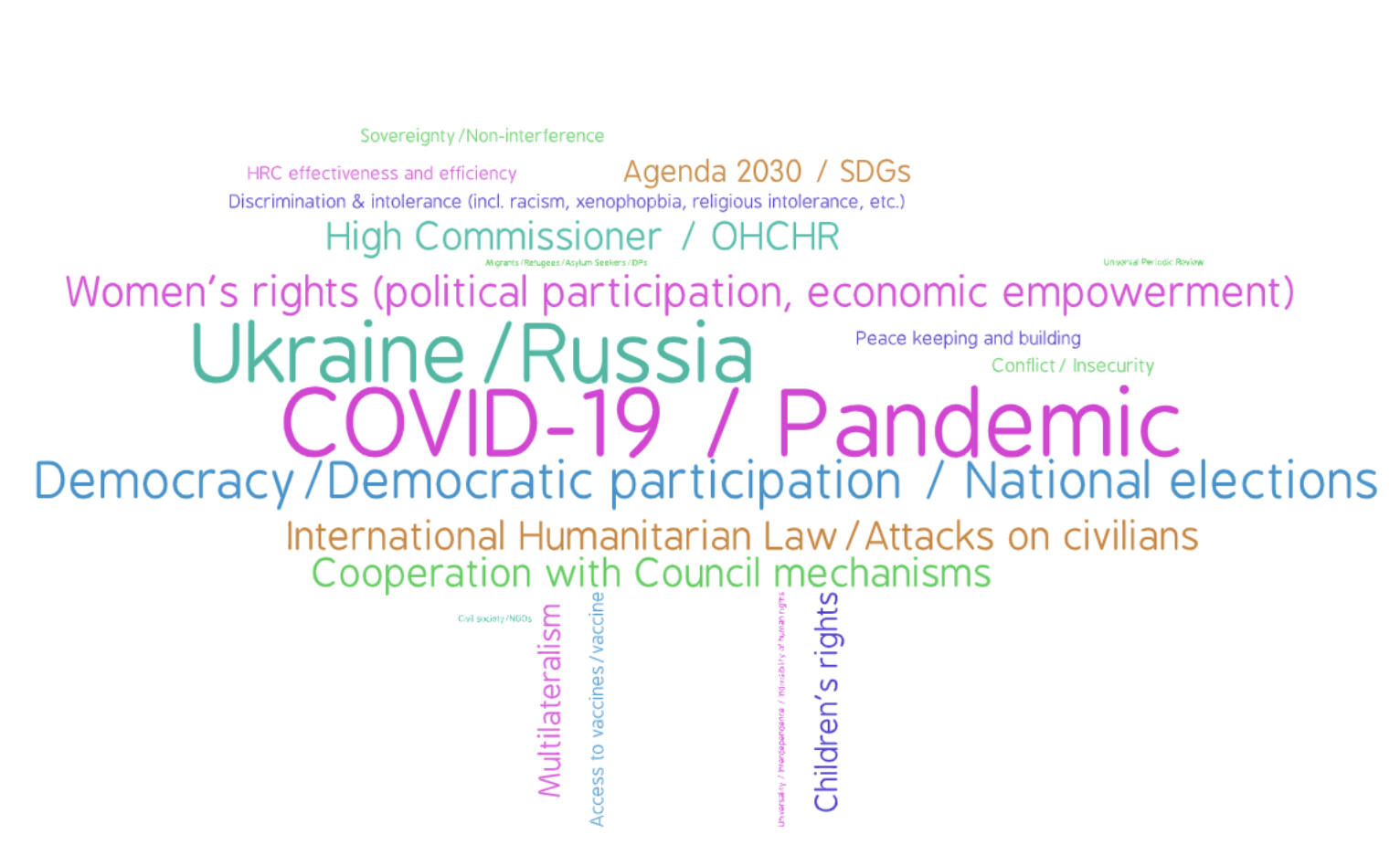 Cross-cutting and ‘other’ issues 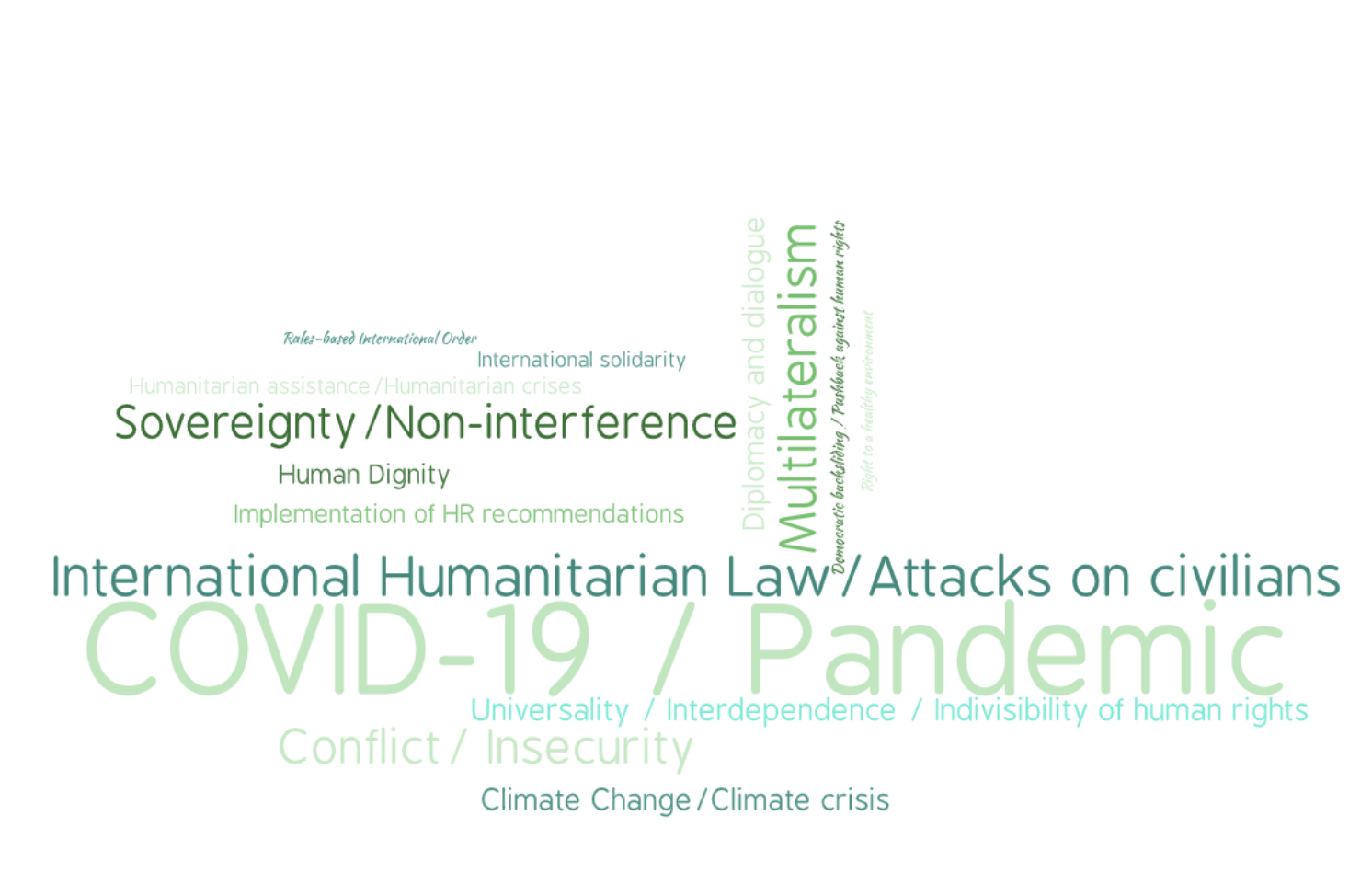 Looking at cross-cutting/horizontal human rights concerns, there was an overwhelming focus on the COVID-19 pandemic and its effects on human rights. States consistently underlined that a strengthened commitment to multilateralism and multilateral cooperation was needed more than ever due to the current of conflicts. Respect for International Humanitarian Law and the territorial integrity and sovereignty of other States was also central to the discussions. States reminded the international community that human rights are universal, interdependent and indivisible. 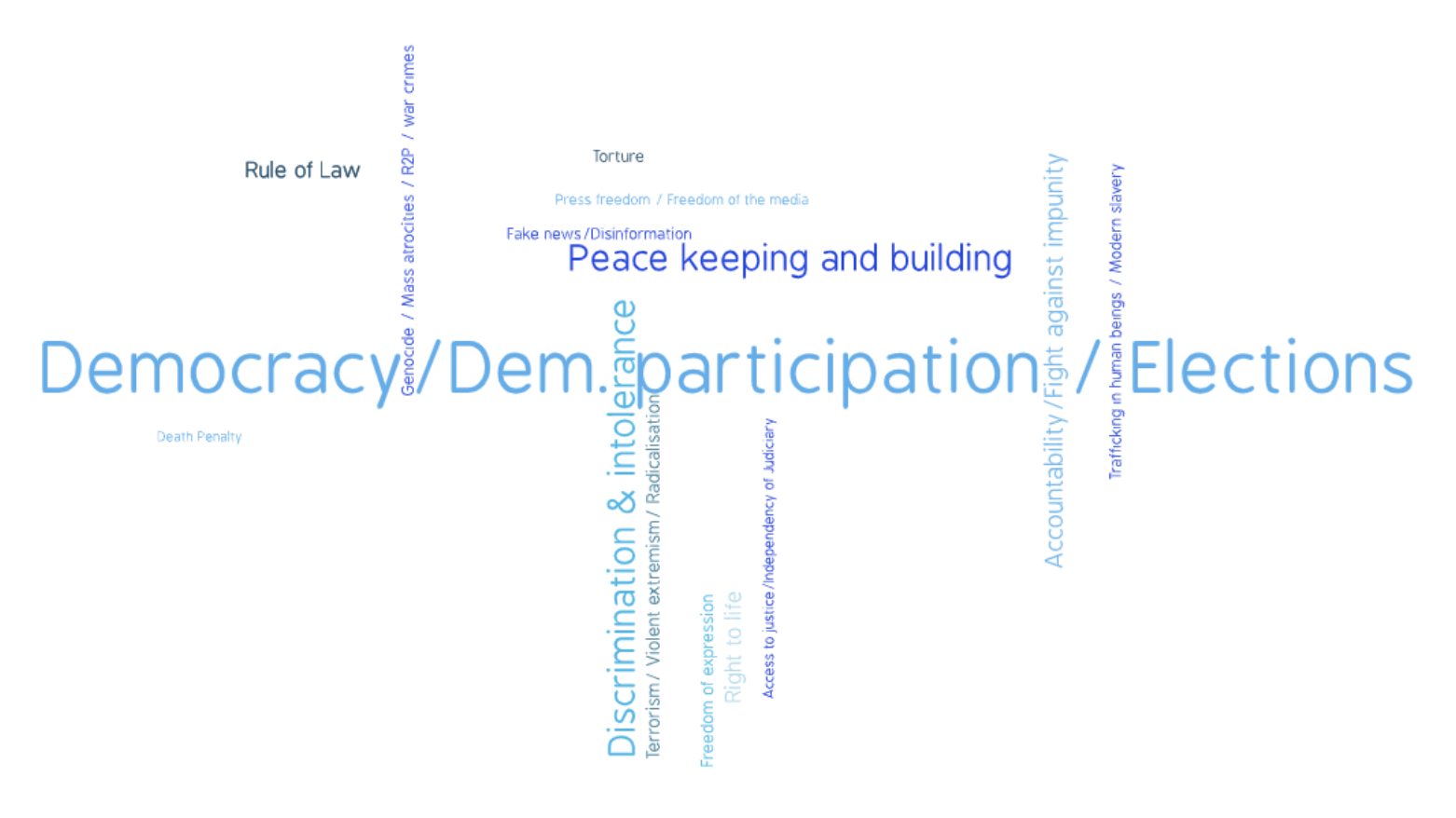 With regards to civil and political rights, a majority of dignitaries highlighted the importance of the theme of democracy and shared their good practices and advancements on democratic participation and elections. States also raised concern over the rising number of instances of discrimination, intolerance and inclusion, including racism, xenophopbia, and religious intolerance. States also regularly underlined the urgency of moving towards peacekeeping and building and issued calls to end hostilities and hold perpetrators accountable for human rights violations. Another topic that received considerable attention was the importance of rule of law. 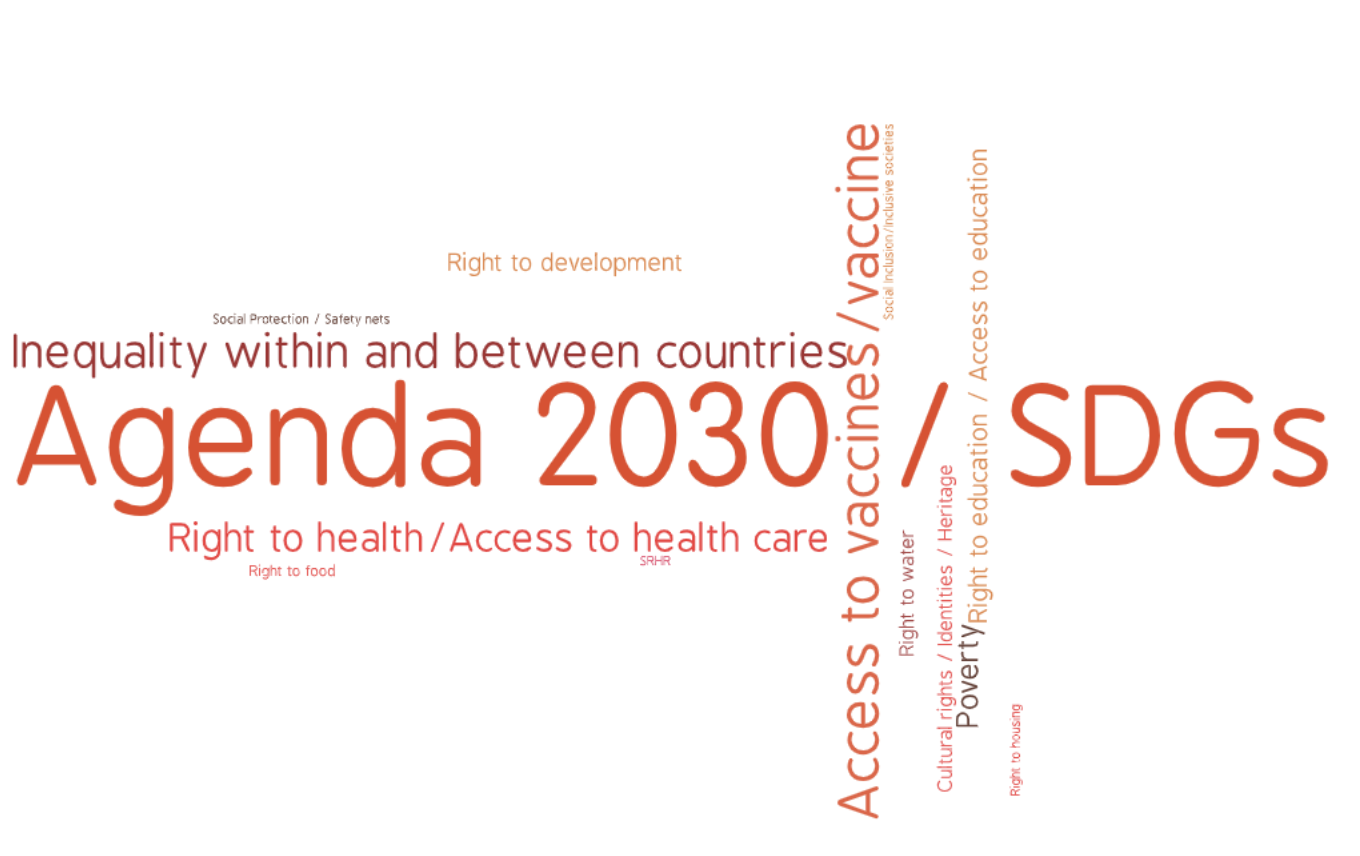 In the area of economic, social and cultural rights, States reiterated their commitment to further the cause of social development and implement the 2030 Agenda for Sustainable Development. Likewise, a majority of States highlighted that equitable access to vaccines and healthcare was a global imperative. Other themes widely mentioned include poverty, the right to education and cultural rights. As many States pointed out, the pandemic and conflicts deepen the poverty gap and deprive children from education. With regards to cultural rights, the protection of cultural heritage, identity and multiculturalism was raised by a number of States. 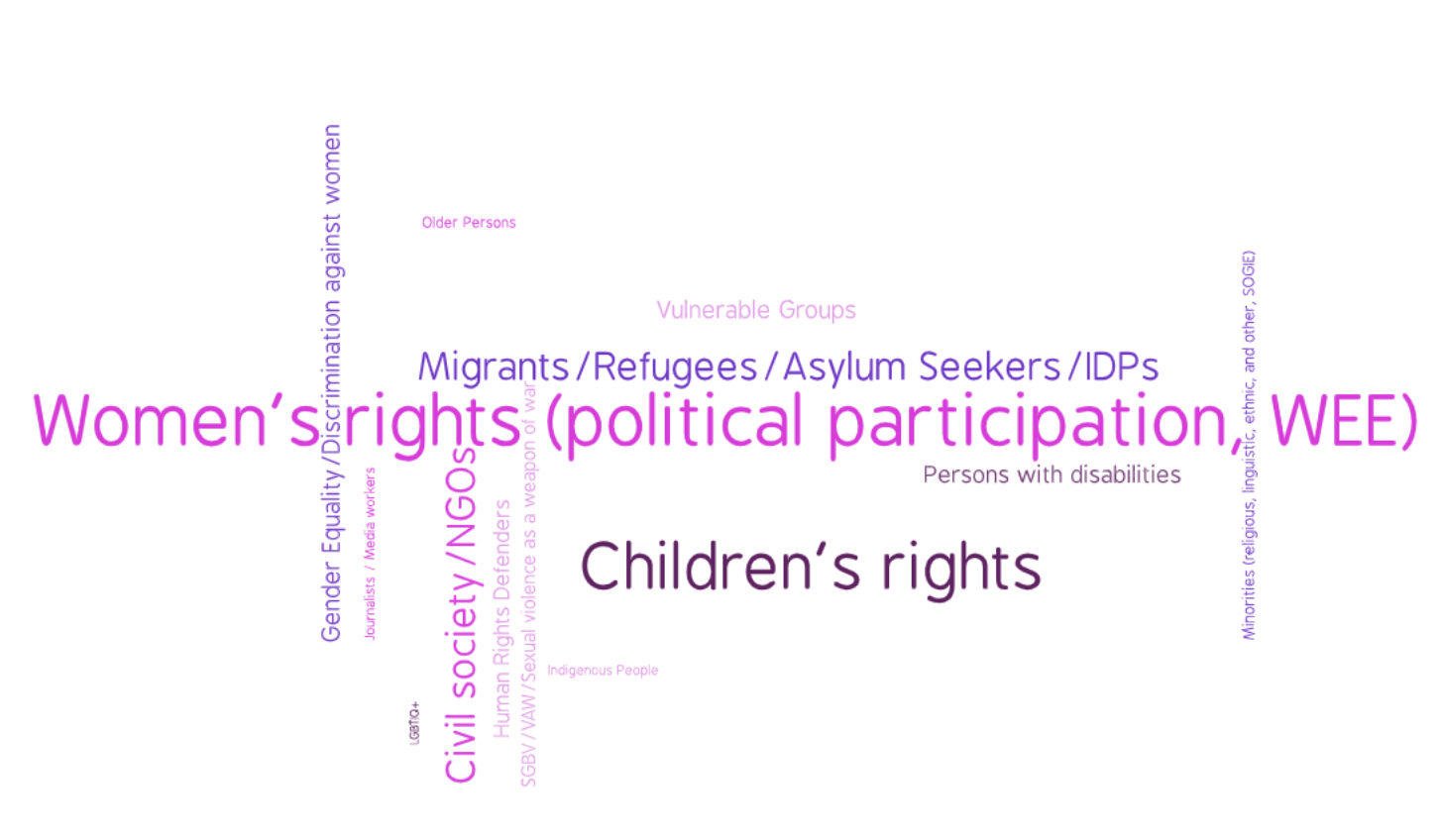 In the category of groups in focus or groups in vulnerable situations, the HRC49 High Level Segment saw an emphasis on women’s rights and children’s rights, as both groups particularly suffered disproportionately the effects of the pandemic. The role of women and girls in conflict and post-conflict situations also received specific attention. Moreover, States repeatedly highlighted the efforts of civil society in the promotion and protection of human rights, regularly expressing concern at the increased crackdown on civil society, particularly in countries such as Belarus and Russia. Moreover, many representatives acknowledged how situations of conflict, violence and instability had increased the influx of internally displaced persons and refugees in an alarming way. 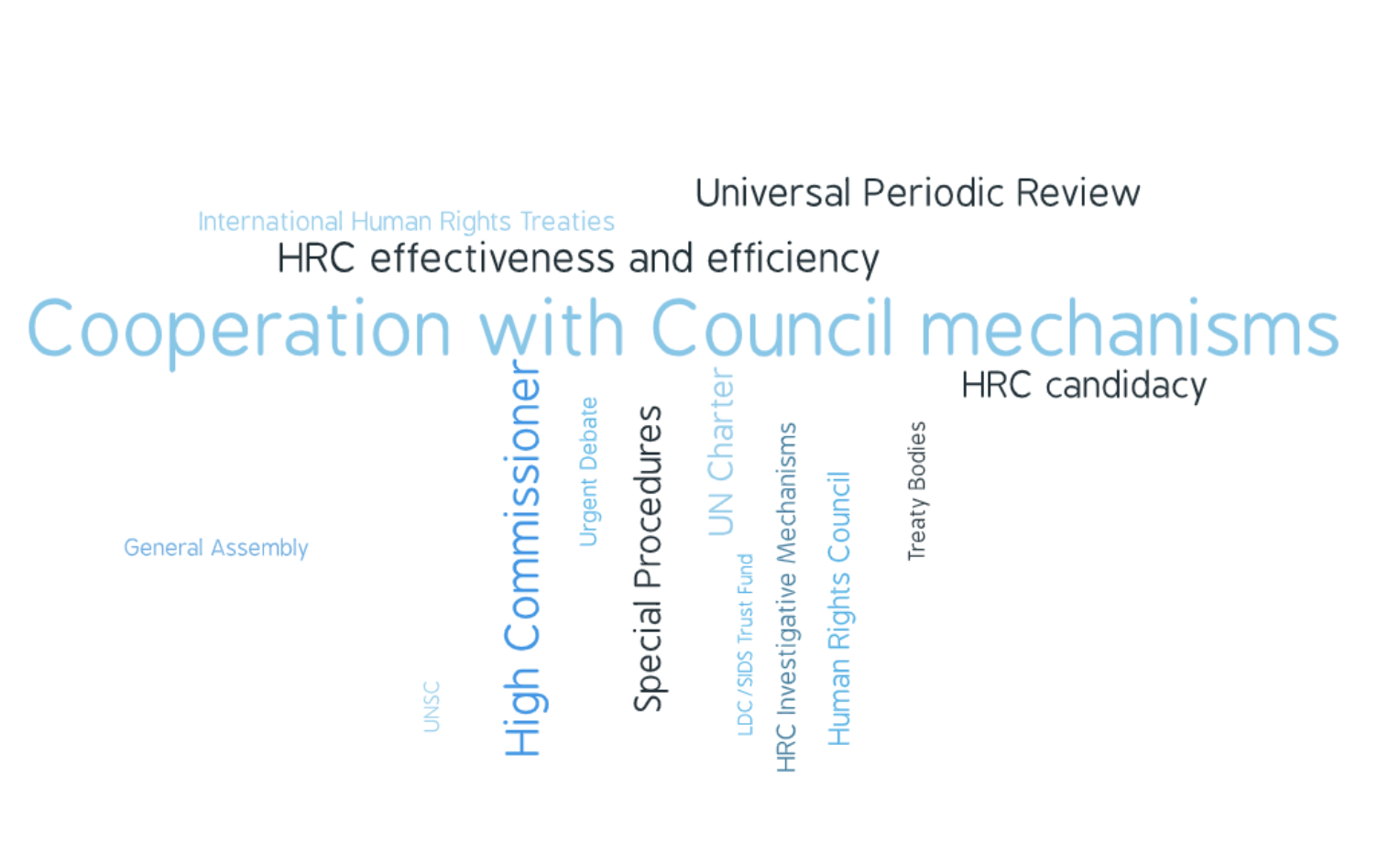 Turning to UN institutions and mechanisms, the majority of States reiterated their support and willingness to cooperate with the Human Rights Council’s mechanisms as well as with the Office of the High Commissioner, underlying their invaluable work. The Universal Periodic Review was highlighted by a high number of representatives as a central mechanism for the protection and promotion of human rights. Many States also announced during the HLS their upcoming candidacy for a seat on the Council. 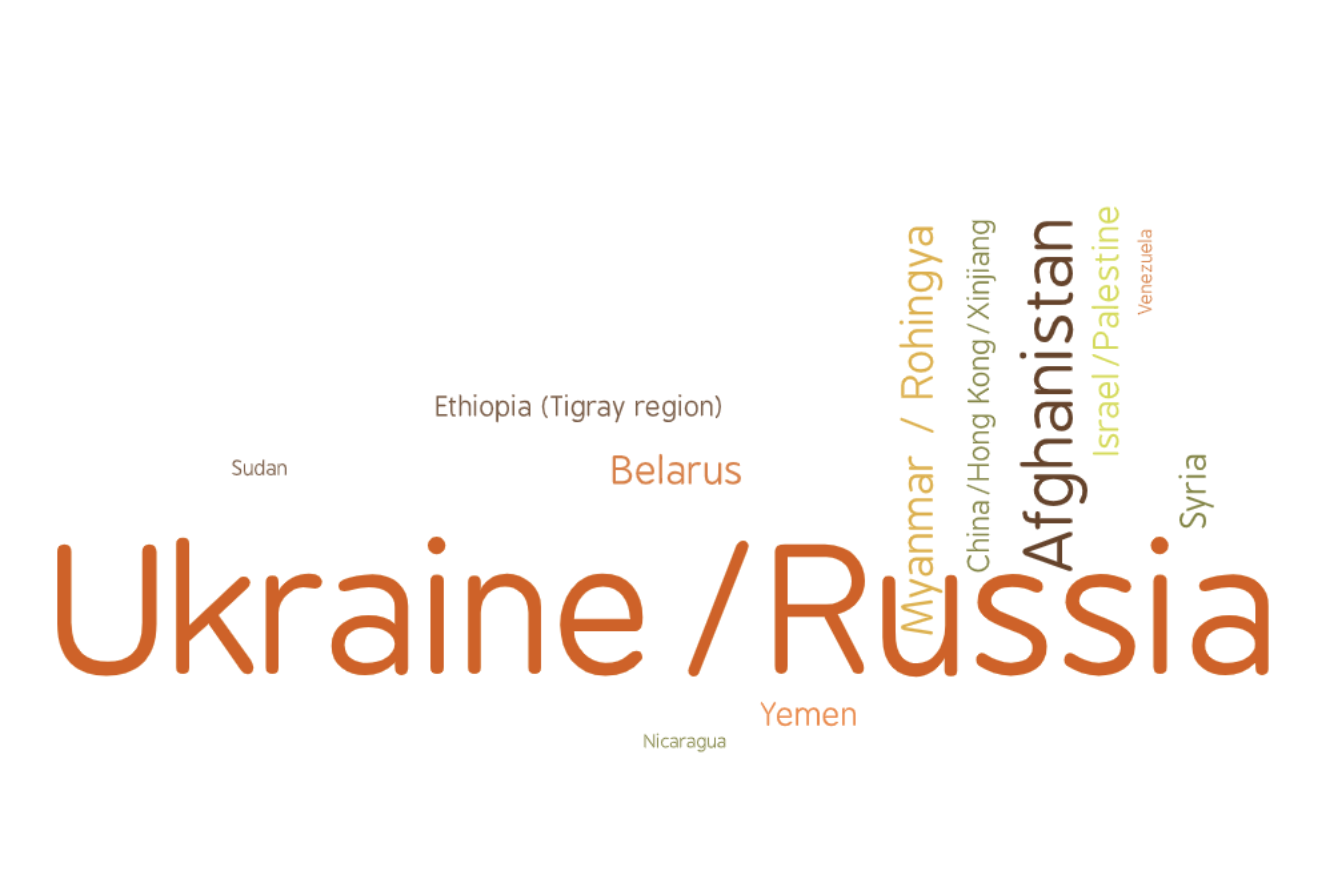 With regards to country or regional situations, the 2022 HLS was dominated by the situation of human rights in Ukraine stemming from the Russian Federation’s military invasion. State dignitaries condemned Russia’s invasion as an act of aggression, a breach of Ukraine’s sovereignty and territorial integrity, a violation of international law, and an attack against global stability and security. While the focus was principally on the war in Ukraine, States reminded that the international community cannot forget other situations where human rights are violated and abused, including Afghanistan, Myanmar, Belarus, Syria or Occupied Palestinian Territories.