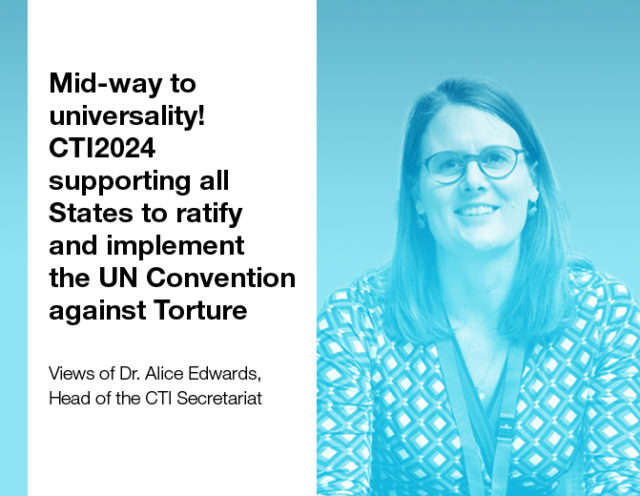 Guiding States on how to prevent and respond to torturous forms of abuse of power or position is what the UN Convention against Torture is all about. Yet, despite torture being long condemned and the prohibition recognised as a jus cogens international norm, there continue to be grave abuses perpetrated in many countries and in all regions. In others, lack of safeguards or systems can lead to incidents, and if not guarded against, could spiral into patterns of unacceptable behaviour. No State or region is immune from such excesses; and all States have something to learn and share about how best to prevent and respond to such incidents.

The persistence of the torture problem is why initially five, now six, governments have lent their names to and staked their reputations on a unique inter-governmental initiative – the Convention against Torture Initiative or @cti2024.org. CTI aspires to reach universal ratification and effective implementation of the Convention, by 2024. The CTI – as an initiative for States – operates through international cooperation, diplomacy, and provides technical and capacity-building support to States. The six Core States are Chile, Denmark, Fiji (joined in February 2019), Ghana, Indonesia and Morocco.

As highlighted in a Joint Statement of the CTI Core States during HRC40, as a 10-year endeavour CTI2024 has reached its mid-way point. In the years remaining, the CTI Core States are committed to increasing awareness of the benefits of the Convention, of sharing good State practices, as well as strengthening our institutional engagement with government ministries.

Helpfully, the UN Convention against Torture offers a practical framework for institutional, legislative and executive measures that can guard against such practices, and respond should such incidents or patterns arise. That’s why UNCAT is not only a moral treaty, but arguably the most practical of the human rights treaties, steering States – step-by-step – on how to achieve peaceful, just and sustainable communities and countries.

CTI works with States on the implementation of UNCAT both prior and posterior to ratification. A lot of progress has been made in the past 5 years, not least 12 new ratifications; over 140 governments attending CTI regional events and seminars; and more than 80 good State practices reflected in CTI’s implementation tools. There is a positive spirit building.

So what have we learned so far?

First, as an initiative of and for States, there is great merit in cross-regional human rights leadership in which mutual respect and equality between States are the guiding principles. CTI’s working methodology of soft diplomacy (“no name, no shame”) is paying dividends. At a minimum, it opens the door to discussing the sensitive topics of torture and ill-treatment which can be off-limits in other settings. At a maximum, it has led government decision-makers to see the benefits of ratification and implementation of the Convention who have consequently shown leadership and taken decisions to reform their existing practices.

Second, there is strategic advantage in holding intra-regional discussions, which bring together groups of States that share legal traditions, practical similarities and friendship. This peer-to-peer format helps exchange on good practices that are more easily transferable to similar settings. CTI makes the case why ratification and implementation of UNCAT can bring domestic benefits, not from theory but from the direct experiences of other countries. It is also clear that momentum is building across many regions with some open to a healthy dose of competition; no State wants to be the last one to ratify!

The third lesson is that platitudes do not work, we need to offer alternative practices. CTI is conscious that if governments want to change behaviour or mindsets, they need their police and other officials to be offered alternatives that work in practice. We have been collaborating, for example, with the Norwegian police on sharing the good experience of humane investigative interviewing techniques to help move investigators away from coercion, manipulation or physical or psychological abuse in extracting confessions or information. This is a win-win for everyone: such practices protect police from false allegations, suspects are more likely to receive a fair judicial outcome, and the public can rely on their institutions that the right person has been prosecuted. All of CTI’s implementation tools – covering a range of thematic areas – similarly share good State practices in an accessible at-a-glance way.

Fourth, as the large majority of States yet to ratify are SIDS and LDCs, CTI is supporting States to not only see the benefits of joining the global movement, but also offers technical advice and support. The Core States are conscious not only of the benefits of ratifying this treaty, but also the challenges that all States face in implementing it, and the need for technical and capacity building support. Through the anti-torture expertise in the CTI Secretariat, and drawing on CTI’s State friends and partners, a package of support is available for interested States. For example, a number of States have participated in CTI’s study visits in Geneva, to learn about the Convention and to observe a session of the UN Committee against Torture; other States have received CTI diplomatic and/or technical delegations to their countries, to meet with decision-makers and other stakeholders or to advise or host national consultations or seminars on the same. CTI’s “help desk” responds, confidentially, to government queries on a wide range of issues: info@cti2024.org.

Fifth and finally, the Universal Periodic Review is a key calendar point for the CTI and provides a rallying moment for interest in the UN Convention against Torture. Notably, of the top recommendations during the first and second cycles, ratification of UNCAT and implementation of torture-related themes were in the top 5 recommendations made by States to other States. Along with other criteria, CTI sees the UPR as providing a guide to political intent to ratify. The UPR has also proven to be a good opportunity to meet with visiting delegations while they are in Geneva and discuss how the Initiative can assist them in fulfilling their UPR voluntary commitments.

CTI is the only initiative of its kind in the world – where a core group of countries from strategic regions have established a human rights initiative, with a full-time secretariat to help them deliver an annual programme of activities, and with ambitious quantifiable targets. The six Core States, along with the over 40 governments in the CTI Group of Friends, are to be lauded for trying to achieve the ultimate goals of effective implementation and the first international human rights treaty with universal participation! In the words of the founding five States at the launch of the CTI at the Human Rights Council in 2014:

“We want, once and for all, to remove torture from the toolkit of terror and oppression and to put an end to the profound traumas and societal wounds caused by this violent practice. We invite all Governments to join us over the next decade to achieve universal ratification and to put the Convention against Torture into concrete practice.”

The Convention against Torture Initiative or CTI2024 is comprised of the Governments of Chile, Denmark, Fiji,* Ghana, Indonesia and Morocco and supported by a full-time Secretariat, based in Geneva.

The Association for the Prevention of Torture (APT) is a strategic partner of the CTI, collaborating and advising the CTI on its activities.

The CTI’s Group of Friends is a network for the exchange of knowledge, experience and ideas regarding how best to overcome obstacles to ratification or implementation of UNCAT, and is engaged in the CTI through participation in annual meetings and events in Geneva and New York. The Group of Friends is open to all UN Member States, with invited participation from international organisations, NGOs and independent experts.