Looking ahead to the Paris Climate Change Conference (COP21): what would heightened ambition mean for global human rights?

On 10th June the Universal Rights Group, together with the Climate Vulnerable Forum and the Government of Costa Rica organised an event to present and build on a Joint Statement (Friday 5 June) by UN Special Procedures drawing attention to the CVF-commissioned report on climate change and human rights submitted to the UNFCCC ahead of the UN Climate Change Conference at Bonn, Germany (1-12 June 2015)

The URG-CVF event, with Costa Rica as host, brought together leading states involved in the UN Human Rights Council and the UN climate change negotiations (UNFCCC) alongside experts on international environmental law in an event co-organized with the mandate of the UN Special Rapporteur for human rights and the environment. The participants discussed how human rights ties to the 2 degrees temperature goal, which COP21 must decide whether to retain or reinforce in December, emphasising that more ambitious outcomes from the Paris negotiations would promote greater enjoyment of fundamental human rights.

Leading the discussions, the representative of Costa Rica as host stated that: “Paris is a tremendous opportunity for the international community to reinforce the enjoyment of a wide range of fundamental human rights that are already being affected by the impact of climate change. COP21 provides us a unique chance to step up the global response to the historic challenge of climate change. Greater ambition in Paris, by strengthening the 2 degrees goal, would strengthen the protection of human rights globally.”

The declaration is supported by the report prepared by John Knox, Special Rapporteur for human rights and the environment, on “The Effects of Climate Change on the Full Enjoyment of Human Rights”. The report highlights the adverse implications of the current international 2 degrees goal and was submitted as a formal input to the UNFCCC just prior to the Bonn session by the Climate Vulnerable Forum. It is being currently discussed in Bonn in the context of the periodic review of the adequacy of the 2 degrees goal.

For Professor Knox: “Even a two degree increase in temperature would have a grave effect on the enjoyment of a wide range of human rights, including rights to life and health, and make it more difficult for countries to fulfill their obligations under international law to protect human rights from harm.”

“COP21 in Paris is one of the most important human rights conferences ever held. The UN has repeatedly recognized that climate change has serious negative implications for a range of internationally-protected human rights, especially for people living in already vulnerable situations. An ambitious Paris agreement therefore has the potential to make a major contribution to the full enjoyment of human rights for billions of people around the world, as well as for future generations. Failure to check global warming, on the other hand, will consign a large proportion of the population to a more difficult and dangerous future” added Executive Director of Universal Rights Group, Mr. Marc Limon.

The meeting also spotlighted the February 2015 “Geneva Pledge for Human Rights in Climate Action”, which has been adopted by 20 states and represents a commitment to ensure that the UNFCCC and climate change policies are informed by human rights perspectives. The UN Special Procedures report on climate change and human rights represents a first initiative by States to ensure formal consideration of human rights in the context of a key UNFCCC decision.

The Effects of Climate Change on the Full Enjoyment of Human Rights (Report, Special Procedures of the UN Human Rights Council, 30 April 2015) 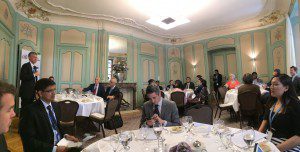