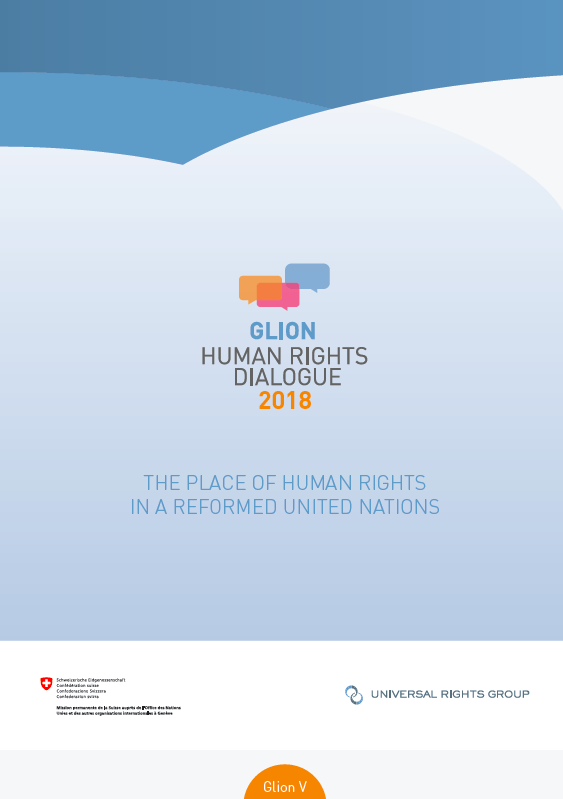 The Glion V retreat and its preparatory policy dialogues, looked at the human rights implications of the on-going UN reform process, launched in 2017 by the Secretary-General, António Guterres; and the parallel efforts of the Human Rights Council to strengthen its efficiency and effectiveness.

By seeking to understand where and how the human rights pillar fits within the Secretary-General’s proposed reforms, and also the implications of those reforms for the promotion and protection of human rights around the world, Glion V sought to support the Secretary-General’s efforts, and to contribute to the realisation of key objectives, including, inter alia: securing greater UN system-wide coherence, a heightened focus on prevention, and coherent support for the implementation of the 2030 Agenda for Sustainable Development.

The Glion Human Rights Dialogues, hosted by the Government of  Switzerland with the support of the Universal Rights Groups aims to provide a platform for representatives of States, OHCHR, the wider UN, and other key parts of the human rights system such as Special Procedure mandate-holders, members of Treaty Bodies, NHRIs, NGOs, and human rights defenders, to offer their assessment of the key challenges they face and their vision of how to best overcome them to strengthen the Council and the wider UN human rights system. As always, the outcome of the retreat, and the three policy dialogues held in preparation for the meeting, will be summarised in an informal document presenting some of the key messages, ideas and recommendations, which will seek to encourage and contribute to wider consideration of the issues.

On 5th September 2018, the Government of Switzerland, supported by the Universal Rights Group, hosted a reception to mark the launch of the informal report of the fifth Glion Human Rights Dialogue.

13h05         Welcome and presentation of the Glion V report by H.E. Mr Valentin Zellweger, Ambassador and Permanent Representative of Switzerland