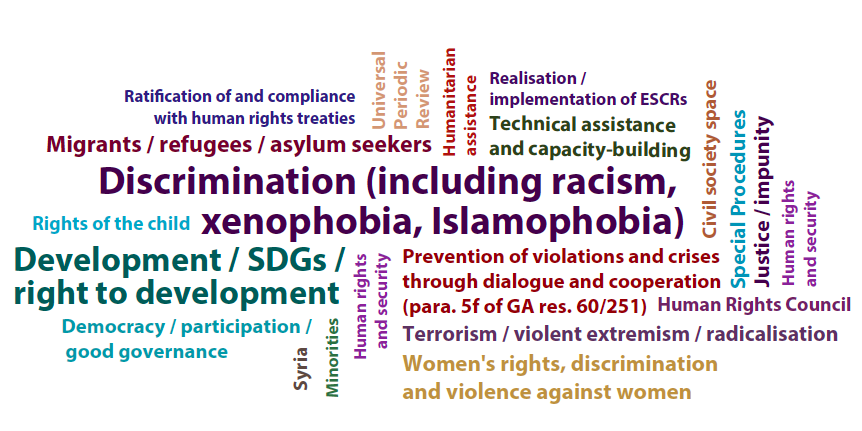 ‘Discrimination’ (racism, xenophobia and religious intolerance); ‘human rights, the Sustainable Development Goals and the right to development;’ the rights of migrants and refugees; prevention; the ‘Implementation Agenda;’ violent extremism, radicalisation and terrorism; and women’s rights; among most frequently referenced subjects during 2017 high-level segment of the Human Rights Council

High-level segments (HLS) of the UN Human Rights Council (Council), held each year during the first week of the Council’s main session in March, have their detractors. Critics argue, not without some justification, that the political speeches by assorted presidents and ministers present an otherworldly picture of the situation of human rights around the world, detached from reality and premised mainly on giving governments a public relations fillip on a global stage.

While such arguments may contain some truth, one way in which Council high-level segments certainly are useful is in offering a barometer of international interest in human rights, and international commitment to the Council and the wider UN human rights pillar. This can be roughly gaged by the number and the level of high-level speakers travelling to Geneva. A second, and more significant way in which HLSs can be useful is by offering a snapshot of what world governments see as the key human rights challenges, opportunities, and priorities for the international community in the year ahead.

With regard to the first point, the high-level segment of the 34th session of the Council (HRC34), which ran from 27th February to 1st March, saw the participation of over 130 high-level State dignitaries, including 2 heads of State, 61 ministers and 32 vice ministers. That such a large number of senior State representatives would take the time to travel to the Palais des Nations and deliver speeches, suggests that governments continue to see the body as an important part of the international political architecture, and that they continue to see value in using it as a platform to present their national position and views on human rights.

On the second point, in order to use the content of those speeches to provide a snapshot of what world governments see as human rights priorities for the year ahead, URG monitored and analysed all 134 high-level statements during HRC34 to identify key themes and ideas presented by State representatives.

To identify key themes for 2017, URG counted the number of mentions of those broad themes across all high-level speeches (only themes mentioned by at least four different State representatives were included in the final results).

The results of the analysis are presented below in a series of ‘word clouds’ (with the size of the word reflecting the total number of mentions of the relevant theme). URG has generated word clouds for: economic, social and cultural rights themes; civil and political rights themes; ‘groups in focus’; cross-cutting/other topics; country or regional situations; and ‘institutional’ themes related to the UN human rights mechanisms. Finally, URG identified the ‘top 20’ most frequently mentioned themes. These are presented in a separate word cloud. 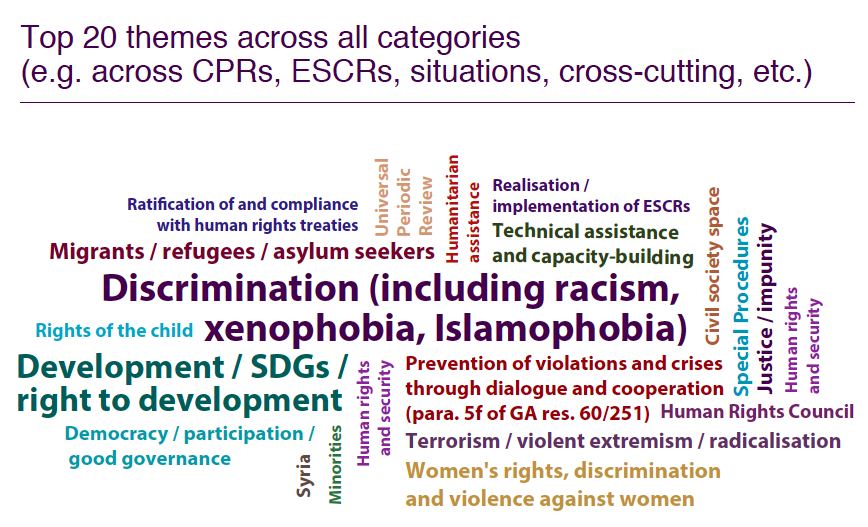 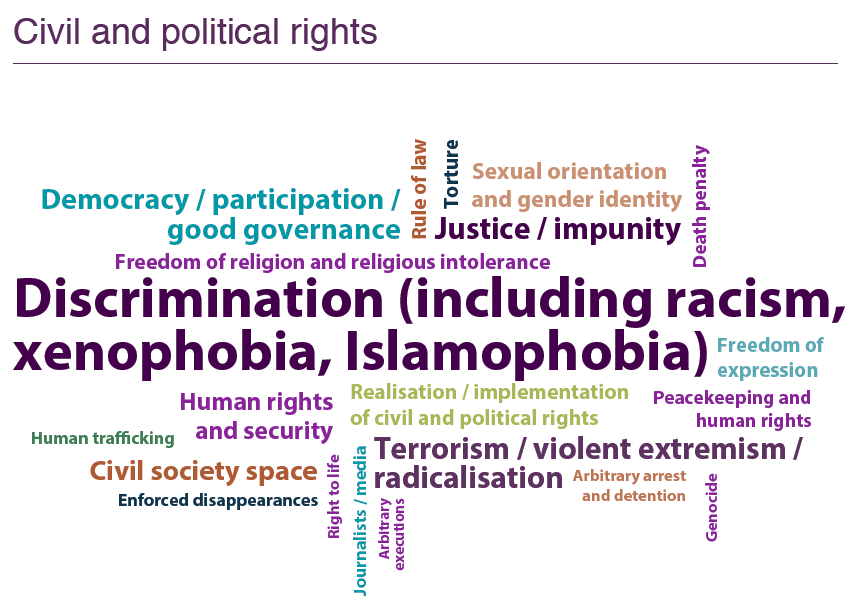 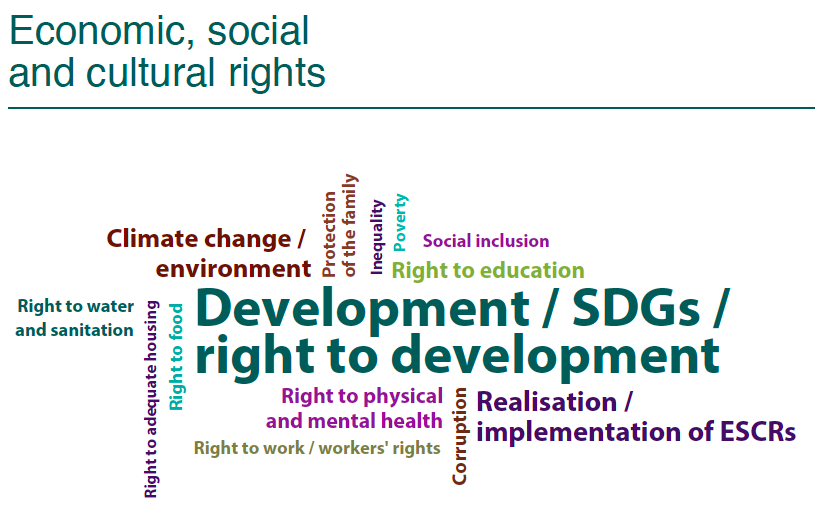 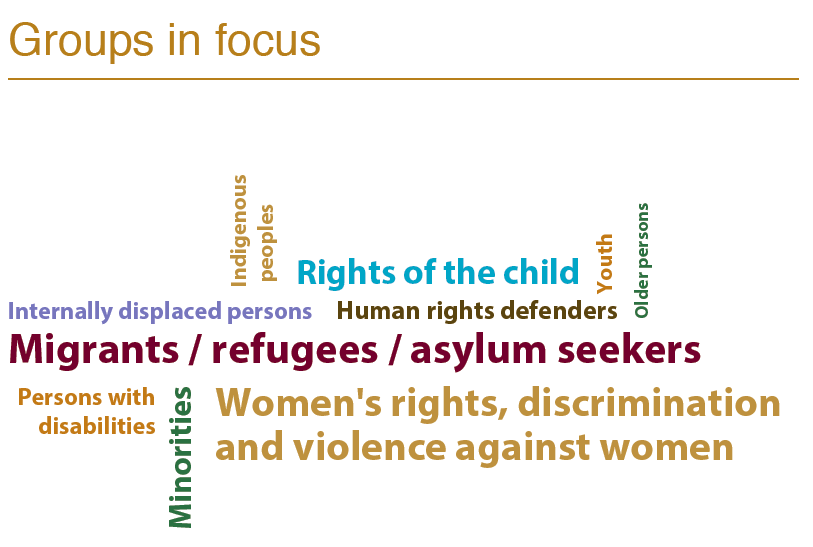 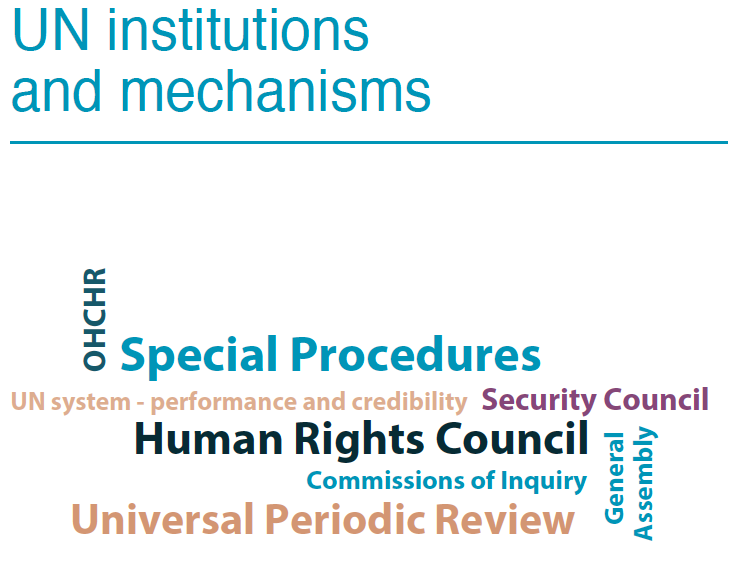 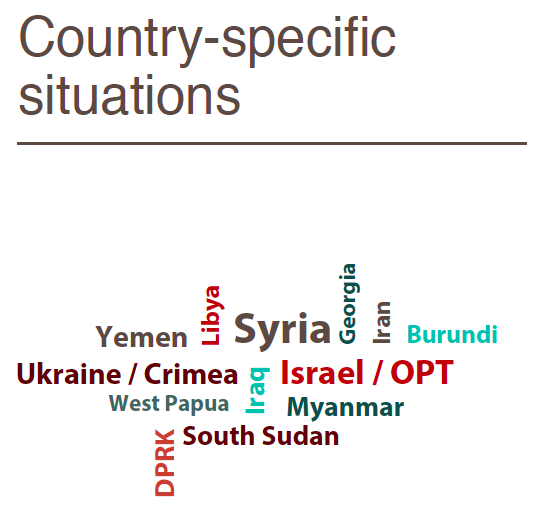