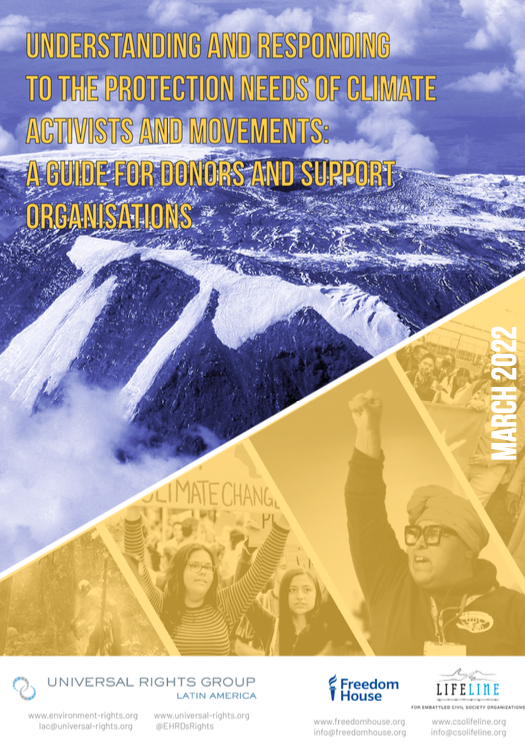 As climate change impacts our everyday lives, livelihoods, and ecosystems, significantly harming the world’s most vulnerable populations, thousands of individuals and groups have raised their voices to call upon world leaders, the private sector, and the public to take bold action to protect the planet and its people. They have formed a heterogeneous and diverse global movement that has been growing in numbers and relevance as the urgency to tackle climate change increases.

Unfortunately, as the movement and its influence at national and international levels grows, so do the risks faced by those on the frontlines of climate defence. Adversaries of climate activism are increasingly trying to silence the voices of these brave defenders through different means, from restrictive laws to judicial harassment to physical violence.

In addition to these targeted attacks, climate activists often face a wide range of obstacles that affect their activism, integrity, security, and wellbeing, including political, cultural and economic marginalisation, insufficient resources, and inadequate access to information. In response, there have been a range of interventions to help climate activists confront these situations.

In recent years, however, activists and civil society organisations have warned of a gap preventing communication between those who identify as climate activists and the organisations working to support them and provide protection services, including as part of efforts to support human rights and environmental defenders. This gap limits efforts to strengthen the protection of fundamental freedoms and civic space, which is essential for all those working to defend a healthy planet and combat climate change.

Against this backdrop, this brief seeks to contribute to addressing the above-mentioned gap by identifying concrete ways in which civil society organisations and donors who are dedicated to supporting human rights defenders, including those specifically oriented toward environmental human rights defenders (EHRDs), can more effectively connect, communicate, and provide support to address the particular needs of climate activists and movements.