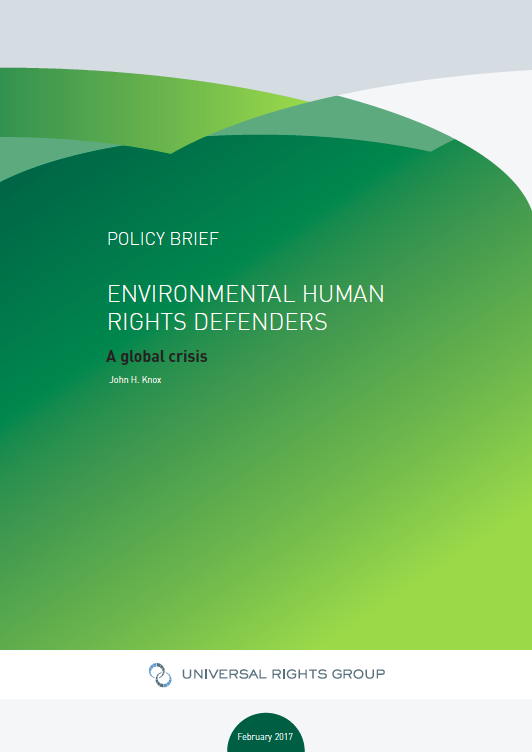 John H. Knox, Special Rapporteur on the human rights and the environment

“Unless the international community strengthens its support for, and improves its protection of, environmental human rights defenders, the full enjoyment of human rights and the realisation of the 2030 Sustainable Development Goals will be impossible…”

While many aspects of the relationship between human rights and the environment are important, none is more urgent than the need to protect those individuals who work, often at great personal risk, to protect their natural environment from unsustainable exploitation, and defend the human rights of themselves and their communities.

Without these dedicated individuals, the protection of the environment and of the rights that depend upon it would be impossible.

Reporting from the front line of environmental protection around the world, the threats facing EHRDs are perilous and increasing.

Less than three years ago, Global Witness conducted the first comprehensive review of the number of killings of EHRDs around the world. Going back to the beginning of 2002, and covering cases through to the end of 2013, it found that at least 908 people had been killed as a result of protecting their rights to land and the environment. More than 90% of recorded deaths occurred in only nine countries.

Moreover, the crisis appears to be rapidly growing. Global Witness reported that ‘three times as many people were killed in 2012 than 10 years previously, with the death rate rising in the past four years to an average of two activists a week.’

While some of this increase may have been due to better reporting, it seems likely that the problem is worsening in large part because ‘competition for access to natural resources is intensifying against a backdrop of extreme global inequality,’ while ‘more and more ordinary people are finding themselves on the frontline of the battle to defend their environment from corporate or State abuse, and from unsustainable exploitation.’

Shocking as these numbers may be, they are, in themselves, an inadequate means of conveying the scale and nature of the challenges and risks faced by EHRDs.

For one thing, data on the number of killings tells us nothing about the myriad other human rights violations suffered by EHRDs. Killings may be ‘the most acute and measurable end of a range of threats’ to EHRDs, but for every EHRD murdered, many more, in every region of the world, are subjected to other types of violence or harassment, designed to instil fear and prevent activism.

Most importantly, behind the above-mentioned statistics, behind each of those numbers, is a face – a person killed merely for trying to assert their rights and protect their environment, and a person whose loss continues to be felt by their family, their community and their cause.

URG, Global Witness, N1M and other NGOs, in collaboration with the UN Special Rapporteur on human rights and environment, have come together to begin the development of such a portal. When completed, this new resource will be available at the following web address: www.environment-rights.org.