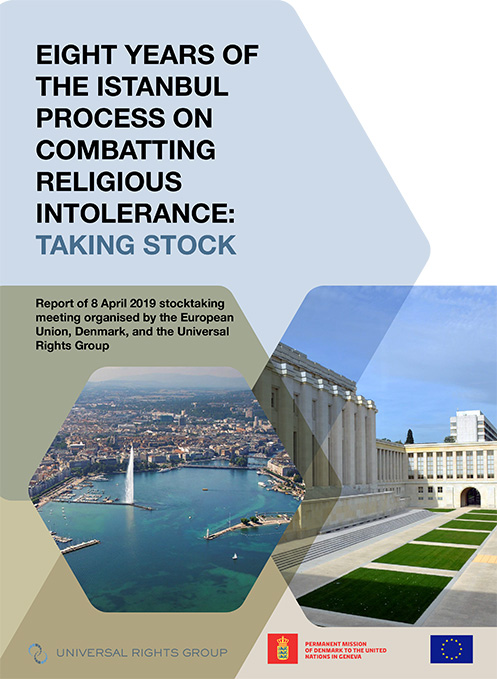 European Union, Denmark and the URG

The main intergovernmental policy framework for combatting religious intolerance, stigmatisation, discrimination, incitement to violence and violence against persons based on religion or belief is set down in Human Rights Council (Council) resolution 16/18 and its sister resolution at the General Assembly (GA) – GA resolution 66/167. Resolutions 16/18 and 66/167 were adopted by consensus in 2011, and hailed by stakeholders from all regions and faiths as an important step forward in international efforts to confront religious intolerance. The inclusion of an explicit plan of action to combat religious intolerance in the operative paragraphs of these resolutions (as well as in later iterations of the texts) is key to understanding their value and continued relevance. What is more, States had the foresight to also put in place a dedicated mechanism of implementation for the action plan: the ‘Istanbul Process.’

Since the launch of the Process in Istanbul, Turkey in July 2011, there have been six expert-level meetings: in Washington (US), London (UK and Canada), Geneva (OIC), Doha (Qatar), Jeddah (OIC), and Singapore. More than eight years after the adoption of resolution 16/18 and against a worrying backdrop of heightened religious intolerance worldwide (including rising Islamaphobia, anti-Semitism and attacks against Christian minorities), maintaining consensus around the ‘16/18 framework’ is of the utmost importance.

However, that consensus remains fragile.

On 8 April 2019, the Danish Mission to the UN Office at Geneva, the EU Delegation, and the Universal Rights Group (URG) organised an Istanbul Process ‘stocktaking exercise.’ The meeting brought together around 120 government representatives, UN Special Procedures, UN officials, religious leaders and civil society representatives, and sought to, inter alia:

More broadly, the meeting aimed to help re-invigorate the Istanbul Process, given that there had not been a meeting since 2016, and to demonstrate that all States, including from the West, continue to support and value resolutions 16/18 and 66/167 and their implementation. The stocktaking meeting also aimed to provide a positive space for States, parliamentarians, NGOs and religious leaders to exchange good practice ‘case studies’ on the implementation of the 16/18 action plan. Those case studies suggest that the action plan and the Istanbul Process are having a real impact on the ground – they are changing the way in which governments and other stakeholders understand the problem of religious intolerance as well as how to combat it. This supports evidence gathered through the six meetings of the Istanbul Process, which shows that a growing number of countries (in the West, the OIC, and across Latin America, Africa, Asia and Eastern Europe) are reforming domestic laws and practices in line with the 16/18 action plan and the Rabat Plan of Action.

The present report provides a short summary of the main outcomes of the meeting.