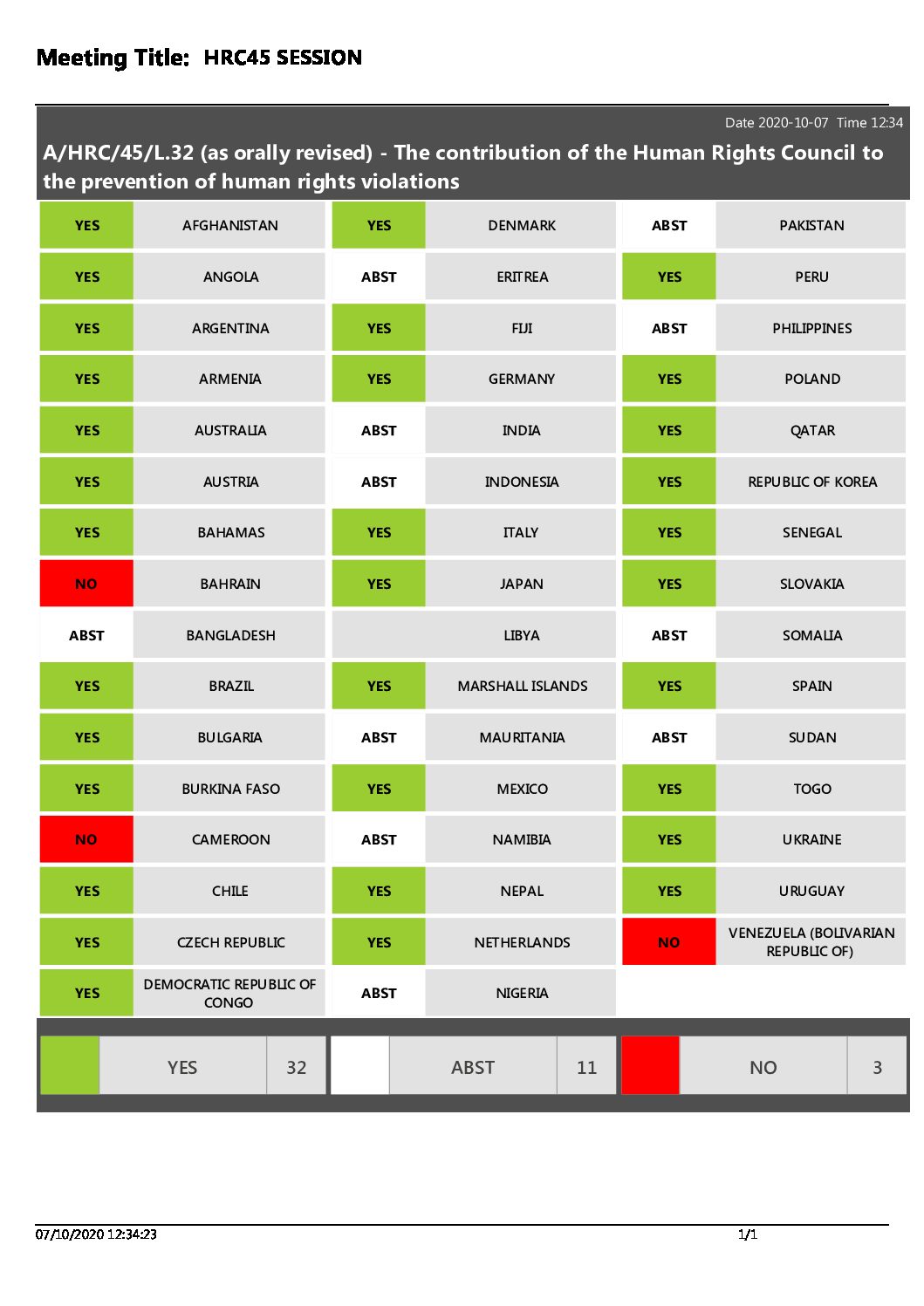 The Universal Rights Group (URG) welcomes today’s passage of an important new Human Rights Council resolution on the prevention of human rights violations and emergencies. The resolution, led by Norway, Sierra Leone, Switzerland and Uruguay, was adopted by vote at the 45th session of the Council with 32 in favour, 11 abstentions and 3 against (Bahrain, Cameroon and Venezuela).

The resolution covers all aspects of the Council’s hitherto unused prevention mandate, as provided by the UN General Assembly with its resolution 60/251 (and specifically paragraph 5f thereof), covering both primary (or ‘upstream’) prevention, and secondary prevention (early warning and early engagement). The resolution also strengthens the Council’s ability to connect with the other pillars of the UN (the development, and security pillars) by calling on the Secretary-General to share relevant Human Rights Council reports relevant to prevention in specific contexts with other UN bodies (e.g. the Security Council), and by inviting the head of the Peacebuilding Commission to brief the Council on an annual basis.

Preventing violations from occurring in the first place means, in essence, working with all States, through cooperation and dialogue, to build national human rights capacity and resilience. The Council is – in principle – perfectly placed to play a central role in this area, both in its own regard but also in conjunction with the 2030 Agenda and the on-going reform of the UN’s development system.

The key to fulfilling the Council’s primary prevention role will be to better follow-up on and support the national implementation of States’ international human rights obligations and commitments. In addition to a greater focus on the global human rights ‘implementation agenda,’ this will require fresh thinking about how to create a ‘safe space’ for cooperation and dialogue under item 10 of the Council’s agenda (on technical assistance and capacity-building).

Within such a space, States should be encouraged to voluntarily provide information on progress with the implementation of UN human rights recommendations, identify implementation- or resilience-gaps, and then request (and have a chance of receiving) technical assistance and capacity-building support (from UN agencies and programmes, and bilateral donors) to help address those vulnerabilities. In line with GA resolution 60/251, this process must take place at the request of, and in cooperation with, the country concerned.

With this in mind, the new resolution requests the Secretary-General to conduct a system-wide assessment of current levels of, and financing for, the delivery of technical assistance and capacity building, and to provide proposals for the scaling up of that assistance in the future.

Regarding early warning and early engagement, the resolution puts in place new processes and mechanisms premised on identifying and responding promptly to emerging patterns of violations, on encouraging cooperation and dialogue with the concerned State as well as regional (and sub-regional) organisation(s), and on securing and building trust to prevent a worsening of the situation.

In particular, it puts in place the following four systems/mechanisms to allow the UN human rights pillar is to effectively fulfil its secondary prevention mandate:

“The resolution adopted today with the overwhelming support of Council members, has the potential to transform the way the Council addresses human rights violations – moving the body from a predominantly reactive to a preventative approach. The Human Rights Council is, according to its mandate and powers, the UN’s principal ‘Prevention Council,’ and this resolution will finally allow it to play that role to the full, both in its own regard and in combination with the other two pillars of the UN.”