Article 13 of the Charter of the United Nations tasks the General Assembly, among other responsibilities, with ‘assisting in the realization of human rights and fundamental freedoms for all without distinction as to race, sex, language, or religion.’ This is the mandate of the Social, Humanitarian and Cultural (Third) Committee of the United Nations General Assembly.

Following a decision by heads of states and governments during the 2005 World Summit, the Human Rights Council (HRC) was created as a subsidiary body of the General Assembly in resolution 60/251. The mandate, expertise and focus of the HRC are assets in the Third Committee’s work towards meeting its responsibilities laid out by the Charter of the United Nations.

Over the eight years and twenty-seven regular sessions of its existence, the HRC has adopted a total of 762 texts, addressing all human rights themes and different situations across the world. However, the evolution of the HRC resolution system has come with its own set of challenges, including, amongst others, the overlap between the work of the HRC and the Third Committee. This overlap raises serious questions about the optimal use of time and resources, taking into account that the UN regular budget allocation for human rights remains stuck below 3%, with clear implications for the resources available to implement resolutions.

The Universal Rights Group has published a major new policy report offering an analysis of these challenges. The report seeks to answer the question of whether the quantitative expansion of the Council’s output since 2006 has been matched by a strengthening of its impact on the on-the-ground enjoyment of human rights, and, linked with this, also seeks to understand its relation with the Third Committee of the United Nations General Assembly.

It is hoped that the report and its findings will help contribute to wider consideration of these issues, for example in the context of recent cross-regional statements on the Council’s methods of work, the December statement by the new Council President on Council effectiveness and efficiency, and discussions on the Council’s relevance and impact taking place in the context of the body’s upcoming 10th anniversary.

With this in mind, the Permanent Mission of the Kingdom of Morocco to the UN, in collaboration with the Universal Rights Group, organised a panel discussion on Monday, 20 April 2015, in the UN headquarters in New York, with the objective of considering the above issues and contributing to finding consensual ways forward.

The event, which was attended by around a hundred Government officials, UN experts as well as civil society representatives, offered participants the opportunity to engage in an interactive dialogue with H.E. Mr. Joachim Reucker, President of the Human Rights Council, H.E. Ms. Sofia Mesquita Borges, Chair of the Third Committee of the 69th session of the General Assembly, Ambassador May Elin Stener, Deputy Permanent Representative of Norway, Ms. Elena Kountouri Tapiero, Secretary of the Consultative Group of the Human Rights Council and Mr. Subhas Gujadhur, Director of the Universal Rights Group. The event was moderated by H.E. Mr. Omar Hilale, Ambassador and Permanent Representative of the Kingdom of Morocco.

During the discussions, all panelists noted the need to create more synergy between the Third Committee and the Human Rights Council so as their output have a greater impact on the ground. Cases of duplication of initiatives in both bodies by presenting functionally identical resolutions should be avoided. It is therefore necessary to create complementarity of initiatives which can create synergies between both bodies in advancing human rights. There is a need for a set of pragmatic and practical steps aimed at overcoming some of the challenges facing both bodies in terms of coherence and synergy while respecting the rules of procedures of the Third Committee and the institutional building text of the Human Rights Council.

As such, it was proposed to set up a group of countries representing all regions to have a reflection on these challenges in a non-politicised manner with the aim to come up with innovative ideas in addressing these challenges. 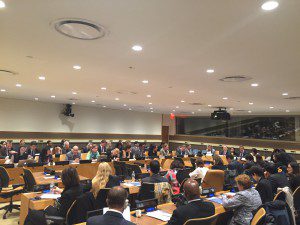