Asian launch of URG-EIU report on business and human rights

The Universal Rights Group (URG), in cooperation with the Centre for Rights and Justice at the Chinese University of Hong Kong and Mazars, last month helped launch the Economist Intelligence Unit’s (EIU) report on The road from principles to practice: today’s challenges for business in respecting human rights.

This was the first event organised by the URG in Asia, at its Hong Kong hub. URG’s Asia hub is located at the Chinese University of Hong Kong.

Ms Laurel West, Asia Director of the Thought Leadership Research team at EIU introduced the key findings of the EIU report, while CUHK’s Professor Mimi Zou focused on a the cluster of human rights which 93 per cent of respondents considered to be relevant to their businesses: conditions of employment and work

As an expert on international employment law and former consultant to the International Labour Organization’s offices in Asia, Professor Zou posed the question of how businesses can move towards a ‘Race to the Top’ in the area of labour rights for the 1 billion workers in Asia. She argued that multinational businesses across different sectors have faced various challenges in addressing so-called ‘sweatshop’ working conditions in Asia, especially in the ever-growing complexity of global supply chains. In recent years, the tragedies of FoxConn worker suicides and the collapse of the Rana Plaza factory have illustrated the continued difficulties that multinational businesses face in their oversight of suppliers’ practices, especially where state governance is weak and local enforcement of laws is poor.

To move from principle to practice, Professor Zou highlighted a number of fundamental ILO rights at work that all businesses should respect. These include: workers’ freedom to associate and organise and their freedom to bargain collectively, the elimination of all forms of forced or compulsory labour, the effective abolition of child labour and the elimination of discrimination in respect of employment and occupation. Professor Zou also propose the need for workers to be involved in developing, shaping and implementing the human rights policies of businesses, which point to the importance of workplace dialogue and employee involvement in business decision-making across all levels.

The EIU report, which was launched in Geneva and London earlier this year, is based a global survey of 853 senior corporate executives and in-depth interviews with a range of experts conducted by EIU in November and December 2014. The respondents’ companies are geographically and sectorally diverse, and also varied in size and revenue. The report’s main findings of report are: 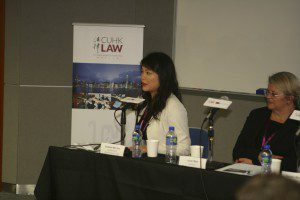