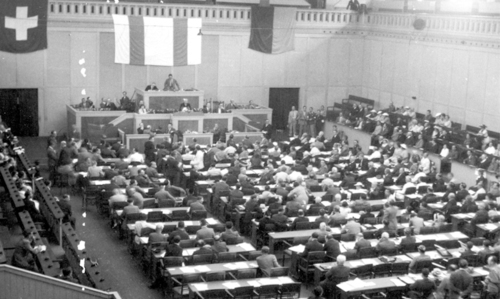 There is little doubt that one of the modern world’s principal political challenges is the rise of hate speech, particularly in the cyber arena. Such hateful and intolerant expression, especially when widely circulated via the internet, promotes populism, extremism and radicalisation and deplorably leads to violence and murderous attacks. This incitement tears societies apart, threatens democracy and the rule of law. No population group is immune to such hatred. In recent years, the combination of hate speech and the power and reach of online media platforms as well as social media, have created a toxic mix which the international community and the social media companies have only belatedly begun to address.

Historically, propagators of hate speech have used all possible means of transmission to spread their message: the Nazis used the printing press to dehumanise and spread lies about the Jews; the radio was used to label Tutsis as ‘cockroaches’ during the genocide in Rwanda; and more recently, regular inflammatory posts appeared online targeting the Rohingya community in Myanmar and ‘weaponizing’ social media. Online platforms have also been used to spread hateful messages against Christians, Muslims, Jews and other religious groups, as well as incite attacks against churches, mosques and synagogues in all regions of the world.

The World Jewish Congress (WJC) is no stranger to this challenge. Since its creation in Geneva in 1936, the WJC has prioritised universal respect of human rights, religious coexistence, education, interfaith relations, and the fight against racism. In that sense, its work is entangled with the history of Geneva and the development of the UN system. At the time of its establishment, the organization’s main focus was the rising Nazi threat and the persecution of the Jews in Europe. During the Second World War, WJC staff in Geneva worked hard to save endangered Jewish communities by organizing escape plans, producing and distributing fake passports, providing humanitarian assistance, circulating news, and coordinating rescue operations. During this period, the WJC was located at Palais Wilson, which had been left empty following the collapse of the League of Nations.

After the war, the WJC was one of the first NGOs to be given UN ‘consultative status’ (in 1947) and was very engaged in all efforts to build the UN human rights system. Its experts were important stakeholders in drafting the Universal Declaration of Human Rights (UDHR), the two International Covenants, and other human rights treaties. For example, amendments to article 26 of the UDHR on the right to education, calling for education that strengthens ‘respect for human rights and fundamental freedoms’ and that promotes ‘understanding, tolerance and friendship among all nations, racial or religious groups’, were made possible through the advocacy efforts of WJC delegates.[1] In addition, the WJC played an important role in advocating for, and shaping the content of, the Convention on the Elimination of Racial Discrimination (CERD), and the 1981 UN Declaration on the elimination of all forms of intolerance and discrimination based on religion and belief.[2]

Drawing on this long and distinguished legacy, the WJC has, in more recent years, been highly active in the field of combatting online hate. The WJC strongly supports freedom of speech and expression but is adamant in our position that the digital sphere should be a space free from radicalisation, hate and harassment. In 2016, the WJC released an unprecedented report analysing tens of millions of posts in 20 languages on Facebook, Twitter, YouTube, Instagram, blogs and other online forums. The research found that more than 382,000 antisemitic posts were uploaded to social media platforms over the course of 2016—an average of more than 43.6 posts per hour, or one post every 83 seconds.[3]

This study served as an important catalyst for productive discussions with governments and tech companies. Since then, the WJC has worked closely with online giants, including Facebook, YouTube and Twitter, in order to curb hate speech online, including through active monitoring, early warning, and early response systems. The WJC has also helped social media companies to develop tools, processes and standards to flag and remove offensive content. Although for the most part these companies have clear guidelines in place prohibiting certain language or material from being promoted on their sites, content in violation of these standards continues to abound. The WJC’s policy discussions with these companies has focused on adapting their policies to better deal with online hate, with a particular focus on antisemitism. In addition to cooperation on their internal policies, WJC is also working with social media companies to improve enforcement, and to address topics such as Holocaust denial.

While there is a clear onus on social media companies to improve their standards and enforcement, governments also have an important role to play. WJC works with governments to promote adequate legislation, regulation and enforcement efforts to combat the spread of online hate, as well as to deal with the underlying intolerance that is being manifested online through the platforms. We have seen that where governments have taken strong positions on this issue, social media companies have been pushed to act as well. The WJC believes that where social media companies flout national laws against the spread of hate speech and calls to violence online, they should be sanctioned.

We are also working with government authorities to deal with the ‘dark web’ and those platforms that do not uphold basic human rights standards as they relate to hate speech. This is where the majority of online extremism currently manifests itself and where such toxic ideas reach those amendable to such content. WJC also uses its wide reach on social media to actively counter hate speech, and to create a more positive online environment for all.

Last, but not least, at the UN, WJC has continued its proud tradition of bringing these issues to the attention of the international community (e.g. via statements at the Human Rights Council) and contributing to effective international policy responses.

The WJC believes that it is the responsibility of governments, civil society, and the social media companies themselves to understand, recognise, and address the worrying rise in hate speech online.[4] Internet companies, in particular, have a clear responsibility to maintain high content standards, eliminate egregiously offensive material, and make the digital world a safer place for all. In light of the UN Secretary General’s Strategy and Plan of Action on Hate Speech, and Plan of Action to safeguard religious sites, the WJC has redoubled its efforts to cooperate with the UN and all governments around the globe to prioritise the elimination of hate from our societies, and to promote dialogue and understanding between all peoples.

Leon Saltiel is the Geneva Representative of the World Jewish Conference (WJC) and the project manager on countering antisemitism at the organisation. He co-authored this article with Yfat Barak-Cheney WJC’s director of international affairs.

[4] The recent report by the Special Rapporteur on the Promotion and Protection of the Right to Freedom of Opinion and Expression, David Kaye, A/74/486, available at https://www.ohchr.org/EN/NewsEvents/Pages/DisplayNews.aspx?NewsID=25174&LangID=E, could serve as a useful guide to this regard.