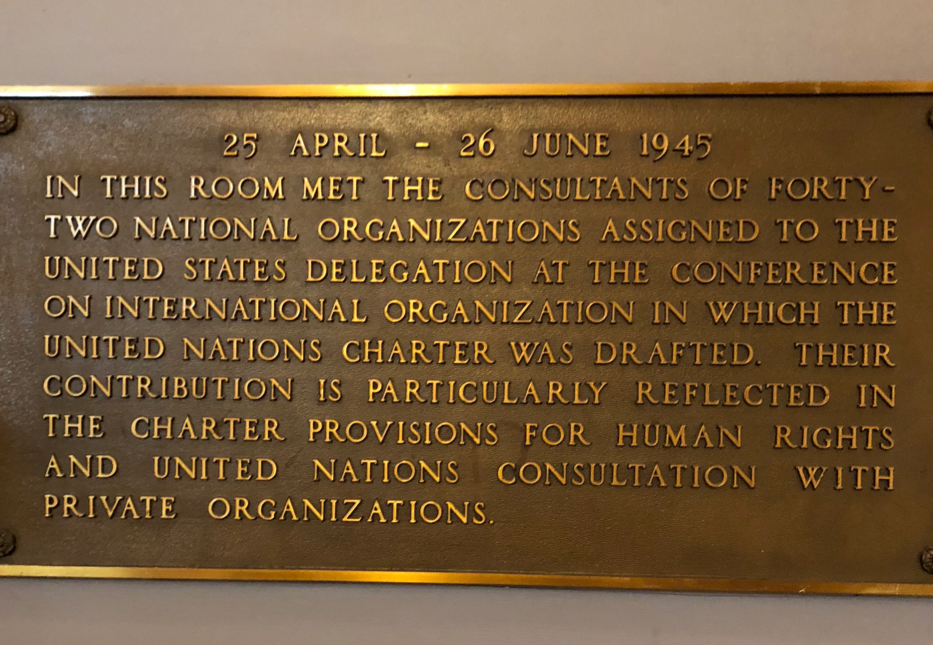 At the Fairmont Hotel in San Francisco, there is a plaque on the wall of the Garden Room that reads:

Non-governmental organizations (NGOs) prepared this plaque to record and remember their achievement. If not for the coordination, engagement, and persuasive advocacy by private NGOs at the 1945 San Francisco Conference, the UN Charter would not have enshrined human rights as the preeminent multilateral organization’s Third Pillar or laid the institutional groundwork for the subsequent development of international human rights law. We commemorate the milestone 75th anniversary of the adoption of the UN Charter on June 26.

Before San Francisco, amidst the horrors of World War II and the Holocaust, many had proposed that a future world order should implement human rights principles. There were high hopes for human rights to be incorporated in the 1944 Dumbarton Oaks Conference outcome document, the draft for the UN Charter. Unfortunately, however, ‘human rights’ appeared there only as “an incidental reference” late in the draft.[i] Word leaked out that the British and Soviet delegations had rejected anything more. Years of efforts in support of human rights seemed to have been for naught.

President Franklin D. Roosevelt wanted to create a global organization through which the great powers could ensure peace and security. He had spoken of his hope for a world founded on “four essential freedoms” to apply “everywhere in the world.” He was keen to avoid past American experience with the League of Nations, which the U.S. Senate had refused to ratify.

To enhance popular support for the new international body, he asked Congressional foreign affairs experts from both political parties to serve on a seven-person US State Department delegation to the San Francisco Conference. The State Department also invited 42 American NGOs to send a consultant to be ‘affiliated’ to the US delegation. These consultants represented major sectors of American life: from farmers, educators and businessmen to labor leaders, women, religious and ethnic groups.

Some of the NGO consultants were convinced that absent strong American support for the inclusion of additional language on human rights in the draft Charter, no such changes would be forthcoming. News reports had indicated that that the Soviets were likely to take a ‘cool attitude’ to proposals that could lead to examination of the treatment of their various nationalities; that the British delegation was fearful of enabling Indian ‘irredentists’ and others; and that even the U.S. State Department was divided about including human rights.[ii]

Several of the NGO consultants had previously worked together to promote attention to human rights and a Commission on Human Rights, but the contribution of Judge Joseph Proskauer and Jacob Blaustein, respectively President and Chair of the Executive Committee of the American Jewish Committee (AJC), deserves special mention. Professor James Shotwell, who headed the influential Commission to Study the Organization of Peace (CSOP), which advanced key proposals for the new world organization, later recalled that AJC leaders did “the major and strenuous part of the thinking” that led to the human rights provisions in the UN Charter.[iii] Before the San Francisco Conference, AJC had commissioned a landmark study, An International Bill of the Rights of Man, by the eminent British legal scholar Hersch Lauterpacht,[iv] and in December 1944 had published a declaration signed by over 1300 distinguished Americans calling for an International Bill of Rights. In March 1945, Proskauer and Blaustein met with President Roosevelt, recalled that Jews had been the principal victims of Hitler’s persecution, and urged the creation of a Commission on Human Rights that would draft an International Bill of Human Rights. William Korey, author of NGOs and the UDHR, concluded that the UN Charter’s “historic breakthrough never would have taken place without the commitment, determination and pressure of a group of American NGOs,” citing Proskauer and Blaustein as “sparkplugs” whose initiative was decisive.[v]

However, in San Francisco, as the deadline for amendments to the Charter approached, US delegation member Virginia Gildersleeve tipped off the NGOs that the delegates would not, after all, provide specifically for a Commission on Human Rights or make other desired changes. The NGO consultants were deeply disturbed to receive this news.[vi] Proskauer recalled that “The one thing above all else” on which the consultants agreed was “the conviction that the Charter of the United Nations … could not be merely a skeleton without flesh and blood; that it was especially vital to create a commission on human rights to enforce fundamental human freedoms.”[vii]

A small group of the NGO consultants immediately prepared a memorandum to the US delegation containing four specific proposals for Charter amendments: (1) to add human rights as a purpose of the world organization; (2) to add respect for human rights to the ‘principles’ section of the Charter; (3) to add human rights to the functions of the General Assembly; and (4) to ensure that a Commission on Human Rights would be mentioned by name in the Charter.[viii] Behind the scenes, Blaustein also lobbied US delegation adviser Isaiah Bowman, a fellow Baltimorean, on the importance of including the human rights proposals. Twenty-one NGOs signed the statement by the time that the NGO consultants began an emergency meeting with Secretary of State Edward Stettinius. Several NGOs spoke, starting with O. Frederick Nolde of the Federation of Churches of Christ, who explained the contents of the joint memorandum.  Then AJC’s Joseph Proskauer, principal drafter of the memorandum, delivered an appeal:

When Proskauer finished, Philip Murray, president of the Congress of Industrial Organizations, stood up, and declared that he had not signed the paper. Tension grew, but soon subsided as he explained no one had yet brought it to him and declared: “…we are 100 percent behind the argument that has just been made.”[x] Stettinius immediately left for a US delegation meeting at which he read the NGO letter aloud and recounted Proskauer’s warning. While one delegation member stated that they already supported two of the Consultants’ four proposals, Stettinius told them he would inform President Truman about all four of them and about the consultants’ views on the benefits of trying for them all, even with a risk of failure. Stettinius declared that he also would propose publicly announcing US support for the NGO human rights proposals.[xi]

By May 5, the Americans had reached an agreement with the other members of the “Big Four” – Britain, the Soviet Union, and China – to propose amendments to the draft Charter that “met the spirit” of the consultants’ suggestions.[xii] The UN Charter calls for the creation of a Commission on Human Rights by name, cites the promotion of human rights as a purpose of the organization, and promoting respect for human rights a responsibility of the General Assembly and the Economic and Social Council. The Charter repeatedly affirms “human rights and fundamental freedoms for all without distinction as to race, sex, language or religion.”[xiii]

In Blaustein’s words, one of the great achievements of the San Francisco conference was that “For the first time in history, the question of human rights and the treatment of individuals has been officially recognized as being of vital international concern” and cited the creation of the Commission on Human Rights as “a great step forward because in it, we have the actual international machinery for creating a new world order.”[xiv]  Indeed, the Commission went on to draft the Universal Declaration of Human Rights and the nine core human rights treaties and their protocols and to pave the way for the creation of the independent UN human rights experts and human rights monitoring entities known as special procedures, fact-finding missions, and commissions of inquiry that exist today.

Beyond ensuring the creation of a multilateral architecture for the elaboration and promotion of respect for international human rights law, the consultants to the US delegation to the San Francisco Conference also demonstrated the potential for citizen action to impact both US foreign policy and the structure, functions, and actions of multilateral organizations.[xv]

In this sense, the story of the inclusion of human rights in the UN Charter is also the story of the power of effective NGO advocacy to ensure more effective protection of international human rights.  While all of the principal actors in this origin story are Americans, the emergence of a global human rights NGO movement since 1945 which has carried forward the work they initiated suggests that the idea of human rights continues to have universal resonance and legitimacy and that it can continue to inspire advocacy and action on a global scale.

Letter from NGOs to Secretary of State Edward Stettinius with proposals for Charter Amendments: 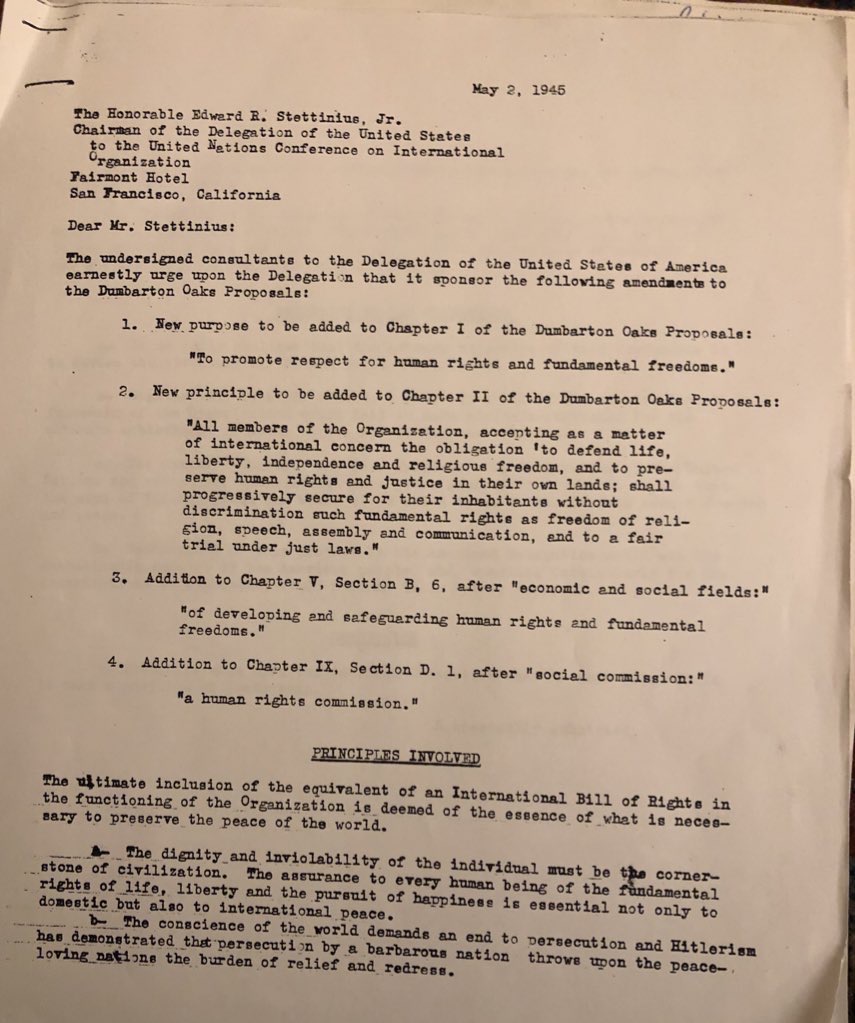 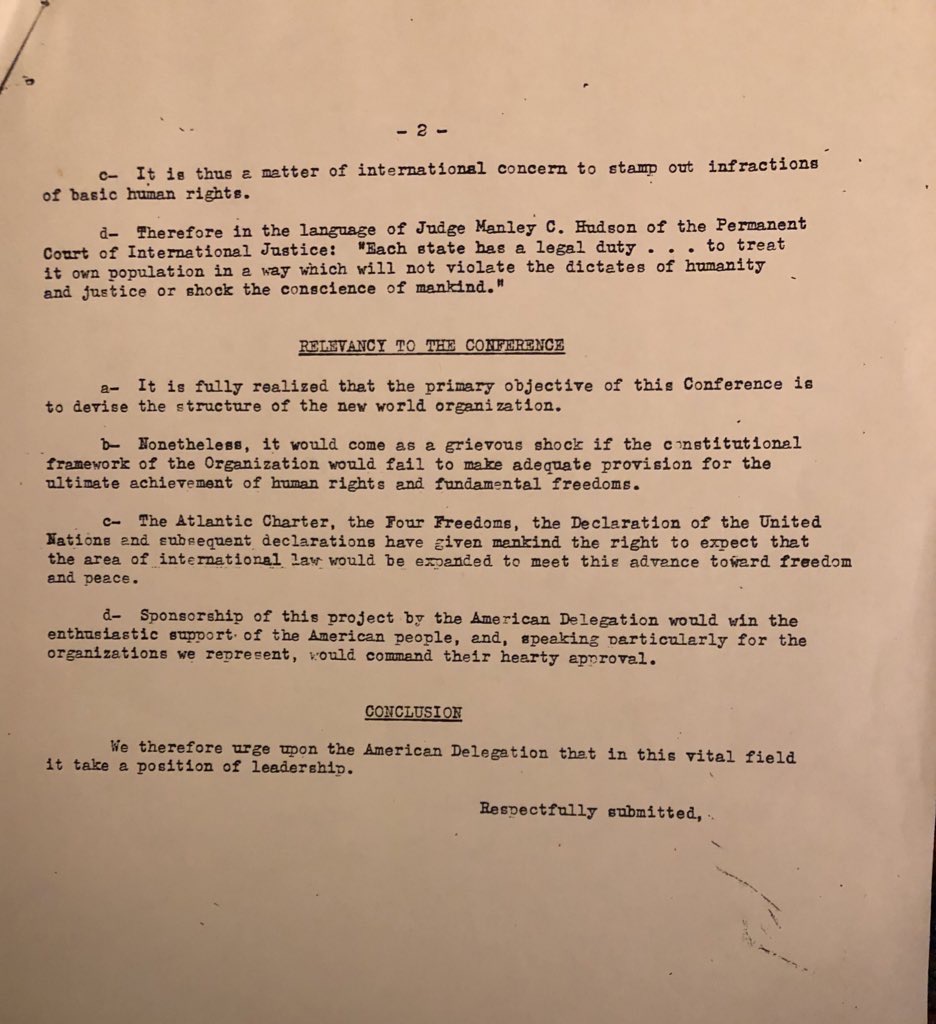 [xii] Alice McDiarmid, “The Charter and the Promotion of Human Rights,” in Dept of State Publication 2573, “Organizing the United Nations…”, US-UN Information Series 6, p. 41. The Secretary publicly gave credit for the inclusion of the Commission on Human Rights to the consultants.

[xv] Korey, p. 29.  Korey cites John Humphrey, first head of the UN’s human rights office, affirming that, without these NGOs, there would be “only a passing reference” to human rights in the Charter. Professor James Shotwell lauded Judge Proskauer’s argument at the Stettinius meeting as “the most eloquent and convincing argument that I have ever listened to in my life.”  Moreover, Shotwell concluded, “he completely won over the meeting…”  A World Charter for Human Rights.