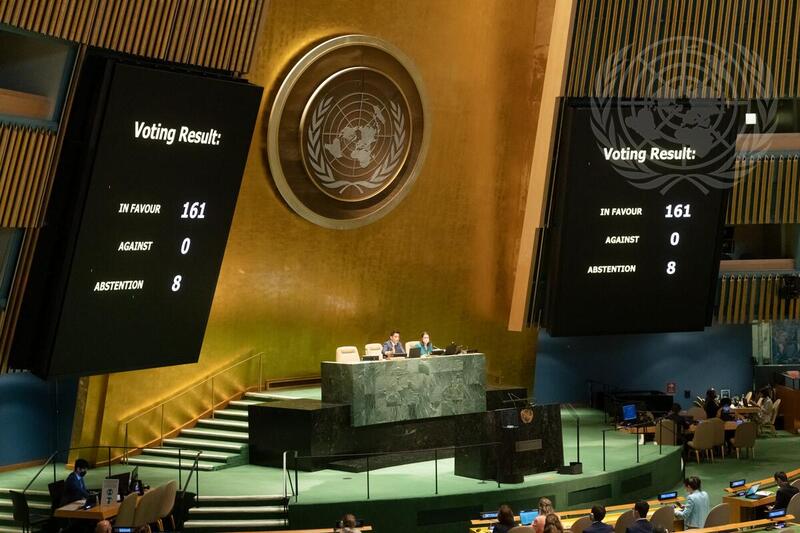 Following the Human Rights Council and General Assembly resolutions recognising the right to a clean, healthy, and sustainable environment (R2E), adopted in 2021 and 2022 respectively (HRC/RES/48/13 and A/RES/76/300), it is time to consider appropriate next steps in advancing the legal recognition, implementation, and monitoring of this right.

With the above in mind, on 18 October the Permanent Mission of Costa Rica in Geneva, UNEP, and the Universal Rights Group hosted an informal lunch bringing together over 20 human rights experts from Geneva Permanent Missions in a non-attributable setting designed to promote open and forward-looking debate on appropriate next steps. The discussion was informed by an ‘options paper’ prepared by the Special Rapporteur on human rights and the environment, Dr David Boyd, detailing three possible ways to advance the R2E, which he argued can and should be carried out concurrently.

One option would be a legally binding global instrument incorporating the R2E. The paper points toward different avenues for a legally binding global instrument, including a new international human rights treaty on the R2E; an additional protocol to an existing human rights instrument; a joint optional protocol to both existing international covenants; or incorporation in a new international treaty on environmental law (i.e., the proposed Global Pact on the Environment).

A second option is implementation and realisation of the R2E by the UN human rights mechanisms. The paper provides examples of how the UPR process and Treaty Bodies can be fully mobilised to promote the implementation and realisation of the R2E. In the UPR process, recommending States can encourage States under review to recognise the right (where they are yet to do so), or strengthen implementation where they do, while Treaty Bodies could include relevant guidance to States in their concluding observations or in new general comments.

Finally, monitoring the degree to which the R2E is being respected, protected, fulfilled, and promoted. The Special Rapporteur identifies different avenues available for a variety of institutions to meet this responsibility through, for example, the consistent inclusion of the R2E in national, UN system, and ‘other stakeholders’ reports submitted to the UPR; in State periodic reports and alternative reports relevant to Treaty Bodies, and in the ‘lists of issues’ and concluding observations adopted by the Committees.

The lunch provided a space for stakeholders to exchange views on these avenues. While no State strongly disagreed with the proposal of a new instrument, some representatives argued that there is no need for an instrument given that over 150 States are already obliged to respect, protect, and fulfil the R2E under national law (including, in many cases, constitutional law) or by being party to relevant regional human rights instruments (i.e., the Aarhus Convention, or the Escazú Agreement).

Not everyone agreed with this reading, however. A participant pushed back against this argument referring to the complementary and mutually reinforcing nature of the national, regional, and international human rights systems, and the fact that by following the above logic there would be no international instrument covering, for example, freedom of expression or assembly, as these are in all national constitutions.

In arguing that there is no need for a new instrument, some participants furthermore drew a comparison with the right to water and sanitation, where there is no instrument yet there has been progress with implementation, as many countries have integrated the right into their constitutions since it was recognised by the UN. Yet, as was noted in a response, the key difference is that the right to water is part of the right to an adequate standard of living (and this already covered by the ICESCR), whereas the R2E is a standalone right.

Another argument against, at least for the time being, is that discussions and eventually negotiations on a legally binding instrument might ‘put at risk the growing international consensus’ and ‘feel good factor’ around R2E. Again, in response, one speaker noted that progress on R2E to-date had not been easy and had been pushed by the ambition of the core group over 12 years.

Ultimately, proponents of a new instrument argued that ‘universal human rights norms are meaningless without corresponding legally binding obligations upon States.’ These proponents, who were in a clear minority during the meeting, also argued that much of the work on the scope and content of the newly recognised right has already been done by the Special Rapporteur.

In response, several speakers expressed concern that any negotiations would be ‘long and drawn out’ and likely acrimonious, especially when discussions turned to controversial issues such as ‘common but differentiated responsibilities’, and extraterritoriality. It was noted, however, that negotiations on a new instrument should occur in parallel with – not instead of – other actions outlined in the Special Rapporteur’s options paper.

Regarding the implementation and realisation of the R2E by the human rights mechanisms, the discussion revolved around mobilising the UN human rights mechanisms to ‘mainstream’ and ‘implement’ R2E. This would mean that, following the twin Human Rights Council and GA resolutions, the mechanisms (UPR, Treaty Bodies, and Special Procedures) can now scale up their actions on R2E, especially by delivering recommendations on the subject to States. That should include recommendations to States that do not yet have this right enshrined in their laws (these States should work to recognise R2E nationally), but also to those that have already recognised the right (which should work to implement and expand it).

Some participants suggested the creation of a coalition of States that could work to push R2E across all mechanisms (especially the UPR – i.e., by extending recommendations) as well as other settings (e.g., in environmental negotiations). However, the lack of a common understanding around R2E was raised again as a challenge to bring together such coalition.

Regarding promoting implementation and realisation, participants also raised the importance of UN Resident Coordinators and Country Teams. These, it would said, could now (following UN recognition) work more robustly to integrate R2E into their country-level planning and programming.

With regards to monitoring the degree to which the R2E is being respected, fulfilled, and promoted, participants raised the need to build capacity amongst and inform/educate Treaty Body members about the right, to encourage reviewing States in the UPR to ask advanced questions about the right, and to encourage national ministries to include information about the right in national reports to the UPR and Treaty Bodies. They also spoke about mainstreaming the right into multilateral environmental agreements so that it can be monitored by bodies responsible for those treaties.

While there were differing views on how to move forward, some participants emphasised the importance of taking advantage of the momentum created by the adoption of Council and GA resolutions. Others, however, warned that the launching of negotiations on a new instrument could put that momentum at risk.

Ultimately, participants agreed that the way forward is not an ‘either / or’ decision: it is not about choosing to focus either on starting negotiations on new instrument, or focusing on other aspects (i.e., mobilising the mechanisms into mainstreaming R2E across the work of UN mechanisms, Country Teams, agencies, and programmes). Instead, both courses of action are mutually reinforcing and should move forward together.

UN Photo/Mark Garten, 28 July 2022, New York, United States of America. The General Assembly adopts a resolution on “the human right to a clean, healthy and sustainable environment” (A/76/L.75). The resolution was adopted with 161 votes in favor, 0 against and 8 abstentions.