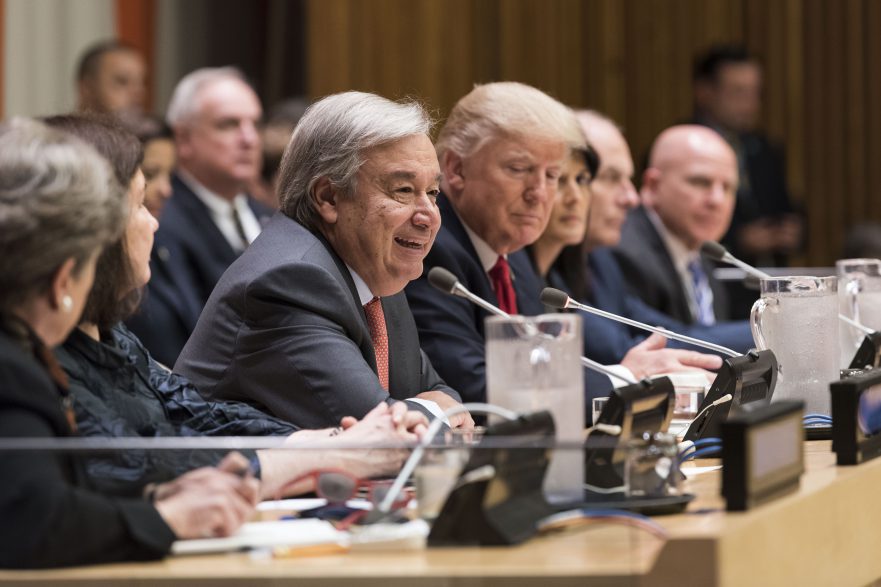 Almost immediately after taking Office in January this year, UN Secretary-General Antonio Guterres announced his intention to introduce wide-ranging reforms to the way the UN works and how its delivers on its mandate. By and large, those reforms have been warmly received by States, civil society, and the press. Indeed, on 18 September, during a high-level event on UN reform held on the margins of the UN General Assembly (GA), over 120 States signed a ten-point political Declaration expressing their commitment to the Secretary-General’s reform agenda. Even US President Donald Trump, not known for his enthusiasm for the multilateral system, has aligned his Administration in support of the reforms.

But what are those reforms and what are their likely implications for the UN’s human rights pillar?

According to the Secretary-General, the overall goal of his reform agenda is to create a ‘21st century UN ‘ that is better equipped to address the complex contemporary challenges facing humankind. It is also, as he has admitted in various public meetings, to show ‘important stakeholders’ (read: the Trump administration in the US) that the UN is capable of responding to suggestions that is ‘not effective, wast[es] money, [is] not delivering, and [is] unable to stop conflicts.’ As the Secretary-General admitted during a July ‘Town hall’ meeting, to introduce some of his proposals: ‘reform at the present moment is an essential instrument for the protection of the UN in a complex context.’

The Secretary-General has also been very clear about his approach to reform: that it should be guided by the need to reduce and eventually eliminate ‘the horizontal and vertical fragmentation between the pillars of UN work’ (e.g. between the UN’s ‘peace architecture’ covering prevention, conflict resolution, peacekeeping, peace-building, and the UN’s ‘long-term development’ work). Instead, the UN should deliver a country-orientated service, which understands that, for example, sustainable development and capacity-building are essential prerequisites for building national resilience and preventing conflicts.[1]

Thus far, he has focused, in particular, on reforms across three areas: UN management (Secretariat); the development system; and the UN’s peace and security architecture. The Secretary-General has assigned three ‘different internal review teams working together’ to lead on each of these areas of reform.

According to the Secretary-General, his management reforms are based on the premise that the UN Secretariat must be better organised and thus ‘better able to deliver on our mandate.’ Central to this is the idea that the current highly centralised management system (developed in the 1940s and 50s) must be reformed to better reflect the modern reality of the field-based UN: ‘that’s where we do what we do, and where 2/3 of our staff work.’ Those reforms should aim to promote decentralisation, provide greater management flexibility for the Secretary-General, and create a Secretariat for a ‘21st century UN’ that is ‘nimble and effective’ and that works with high levels of ‘transparency and accountability.’[2]

In July, the Secretary-General held a ‘Town hall’ meeting with UN staff to introduce the key parameters of his management reform plans.

He explained that his reforms are based on the concept of two contracts:

To achieve this, he informed colleagues that he would propose to Member States to restructure the Secretariat into two broad departments:

In terms of next steps, the Secretary-General explained that he would continue to consult widely on his proposals, with States and with UN staff, and would submit an ‘initial strategic document (a proof of concept)’ to the General Assembly in 2017. Later, he would submit a ‘detailed costed breakdown’ of each aspect of the reform package to the GA. He expressed his hope ‘to have the whole new system in place by 1 January 2019.’

Regarding reform of the UN’s development system, Mr Guterres has called for ‘bold changes’ in order to support the realisation of the Sustainable Development Goals by 2030. In July 2017, he presented a report to the UN’s Economic and Social Council (ECOSOC) on ‘Repositioning the UN development system to deliver on the 2030 Agenda – Ensuring a Better Future for All,’[3] in which he presented some initial priorities, strategic guidelines and proposals for reform.

It is important – and interesting – to note that few, if any, of these ideas are entirely new. Many of them (e.g. the replacement of dispersed national offices with strong regional bureaus, decentralisation to county-level) can be found, for example, in the famous 1969 ‘Capacity Study of the United Nations Development System’ – sometimes referred to as the ‘bible of UN reform.’[4]

On 13 October, the Secretary-General presented a report to the GA on ‘Restructuring of the United Nations peace and security pillar,’[5] containing his initial reform proposals. In the report, Mr Guterres acknowledges that ‘today’s peace and security challenges and the shortcomings of the Organisation that have been identified in a number of reviews and studies’ call for ‘adjustments to the architecture and working methods of the peace and security pillar of the Secretariat, with a view to enhancing the effectiveness of the pillar by reducing the fragmentation of efforts and ensuring a more joined up, whole-of-pillar approach to the delivery of mandates and stronger cross-pillar cooperation.’

The report describes the basic goals and underlying principles of his reform, and presents important proposals to restructure the Department of Political Affairs, the Department of Peacekeeping Operations, and the Peace-building Support Office, and to promote a change in the UN’s ‘working culture.’

The Secretary-General makes clear in his report that these are initial (fairly broad) proposals and that ‘should the GA support the concept and the outlines of the reform, another report providing further details on the proposal, including its full financial implications, will be submitted.’

Regarding the overarching goals of the proposed reforms, the Secretary-General notes his wish to: prioritise prevention and sustaining peace; enhance the effectiveness and coherence of peacekeeping operations and special political missions; make the peace and security pillar more coherent, nimble and effective through a ‘whole-of-pillar’ approach; and align the peace and security pillar more closely with the development and human rights pillars.

The proposals include five main elements:

If this is indeed the case, it has deeply negative implications for human rights, but also – it must be said – for the Secretary-General’s overall reform agenda.

As already noted, the Secretary-General’s reforms are premised on the need to reduce and eventually eliminate ‘the horizontal and vertical fragmentation between the pillars of UN work.’ However, when spelling out what that means in practice, the Secretary-General (e.g. in his speech to the Town hall event with staff) speaks only of eliminating barriers between the ‘UN’s peace architecture’ (i.e. its peace and security pillar) and its ‘long-term development’ work (i.e. its development pillar). The problem is, by side-lining or ignoring the human rights pillar in his equations, the Secretary-General is de facto making the achievement of his headline objectives – greater UN-wide coherence, especially at country-level, a heightened focus on prevention, a consistent drive the support the implementation of the 2030 Agenda for Sustainable Development – practically impossible. Prevention (in its broad sense) is simply impossible without a focus on building the domestic human rights resilience of States (e.g. through human rights capacity-building), and without a UN human rights system that is able to rapidly collate, analyse, and act upon early warning information about emerging patterns of human rights violations. Likewise with sustainable development, a recent study by the Danish Institute for Human Rights has shown that over 90% of the SDG targets are directly anchored in international human rights instruments and heavily dependent on domestic human rights progress (i.e. progress with the implementation of States’ human rights obligations).

On a few occasions the Secretary-General has recognised that his drive to improve coherence and on-the-ground delivery must involve the human rights pillar. For example, in his report to the GA on ‘Restructuring of the United Nations peace and security pillar’ he acknowledges one of the key objectives of his reforms is to ‘align the peace and security pillar more closely with the development and human rights pillars.’ However, such occasions appear – for the moment – to be the exception rather than the rule, meaning these much needed reforms designed to bring greater UN wide coherence, are in themselves incoherent.

[1] The Secretary-General introduced his Management Reform Initiative to the Secretariat staff at a Town-hall meeting held on 26 July 2017. Available at: http://u-seek.org/wp-content/uploads/2017/08/SG-Townhall-26-July-final-1.pdf.

[2] Secretary-General’s statement to the ECOSOC, 5 July 2017. Available at: https://www.un.org/sg/en/content/sg/statement/2017-07-05/secretary-generals-remarks-economic-and-social-council-repositioning.