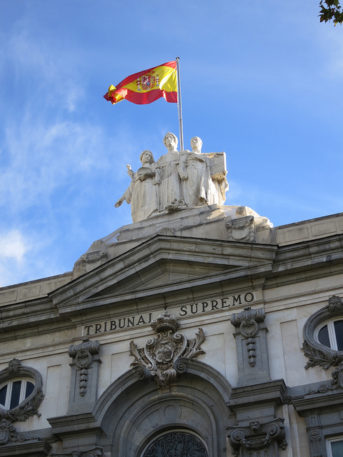 The Spanish Supreme Court has established that the views expressed by UN Human Rights Treaty Bodies in individual complaints are binding on the State. The Court ordered Spain to pay €600,000 in compensation to Ángela González for the responsibility of its authorities in relation to the death of her daughter. Her daughter was murdered by her father in an unsupervised visit authorised by a judge. National courts dismissed Ángela’s case, but the Committee on the Elimination of Discrimination Against Women (CEDAW Committee) found a breach of her human rights. The Supreme Court has now affirmed that the State must comply with the Committee’s decision. This article discusses the significance of the case and the principle established by it.

Ángela González:  from domestic violence up to the United Nations (1996-2014)

Ángela’s daughter Andrea was born in 1996. Ángela’s partner subjected her to frequent physical and psychological violence. Ángela lodged no less than 30 complaints to the police and to the court. Her partner was convicted for one minor offence and ordered to pay a small penalty for harassment. Only one judicial order protected the minor and lasted for two months.

Marital separation was ordered in November 2001. The judge did not mention the violence as the cause of separation. The order allowed unsupervised visits between father and daughter, and the father was granted the use of the family dwelling. Ángela appealed the decision but was unsuccessful. Andrea had repeatedly expressed her desire not to see her father. In April 2003, the father killed the 7-year-old girl and then committed suicide during an unsupervised visit.

After months of mourning, Ángela filed a claim for compensation for miscarriage of justice. The Ministry of Justice dismissed the claim in 2005. Administrative and judicial appeals followed until the Supreme Court, in 2010, and the Constitutional Court, in 2011, denied the claim.

Ángela submitted a complaint to the CEDAW Committee in 2012 after exhausting all domestic remedies. In the final ruling on the merits of 2014 (Case 47/2012) the Committee concluded that “the decision to allow unsupervised visits was taken without the necessary safeguards and without taking into account (…) the pattern of domestic violence that had characterized family relations for years” (para. 9.5); Ángela “suffered harm of the utmost seriousness and an irreparable injury as a result of the loss of her daughter and the violations described” (para. 9.8). Spain had failed to act with due diligence in a particularly tragic case of gender-based violence and this amounted to discrimination and the violation of Ángela’s human rights.

Ángela embarked in yet another path of administrative and judicial appeals hoping to see the UN Committee’s views implemented domestically. This time around, the Supreme Court ruled in her favour (Judgment 1263/2018, of 17 July, here in Spanish, see particularly pages 23-28).

The government argued that, unlike the European Court of Human Rights, there is no administrative mechanism in place to enforce Treaty Body decisions and therefore there is no way around the principle of res judicata.

The Supreme Court reached a different conclusion. While it is true that neither the Convention nor its Optional Protocol establish the directly enforceable character of decisions on individual complaints, Article 24 CEDAW commit States to “adopt all necessary measures at the national level aimed at achieving the full realization of the rights recognized” therein, and Article 7(4) of the Optional Protocol establishes that States “shall give due consideration to the views of the Committee”. Furthermore, Article 96 of the 1978 Constitution affirms that international treaties “form part of the internal legal order”, and the constitutional bill of rights must be interpreted in accordance with international human rights law (Article 10(2) of the Constitution). The Supreme Court goes further to maintain that complying with Treaty Body decisions is a matter of Rule of Law, and not doing so would breach the principles of legality and legal hierarchy proclaimed in Article 9(3) of the Constitution. The Supreme Court concludes that the “inexistence of a specific procedure to execute the views of the CEDAW Committee (…) constitutes a breach of a legal and constitutional mandate by Spain”.

The Court ordered the government to pay Ángela €600,000 in compensation. But the judgment achieved more than this. In the words of Ángela, “after fifteen years, the justice system finally gives me back my dignity. I hope that this Supreme Court ruling will help the justice system never again entrust any of our sons and daughters to an abusive father”.

This is a revolutionary decision not only for Spain, but for comparative constitutional law and for international human rights law.

Two caveats are in order. Firstly, this is the first ruling of its kind. Unfortunately, the patience of more claimants will have to be tested for a case-law principle to be established. Secondly, and more significantly, the CEDAW Committee (para. 10) distinguished between the recommendations concerning Ángela and those of general law and policy. In fact, this is a common practice among Treaty Bodies. The Spanish Supreme Court has now ruled that economic compensation is in order if public authorities fail to comply with recommendations with respect to the author of the communication. This is a major development. Yet, the Court made no reference to the legal enforceability of law and policy recommendations, which are frequently formulated in generic terms and their implementation would require the involvement of a variety of actors at different levels. Demanding States to abide by general recommendations as a matter of law would be impractical in many instances and it would probably exceed the purposes of international individual complaint mechanisms.

Having said that, it would be most uplifting if other national courts followed the judicial principle that has emerged in Madrid. Governments all around the world can, and must, do more to take the UN Treaty Body system more seriously. Merely 42% of the decisions where the Committee Against Torture found a violation were given a satisfactory or partially satisfactory answer by the State (2018 report, para. 87). The Human Rights Committee reports 22% “satisfactory” responses and 32% “partially satisfactory” responses from States (2017 follow-up progress report on individual complaints).

Raising the legal weight of UN decisions on individual complaints could lead to a greater use of this redress mechanism. According to Universal Rights Group (2017), 23% of the States Parties to the International Covenant on Civil and Political Rights, and 46% for the Convention Against Torture, have never been the subject of an admissible decision. Of more recent creation, the figures are as high as 81% for CEDAW, 87% for the Convention on the Rights of Persons with Disabilities and for the Convention on the Rights of the Child, and 91% for the International Covenant on Economic, Social and Cultural Rights (data updated by author from OHCHR database).

The jurisprudential status quo gives ammunition to States to oppose the jurisdiction of Treaty Bodies. The UK government, for example, justified its rejection of several UPR recommendations regarding Optional Protocols by noting that “the UN process is not an appeal mechanism, it cannot reverse decisions of the domestic courts, and it cannot result in an enforceable award of compensation for the applicant” (UK Ministry of Justice, Response to UPR recommendations, August 2017, p. 12). They could have added that the mechanism is hardly used by claimants, since only six cases have reached the table of the two UN Committees, whose jurisdiction has been accepted by the UK (three for CEDAW and three more for CRPD), and all six of them were declared inadmissible.

A jurisprudential turn would take this excuse away from governments and could lead to more international cases from lawyers and claimants. Whether the UN Secretariat would be ready to deal with a significant increase in the number of complaints is a different matter.

Dr. Koldo Casla is a Research Fellow at the Institute of Health & Society of Newcastle University. He holds a PhD in European and International Studies from King’s College London. He is also the Policy Director of Just Fair, an organisation that monitors and advocates economic and social rights in the UK.

This article first appeared on EJIL: Talk! , and has been reproduced with the author’s kind permission.