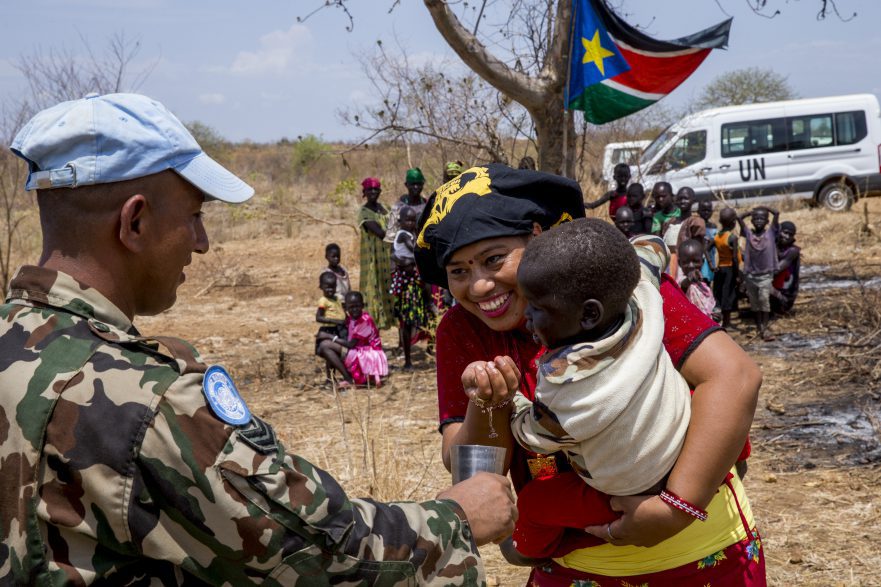 UN Member States have long recognised the importance, under certain circumstances, of addressing country-specific human rights situations. Where a given country’s government is unable or unwilling to protect the rights of its people, or indeed, where a government is actively complicit in serious human rights violations; then the international community must be ready to step in. This principle, first introduced by countries of the global South in the 1960s and 70s when demanding a UN response to serious human rights violations in Apartheid South Africa, Palestine and Chile, was reaffirmed at the 2005 World Summit, when heads of State and government made clear that a core mandate of the new Human Rights Council would be to ‘address situations of human rights violations’ (operative paragraph 3, GA resolution 60/251) and, ideally, prevent serious situations of violations from happening at all (operative paragraph 5f).

Notwithstanding, as any observer of the Council, or its predecessor – the Commission on Human Rights – will know, realising the UN’s crucial protection and prevention mandates has been far more difficult in practice than in principle.

The main reason for this is, of course, that the Council, like the Commission before it, is an intergovernmental and therefore profoundly political body. Consequently, decisions on which situations merit the UN’s attention (in either a protection or a prevention sense) are political decisions, taken by States based on their own worldview and their own national interests. This situation is further exacerbated by the fact that very few States or groups of States possess the political will and/or capital to take such decisions and thus bring situations to the Council’s attention (basically, the US, the EU/UK) and, in a comparatively small number of cases (e.g. on the situations in Cambodia, DPRK, Myanmar, OPT, Eritrea), Japan, the OIC, Ethiopia and Somalia.

Prevention better than the cure

In the context of the Council’s traditional protection mandate, the fulfilment of which tends to be characterised by condemnatory resolutions and/or the creation of monitoring/accountability mechanisms such as Special Rapporteurs or Commissions of Inquiry (COIs); it is difficult to see allegations of ‘politicisation’ or ‘selectivity’ disappearing any time soon. The positions of powerful Council member States on questions such as ‘naming and shaming’ and ‘imposing’ mandates without the consent of the concerned State, are simply too far apart.

However, the outlook is somewhat brighter in the context of prevention.

Paragraph 5f of GA resolution 60/251 is clear that the Council has a mandate to:

‘Contribute, through dialogue and cooperation, towards the prevention of human rights violations and respond promptly to human rights emergencies.’

The resolution furthermore, in its preambular paragraphs, recognises:

‘The importance of ensuring universality, objectivity and non-selectivity in the consideration of human rights issues, and the elimination of double standards and politicization.’

In practice as well as in principle, these two paragraphs can and should be complementary and mutually reinforcing. What is needed, in order for the Council to fulfil its prevention mandate, is for Member States: to receive accurate and timely ‘early warning’ information about emerging patterns of human rights violations that may give cause for concern; to convene in a timely manner to consider that information; and then to undertake such considerations in a dispassionate and objective manner (i.e. against a human rights framework rather than geopolitical one) in order to determine whether the situation might benefit from early Council engagement – through cooperation and dialogue – with the country concerned.

To regular observers of the Council over the past eleven years, this may seem rather utopian. Yet, over the past two years, States have begun to take steps and introduce certain innovations that bring us closer to this ideal – and to the effective and objective implementation of paragraph 5f.

First, building on an idea developed at the second Glion Human Rights Dialogue (Glion II) in May 2015, the-then President of the Council, Joachim Ruecker, and the High Commissioner for Human Rights, Zeid Ra’ad Al-Hussein, introduced a new informal work format – urgent Council briefings by or ‘conversations with’ the High Commissioner. The idea behind these ‘conversations’ is simple: to provide a flexible space or platform through which the High Commissioner can bring ‘early warning’ information – and his assessment of that information and what it means for the human rights of individual people – to the Council’s attention. To-date there have been three such briefings: two in 2015 (on the migrant crisis in the Mediterranean, and on the situation in Burundi); and one in late 2016.

Second, building on ideas generated during the third Glion Human Rights Dialogue (Glion III) in May 2016, during the 32nd session of the Council in June 2016, Ireland, on behalf of a cross-regional group of States, delivered a statement proposing possible objective criteria that might guide Council decision-making on which situations might necessitate and benefit from early Council preventive action (through cooperation and dialogue with the concerned State).

In the statement, which built on a June 2012 joint statement delivered by the Maldives on behalf of members of the Article 4 Dialogue, Ireland proposed a set of ‘guiding principles’ to ‘help us decide, in an objective and non-selective manner, when the Council should usefully engage with a concerned State, to prevent, respond to, or address violations and to assist in de-escalation of a situation of concern.’ Criteria suggested by Ireland include: ‘has the High Commissioner expressed concerned about the situation; have Special Procedures mandate-holders expressed concern; do journalists and humanitarian actors have access to the country concerned; has the government of the country itself recognised it faces difficulties; and has the country’s NHRI (where one exists) and/or NGO community sounded the alarm?’

The aim of the initiative was to begin to provide Council member States with the tools they need to consider early warning information in a dispassionate and objective manner in order to determine whether the situation might benefit from early Council preventative engagement – through cooperation and dialogue – with the country concerned.

But would such guiding principles or objective criteria help in practice?

In order to help answer this question, in December URG undertook a first attempt to apply the ‘Irish Principles’ to three situations – situations raised by the High Commissioner in his November urgent briefing, and situations about which the Council, towards the end of last year, was receiving worrying early warning information about human rights violations. Those situations were: Burundi; DRC; and South Sudan.

The results of that analysis are presented in the table below.

For the purpose of the analysis, ‘red’ was used to indicate where the objective criterion, when compared against ‘early warning’ information about the situation, seems to suggest that preventive action, through cooperation and dialogue, should be considered; ‘amber’ where the result of the analysis is inconclusive; and ‘blank’ where available early warning information was insufficient to indicate whether preventive action should be considered or not. The analysis is based on objective data primarily collected from official UN documents, or by other international organisations and civil society. The full detailed analysis can be found here. 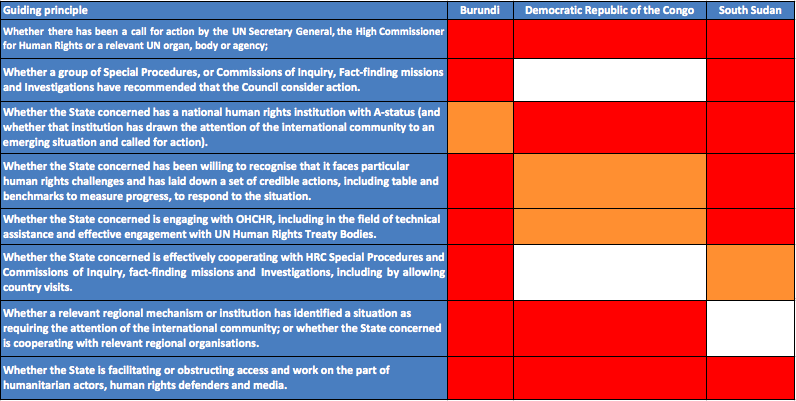 As a historical footnote, in the end (and without applying these criteria), the Council decided to act vis-à-vis just one of these situations: South Sudan. On 14th December, the Council held a Special Session on South Sudan, at the request of Albania, Paraguay, the United Kingdom, and the United States of America. During the organisational meeting, held ahead of the Session, the then US Ambassador, Keith Harper, emphasised the urgent need for the Council to take preventive action, ‘to act on the evidence of growing violence and violations and abuses of human rights in South Sudan, and to prevent the potential for further mass atrocities,’ and stated, ‘there is still time to prevent this situation from escalating, and that is why the United States has initiated this Special Session now.’

Feature photo: The United Nations Mission in South Sudan (UNMISS) handed over to the community of Moroyok in Juba County a newly-completed Primary Health Care Unit constructed by the Mission’s Nepalese Battalion (NEPBATT-II) and coordinated by the UNMISS Relief, Reintegration and Protection (RRP) section. This was one of nineteen Quick Impact Projects (QIPs) underway in South Sudan. 08/04/2016. UN Photo/JC McIlwaine, licensed under BY-NC-ND 2.0.