Policy or aspiration: shedding light on the current status of the UN’s Human Rights Up Front initiative 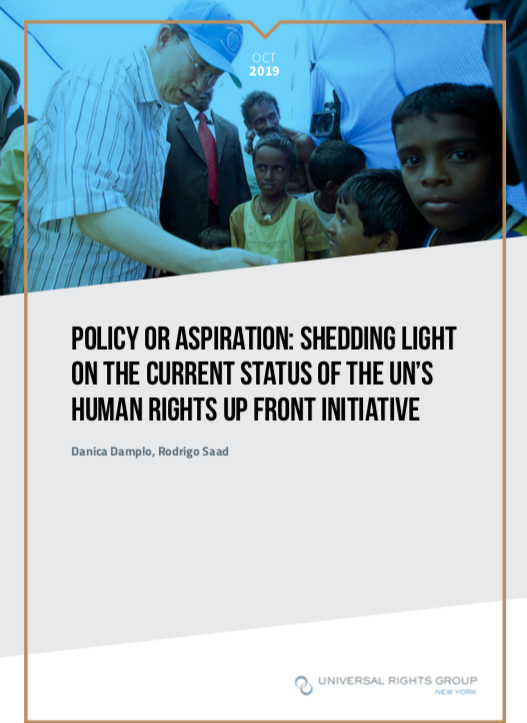 The question of ‘what happened to Human Rights up Front’ is an oft repeated refrain in meetings with New York civil society. However, little consistent, clear information had been offered on the status of the initiative within the UN secretariat. This led to many inside and outside that system to believe that the initiative was dead, or reconfigured beyond recognition. This report, funded and supported by Universal Rights Group and the Jacob Blaustein Institute, is the product of nearly a year of research, conversations, and analysis, sheds light on the current status of the UN’s “Human Rights up Front” (HRuF) initiative, identifying key areas in which it resembles as well as differs from the original initiative.

In 2013, then United Nations (UN) Secretary-General Ban Ki-moon launched the HRuF initiative. The creation of HRuF followed the publication of an Internal Review Panel report by Charles Petrie, which documented the catastrophic failure of UN actors in Sri Lanka to protect and come to the aid of populations caught up in violent conflict.Grounded in the UN Charter, HRuF sought to ensure a cross-pillar approach by UN staff in the field, regardless of agency or mandate, in order to prevent serious human rights violations and conflicts. It envisioned identifying risks at an early stage and leveraging the full range of UN mandates and capacities, ensuring that country-level action is adequately supported by UN headquarters. HRuF was received warmly by human rights activists, many of whom hoped the initiative would allow the UN to uphold its responsibilities under the UN Charter, even in the most difficult operational contexts.

In the face of considerable internal and external challenges, however, the HRuF initiative did not fully take root in the UN system. This was revealed particularly starkly in Myanmar, where the UN, confronted with a years-long crisis that culminated in a violent campaign by armed forces against Rohingya communities in 2017, engaged in the same mistakes that the Petrie report had documented in Sri Lanka only a few years earlier. Additionally, since 2017, the elimination of the UN Director-level post dedicated to the initiative’s implementation, coupled with a lack of public information on HRuF, have led many to believe that the initiative has been weakened or reconfigured beyond recognition, or has been completely eclipsed in priority and focus by current Secretary-General António Guterres’ reform agenda. While the reality is more complex, the findings of recent reports on Myanmar confirm that scepticism about the effectiveness, if not the continued existence, of the present HRuF initiative is warranted.

In light of recent reports of UN failure in Myanmar tragically reminiscent of those that inspired the creation of the HRuF initiative, the report also identifies the opportunities and challenges that lie ahead, including in the context of new UN reforms, that could have a substantial impact on the organization’s ability to respond as “one UN” to human rights crises in the future.