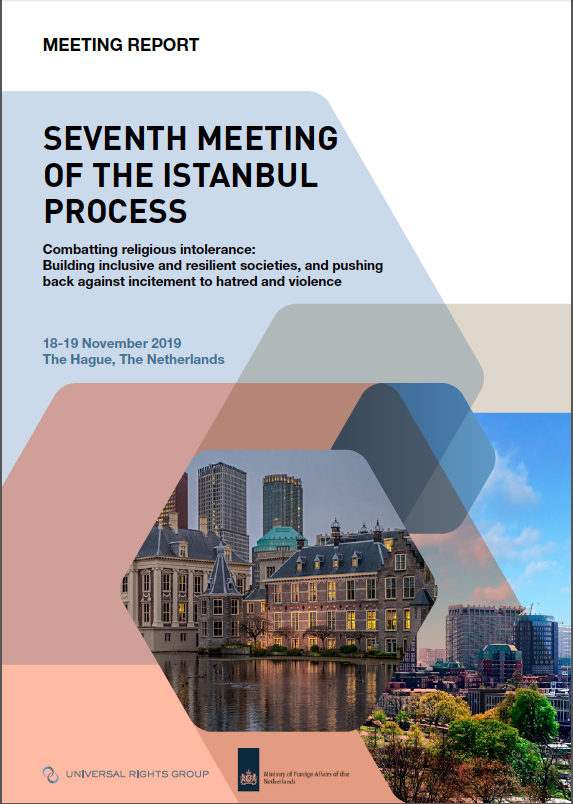 On 18-19 November 2019, the Ministry of Foreign Affairs of the Kingdom of the Netherlands with the support of the Universal Rights Group (URG) hosted the seventh meeting of the Istanbul Process. The meeting was entitled, ‘Combatting religious intolerance: building inclusive and resilient societies, and pushing back against incitement to hatred and violence.’

This was the first Istanbul Process meeting to be held after a hiatus of three years. The previous full meeting of the Process was held in Singapore in 2016. Earlier in 2019, Denmark and the European Union (EU), with the support of URG, convened a ‘stocktaking meeting’ in Geneva to reflect on the first six meetings of the Istanbul Process, and revitalise international efforts to combat religious intolerance.

The seventh meeting of the Istanbul Process sought to continue the practitioner-centric approach established at the sixth meeting in Singapore. It provided a platform for practitioners from a cross-regional group of States, as well as other relevant stakeholders, to share practical policy experiences, good practices and lessons learnt in the promotion of religious tolerance and strengthened resilience, in the spirit of the action plan set down in Human Rights Council resolution 16/18.

After a high-level opening plenary, featuring a keynote address by H.E. Mr Stef Blok, Minister of Foreign Affairs of the Kingdom of the Netherlands, participants were divided between four breakout groups for more in-depth discussions. This format was designed to allow for greater interaction and practical exchange between different stakeholders from different regions.

The breakout discussions addressed two main themes and four subthemes. The aim was to cover all parts of the UN action plan on combatting religious intolerance, as set down in Council resolution 16/18. The key themes and subthemes were:

The gathering in The Hague also included (again a first for a meeting of the Istanbul Process) a gender session and a ‘marketplace’ where different organisations (including government agencies, police forces, museums, professional football clubs, NGOs and faith-based organisations, mainly – but not only – from The Netherlands), presented innovative projects designed to help combat religious intolerance, discrimination, stigmatisation, incitement to hatred and violence, and violence. The aim of the marketplace was to showcase practical case studies and good practices using interactive displays. It also strengthened the principle of ‘introspection’ in the Istanbul Process – i.e. the idea that participating States (especially hosts) should use meetings as an opportunity to reflect on their own challenges, as opposed to commenting on those of others.

This report seeks to summarise some of the key points made during each part of the meeting, and to collate some of the best practices shared in that context.