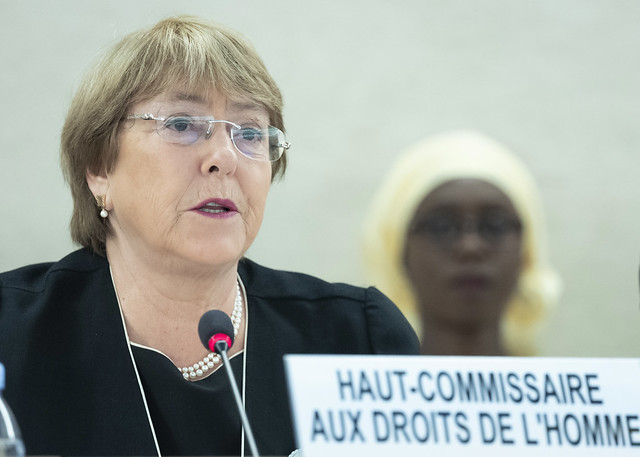 In February 2018, I published a blog on the early departure of the previous High Commissioner for Human Rights, Zeid Ra’ad Al Hussein. The blog responded to David Petrasek’s article in OpenGlobaRights entitled ‘Another one bites the dust’ (8 February 2018). The article attempted to look past Zeid’s stated reasons for leaving his post (in effect, that the worldwide retreat from human rights had made his position untenable) to the real underlying reason: namely the multifaceted nature of the High Commissioner’s mandate, a mandate that requires the mandate-holder to both publicly criticise States and to work closely with them within a relationship founded on trust. The title of the article was ‘Is being the UN High Commissioner for Human Rights an impossible job?’

This theme has attracted renewed interest over recent weeks following the current High Commissioner, Michelle Bachelet’s, announcement that she too will step down early (citing ‘personal reasons’).

In his analysis of Zeid’s tenure, Petrasek pointed to these inherent tensions in the different roles and responsibilities of the High Commissioner. The article rightly acknowledged that Zeid was a ‘prominent and eloquent spokesperson in defence of human rights, challenging states—even the most powerful—to live up to their commitments.’ However, Petrasek also noted that this outspokenness (let us call it public advocacy) may not have ‘made much difference’ to the global enjoyment of human rights, and that engaging in such public advocacy (as the ‘UN’s human rights conscience’) is only one part of the High Commissioner’s overall mandate.

As Petrasek argued, in addition to speaking out about human rights violations, the High Commissioner is also expected to ‘coordinat[e] the UN’s myriad human rights activities, pursu[e] an active – and perhaps less public – human rights diplomacy, and lead[…] efforts to reform often overlapping, outdated and cumbersome UN procedures.’ This raises the follow-up question: perhaps Zeid should have ‘spen[t] less time speaking out and more time strengthening and reforming both his Office and the [wider] UN human rights system.’ The conclusion reached in the article was that:

Although Petrasek’s article was principally a critique of Zeid’s tenure as High Commissioner, these last comments point to a more fundamental question, namely: ‘is the job do-able?’

Some parts (e.g., monitoring and speaking out) require the High Commissioner to remain aloof and independent from, and to publicly criticise, UN member States. Others (e.g., providing capacity-building support and technical assistance to States, engaging in dialogue and enhancing international cooperation, or advising States on reform of the UN human rights machinery) require a close, trustful and cooperative relationship with governments. Yet another part requires the High Commissioner to be the head of the secretariat of the Human Rights Council, its mechanisms, and the Treaty Bodies, (i.e., to be independent and impartial, and merely implement the decisions of States).

Is it possible for one person to wear all these hats at the same time? Can a single person publicly criticise States in one breath, then in the next reach out to them to forge agreement on reform of the UN human rights system or to provide human rights technical assistance? Does the role – and OHCHR – need to be split between the monitoring, technical assistance/cooperation, and secretariat functions? Should the High Commissioner have additional Deputies to take independent responsibility for some parts of his/her mandate?

The author of this article has made no secret of his belief (apparently shared by the UN Secretary-General, Antonio Guterres) that Zeid over-prioritised human rights monitoring and public advocacy, to the detriment of almost all other parts of his mandate. Yet for many other civil society representatives in Geneva and for many Western diplomats, this singlemindedness (together with Zeid’s natural eloquence) made the former High Commissioner something of a cult hero and the perfect High Commissioner. On the other hand, Zeid’s approach meant he was poorly regarded by most developing countries.

Fast forward four and a half years and Zeid replacement as High Commissioner, the former President of Chile Michelle Bachelet, has also fallen on her sword – yet for precisely the opposite reasons as Zeid.

Bachelet was handpicked by Guterres to mark a clear break from Zeid (who the Secretary-General did not like) by pursuing a more holistic and balanced approach to the role and mandate of the High Commissioner. In addition to public advocacy (which she continued, though far less frequently and forcefully than Zeid), Bachelet tried to emphasise human rights diplomacy, international cooperation, support for the international human rights machinery, a focus on emerging thematic human rights concerns (e.g., climate change, the right to a healthy environment, prevention, digital technology), and the on-the-ground delivery of technical assistance and capacity-building support.

In many ways she succeeded, yet she has been repeatedly criticised for not going far enough in her public criticism of States accused of serious human rights violations. Such criticisms reached a new crescendo over the past month following her ill-fated visit to China and her parallel decision not to publish a long-awaited report on human rights violations in China, especially against the Uighur minority. While some of that criticism was undoubtedly justified (her press statement at the end of the visit was poorly drafted and poorly pitched), most of the anger directed at Bachelet, especially by Western States and NGOs, was caused by a more fundamental issue: namely that, to their mind, she too often favoured quiet diplomacy, international cooperation, and supporting the human rights machinery to do its job, over and above public advocacy.