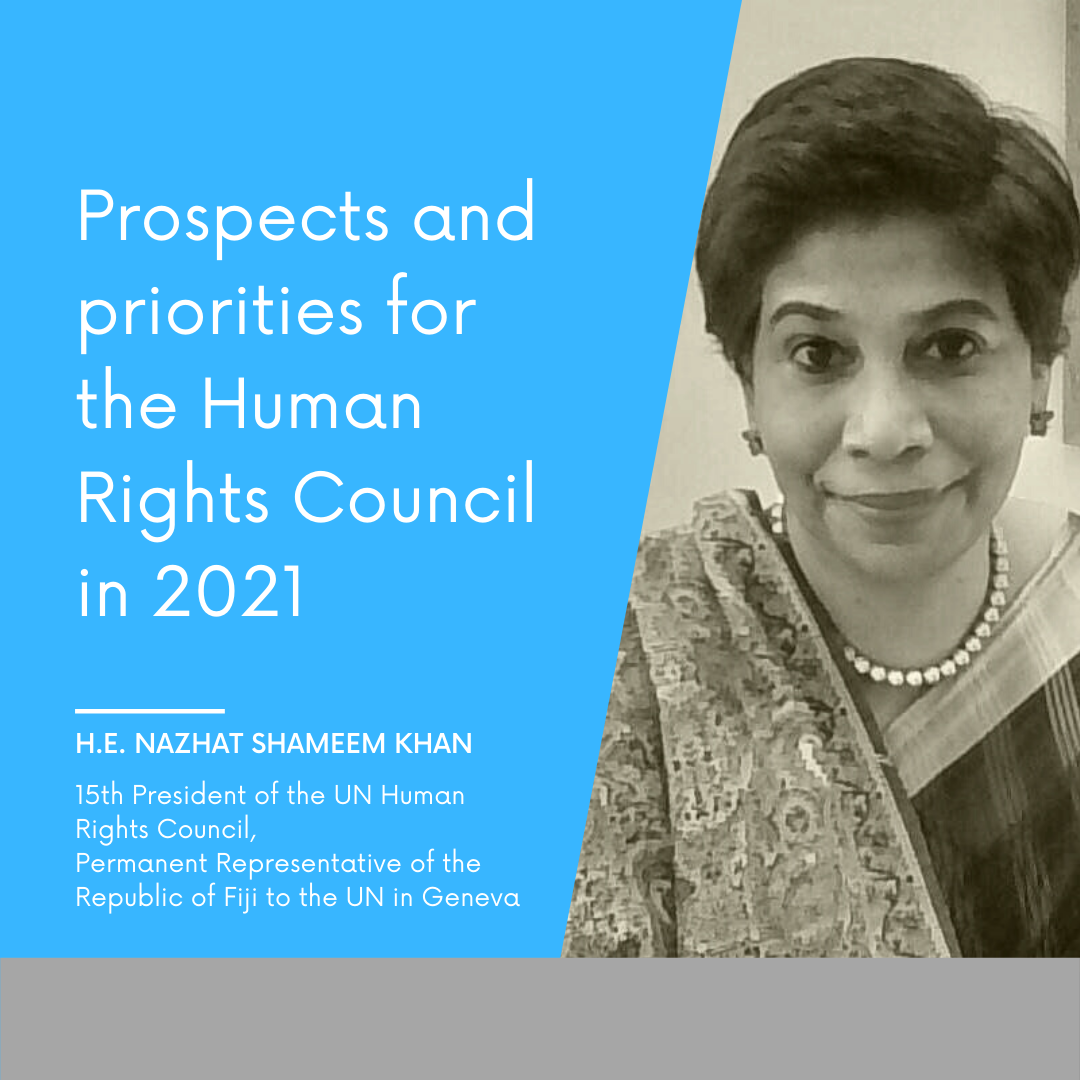 It is my distinct pleasure to wish you bula vinaka, the traditional Fijian greeting, meaning, roughly, ‘happiness and good health,’ as we begin a new year at the Human Rights Council. It is a singular honour for me, and for the government and people of Fiji, that the members of the Human Rights Council have placed their trust in me to steer the work of this august and globally important body for the year 2021. My election also, I believe, sends out an important and positive message about the inclusiveness of the Council – marking, as it does, the first time a Pacific Small Island State, and indeed any Small Island Developing State (SIDS), has assumed the Presidency, as well as about multilateralism in general – a system of international relations that allows all countries, irrespective of size or wealth, to have a voice in global affairs.

I am particularly proud to have been passed the ‘Presidency baton’ by my good friend and colleague H.E. Elisabeth Tichy-Fisslberger of Austria. It goes without saying that 2020 was an unusual and incredibly challenging year. Yet despite everything thrown at her, Elisabeth kept the wheels of the international human rights machinery turning smoothly, and for that she, her team in the Office of the President, the 2020 Bureau and the secretariat deserve enormous credit. 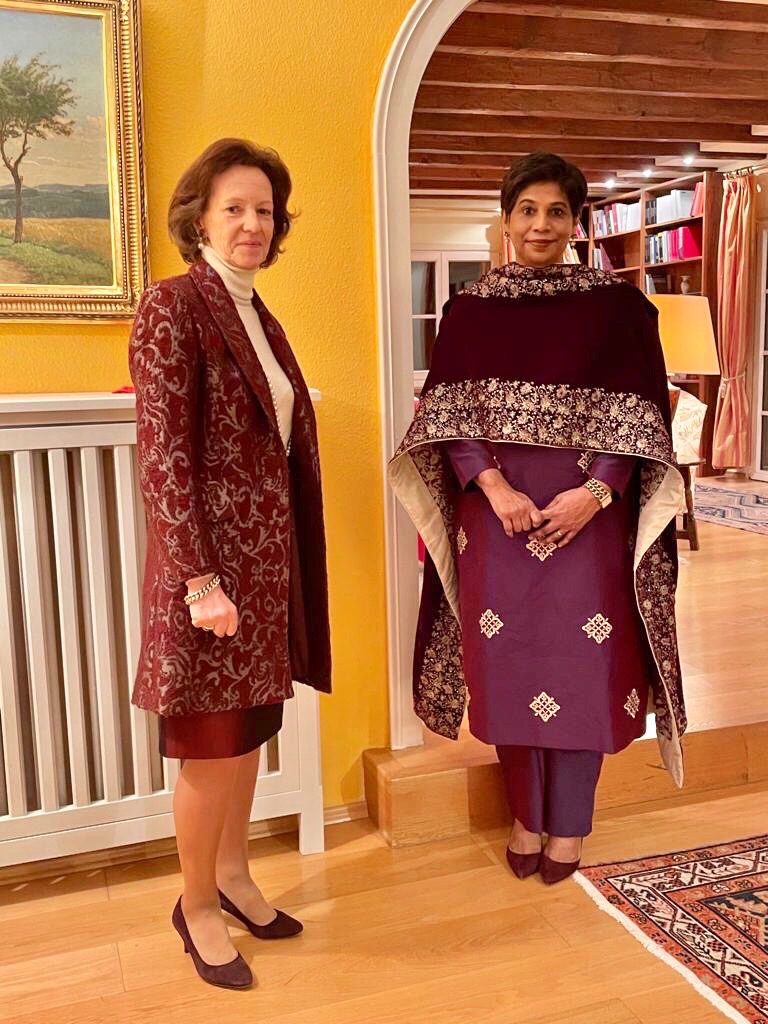 Talking of Bureaus, I am greatly looking forward to serving, in the year ahead, alongside an exceptional group of Vice-Presidents, namely H.E. Monique T.G. Van Daalen of the Netherlands, H.E. Ali Ibn Abi Talib Abdelrahman Mahmoud of Sudan, H.E. Ms Keva Lorraine Bain of the Bahamas (a representative of another SIDS), and H.E Yuri Borissov Sterk of Bulgaria.

Like many of you, I was not too saddened to see the back of 2020. The year just passed will forever be associated with the terrible pandemic that swept – and indeed, continues to sweep – the world. As the General Assembly has recognised, the pandemic is one of the greatest global challenges ever faced by the United Nations. It has wrought terrible damage in terms of human health and loss of life (over 2.1 million have tragically fallen victim to the virus), mental health and well-being, the enjoyment of human rights including the rights to education, to work and to an adequate standard of living, gender equality and women’s empowerment, and the exacerbation of economic and social inequalities within and between countries – reversing hard-won development gains and hampering progress towards the Sustainable Development Goals (SDGs).

While COVID-19 has certainly hit progress towards the full enjoyment of human rights and sustainable development, it is also true that the international human rights system and the 2030 Agenda for Sustainable Development, together, offer us a brightly-lit path out of the crisis. As the General Assembly, the Secretary-General and the High Commissioner for Human Rights have each recognised, the 2030 Agenda, underpinned by State obligations under the international human rights instruments, provide a ready-made blueprint for building back better from the pandemic. In the year ahead, the Human Rights Council has an important role to play, I believe, in cooperating with all States to place human rights at the heart of sustainable recovery, thereby driving transformative change towards more inclusive and just societies.

As well as posing immense challenges to the smooth functioning of the UN human rights system, reversing progress towards the SDGs and causing immense human suffering, the COVID-19 pandemic has also served to shine a spotlight on many of most serious pre-existing human rights challenges facing the world in the 21stcentury.

A first critical human rights concern that has long been forsaken – or at least downplayed – is inequality and poverty. Even before the pandemic took hold at the beginning of 2020, Oxfam reported that the world’s 2,153 billionaires had amassed more wealth than the 4.6 billion people who make up 60 percent of the planet’s population. The 22 richest men in the world had more wealth than all the women in Africa. The situation has worsened over the past twelve months. In a new report published a few weeks ago, Oxfam shows that the world’s ten richest men have seen their combined wealth increase by half a trillion dollars since the pandemic began – more than enough to pay for a COVID-19 vaccine for everyone and to ensure no one is pushed into poverty by the pandemic. At the same time, the pandemic has ushered in the worst job crisis in over 90 years with hundreds of millions of people now underemployed or out of work. All of this means that socio-economic inequality is due to grow in almost every UN member State – the first time this has happened since records began over a century ago.

A second major human rights challenge further exposed by the pandemic relates to climate and environmental justice – existential concerns for Small Island Developing States such as Fiji. In the last six months alone, whilst the islands of the Pacific are grappling with the economic and health consequences of COVID19, the region has endured a series of tropical cyclones, doing immense harm to infrastructure and the livelihoods of thousands.

The emergence and spread of the virus have exposed the consequences of humanity’s failure to address the climate, biodiversity and environmental crises facing the world. It is therefore crucial, as we seek to build a better future for all post-pandemic, that the international community adopts a climate- and environment-sensitive approach to COVID-19 recovery efforts, including by aligning investments and domestic policies with the 2030 Agenda and the Paris Agreement on climate change, and by reversing biodiversity loss. Here again, I believe the Council has an important role to play. Through its resolutions and the work of its Special Procedures, we have repeatedly drawn attention to the significant negative impacts of climate change and environmental degradation on the enjoyment of human rights – especially for the most vulnerable in society; as well as to the potential of human rights obligations and commitments to inform and strengthen international and national policymaking in the area of climate change and environmental protection, promoting policy coherence, legitimacy and sustainable outcomes.

This critical inter-relationship between the natural environment and human rights was a source of regular debate at the Council in 2020. For example, the Secretary-General’s ‘Call to Action’ on human rights, presented to the Council in February, urged States to focus greater attention on the rights of future generations, especially in the context of climate justice. ‘The climate emergency threatens the rights and dignity not only of millions of people worldwide but also of people not yet born,’ he noted. ‘It threatens the very survival of some Member States, especially small island developing countries.’ Likewise, during the Council’s 44th session in June-July, the High Commissioner for Human Rights said: ‘It is time for global recognition of the human right to a healthy environment – recognition that can lead to stronger policies, at all levels, to protect our planet and our children.’

Beyond the impacts of, and recovery from, the COVID-19 pandemic, there are a number of institutional matters that will occupy States’ attention in the year ahead.

The first is the 2021-2026 General Assembly review of the Council’s status (i.e., whether it should remain a subsidiary body or become a main body of the United Nations), as per GA resolution 65/281. Although the GA did not formally request the Council to conduct a review of its work and functioning in advance of this status review, before the pandemic hit there were a number of discussions here in Geneva, including under the authority of the 13th President of the Council, H.E. Coly Seck, as well as in the context of the sixth Glion Human Rights Dialogue, during which many States expressed a view that the Council should be ready to contribute when asked to do so by the GA. I look forward to hearing the further reflections of States and civil society in the months ahead.

Second, the election of a SIDS representative as President of the Council and the election of another as Vice-President for the Latin American and Caribbean Group, coming just two years after a Least Developed Country (LDC), Senegal was also elected President, demonstrate, I believe, the increasingly inclusive and representative nature of the UN’s principal human rights body. It also shows the enormous value of the Council’s technical assistance and capacity-building work. A good example of the latter point is the Council’s LDC-SIDS Trust Fund, a mechanism that has benefited nearly every LDC and SIDS, including Senegal, Fiji and Bahamas, and allowed us to engage more closely and effectively with the international human rights machinery. I hope that the election of two SIDS to the 2021 Bureau will encourage the Council to continue and expand such capacity-building initiatives, and will encourage more LDCs and SIDS to consider running for membership and, eventually, also serving as President or Vice-President.

GA resolution 60/251 establishing the Council, makes clear that our work shall be guided by the principles of universality, impartiality, objectivity and non-selectivity, constructive international dialogue and cooperation. I will do by best, in the year ahead, to ensure that the Council lives up to this ideal, and that it fulfils its critical mandate to ‘promot[e] universal respect for the protection of all human rights and fundamental freedoms for all, without distinction of any kind and in a fair and equal manner.’

In that regard, I look forward to working closely and cooperatively with all States – members and observers of the Council – as well as the High Commissioner and her Office, independent experts, and civil society. On the last point, I commit to doing everything I can to safeguard civil society space and to defend the rights of NGOs and human rights defenders who seek to cooperate with this body and its mechanisms.